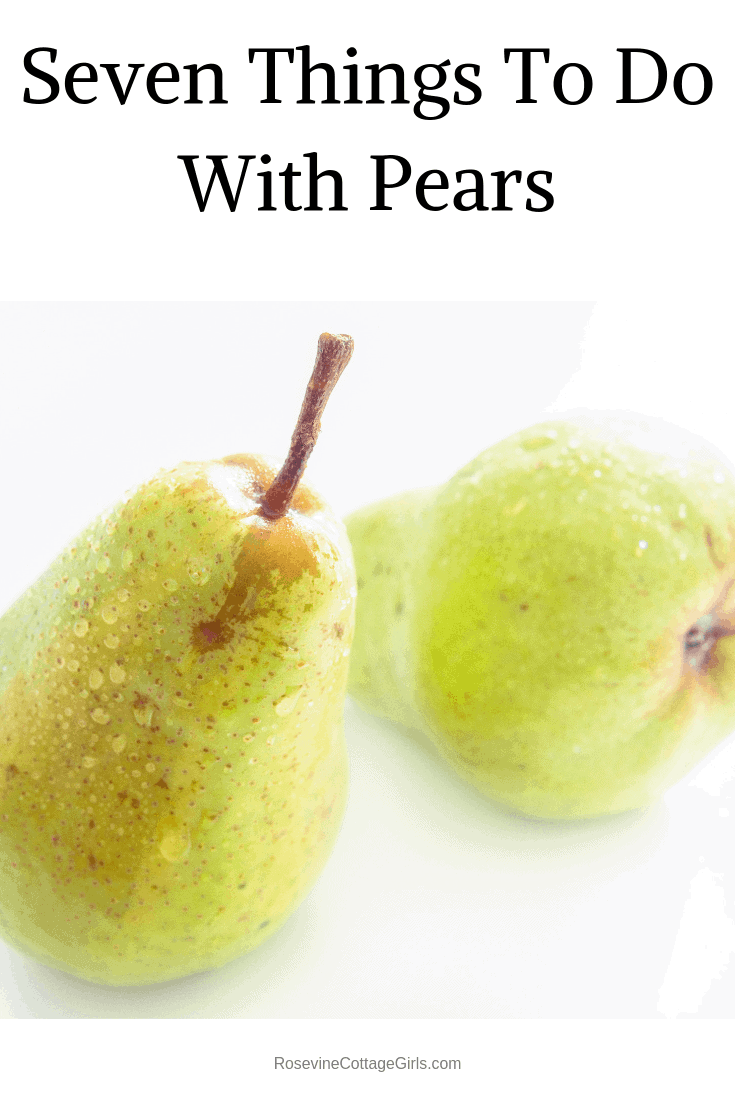 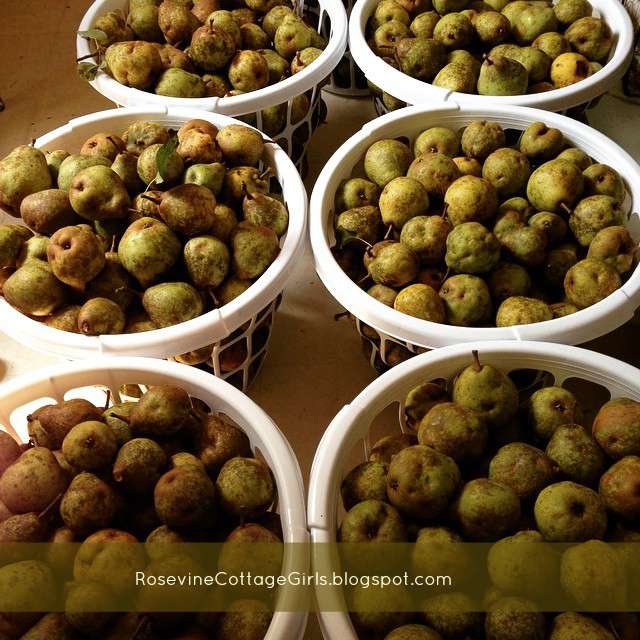 We have a bumper crop of pears so we wanted to share a few things that we do with ours every year and the delicious pear recipes that our family loves.

2 1/2 -3 1/2 pounds pears per quart
water
sugar (optional)
Wash apples, drain, peel, core & quarter pears. Cook pears until soft in a large covered pan, with just enough water, to prevent sticking. Puree pears, then return them to a saucepot. Add 1/4 cup sugar per pound of apples or to taste. Bring to a boil and stir to prevent sticking. Maintain at a boil, while filling jars. Ladle sauce into jars leaving 1/2 inch head space. Remove air bubbles, put the lid on top and adjust the ring on top. Process pints & quarts for 20 minutes in a boiling-water canner.

Wash pears; cut into halves, core, peel. Treat with fresh-fruit to prevent darkening, drain rinse and drain again. Cook pears in water one layer at a time until hot. Heat juice until just to a boil. Pack hot pears into pint jars cavity side down leaving 1/2 inch head space. Place a cinnamon stick in each jar. Ladle hot juice over pears again leaving 1/2 inch head space. Remove air bubbles, wipe the rim of the jar with a cloth or paper towel, put the lid on top and adjust the ring on top.  Process in a boiling-water canner for 20 minutes.

Butter: combine pear pulp and sugar in a large saucepot. Stir until sugar dissolves, add orange juice and orange peel. Cook until thick enough to round up on a spoon, stir frequently to avoid it sticking. Ladle butter into jars leaving 1/4 inch headspace. Remove air bubbles, put the lid on and adjust the ring on top. Process 10 minutes in a boiling-water canner.

Wash, peel, core and slice pears. Treat with Fruit-Fresh to keep from browning, combine sugar, flour & spices. Rinse, drain and stir into sugar mixture. Let stand until juices begin to flow (about 30 minutes) Stir in lemon juice. Cook over medium heat until it begins to thicken. Ladle pie filling into freezer safe containers and allow to cool at room temperature. Label and freeze.

Check out our Amazon Storefront for all of our kitchen essentials and supplies you’ll need.