Spread the love
Alone…
The word itself seems lonely.
God says it is not good for man to be alone and yet for centuries monks and wise men have sought solitude and the silence of aloneness to seek him away from the hustle and bustle of living life. 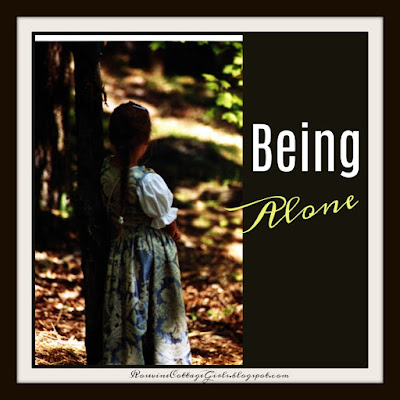 Some cherish it, others fear the chill of the silence of it. What is it about being alone that excites us or throws us into a panic.

Webster’s 1828 Dictionary ALONE, adjective [all and one.]1. Single; solitary; without the presence of another; applied to a person or thing.It is not good that man should be alone Genesis 2:18.[This adjective follows its noun.]2. It is applied to two or more persons or things, when separate from others, in a place or condition by themselves; without company.And when they were alone he expounded all things to his disciples. Mark 4:10.3. Only. Thou whose name alone is Jehovah. Psalms 83:18.This sense at first appears to be adverbial, but really is not; whose name single, solitary, without another, is Jehovah.To let alone is to suffer to rest; to forbear molesting or meddling with; to suffer to remain in its present state. alone in this phrase, is an adjective, the word to which it refers being omitted; let me alone; let them alone; let it alone; that is, suffer it to be unmolested, or to remain as it is, or let it remain by itself.

Young mothers know the pull of the need for aloneness. Little hands pull at her pant legs and little voices call to her from all over the house needing her immediate attention to the point where she feels there is nothing left of her at the end of the day. She longs for moments of aloneness to regroup and refresh so that she can once again pour herself into the little ones around her.

Contents hide
1 Related Posts: Read Our Devotionals Here
2 Two are better than one; because they have a good reward for their labour. For if they fall, the one will lift up his fellow: but woe to him that is alone when he falleth; for he hath not another to help him up. Ecclesiastes 4:9-10 KJV
3 Need a new recipe: Try our recipe section for some great ideas
4 Related posts:
The business person working all of the overtime the company piles on that they almost have forgotten what the family looks like much less a trip to the lake or the beach. Kicking back and soaking in the fresh air and sunshine on a summer afternoon. Alone time sounds pretty good, with all of those demands breathing down your neck.

Two are better than one; because they have a good reward for their labour. For if they fall, the one will lift up his fellow: but woe to him that is alone when he falleth; for he hath not another to help him up. Ecclesiastes 4:9-10 KJV

Is it really alone time that we seek? Or is it peace? A second to catch our breath before the next “crisis” hits. Is it alone time, or a moment to recharge, to fill your own pitcher so you can continue to pour into others.

Alone, we say that like it’s a bad thing. Like it is something to be feared to be avoided, but maybe alone is just where we are supposed to be. Because when we are quiet, when we are alone we can hear Him whispering to our hearts.
In the lonely hours of the early dawn, He finds you and holds you close. In the moments we feel lost, forgot alone are the moments your heavenly Father is drawing near. Listen to His voice, open your ears and your heart and soak in his presence.

Alone is never bad when we are with Him.

Need a new recipe: Try our recipe section for some great ideas

Grace
When Blessings Turn Into Curses
Are You Where You're Meant To Be?

0 thoughts on “Being Alone”