Caleb in the Bible is a powerhouse in the old Testament that shines like a beacon through time to impact our lives even today. His faith, love of God, and courage are an example to us all as we follow God. There is so much we can learn from His life and wholehearted faith in God. 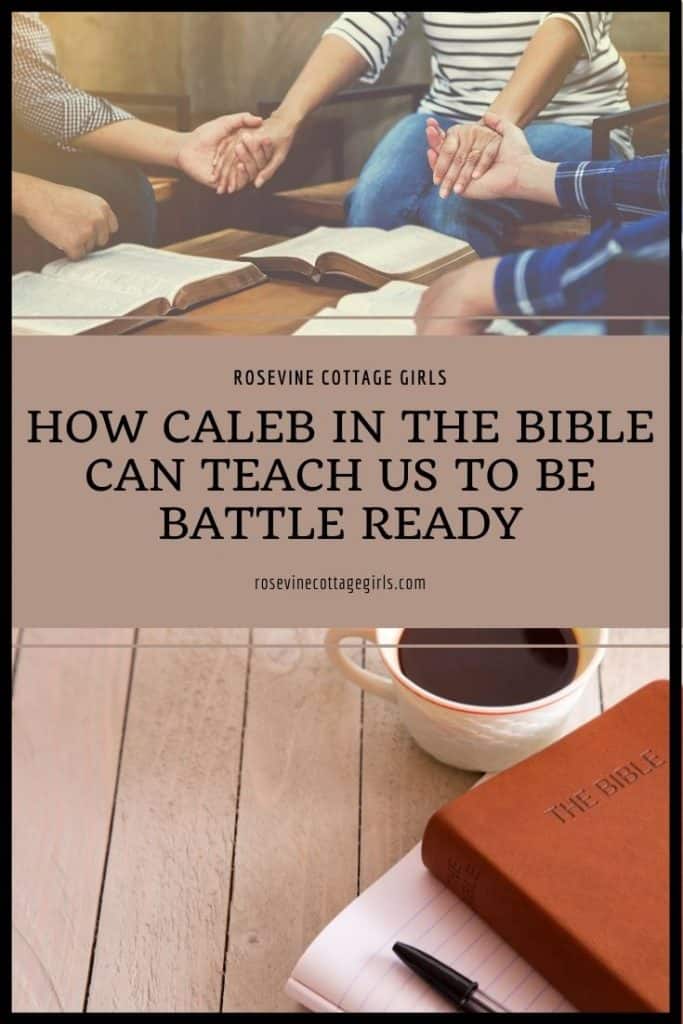 The Story Of Caleb In The Bible

We’ve been working our way through the dry seasons of the Bible, finding the lessons of the wastelands, and clinging to a promise that He will walk through this season with us. As we come to Joshua 14 it almost feels like the end.

The Israelite’s have entered the promised land. What they have been praying for, what they and their parents before them have been dreaming about is finally in their grasp- But it’s not over yet. They’re here, but getting here was only part of the problem. Just like they had to fight some battles in the desert, they now have some more to face before they can finally settle in the land. Part of God’s command was that they had to drive out the people who lived in this land. They have to bring down some strongholds and conquer some things that have been holding them back.

They are experiencing the victory, but even as they are celebrating they are plunged into the next battle. Isn’t that how it goes sometimes? From the mountain to the valley with no chance to catch your breath. It would have been easy for them to say no more. We’re here. We’re done. But they’ve learned some lessons in the dry season, and their parents failed to listen they are obedient to follow the Lord’s commands to the last detail.

It’s here as Joshua divides the land between the tribes that Caleb in the Bible again enters our story. The last time we saw him, he was one of the spies that Moses sent to scout out this land. The bible says that he approaches Joshua, and calls to mind that first scouting trip. He reminds Joshua of how he was faithful and followed God wholeheartedly even when the others told the people it was impossible. He goes on to remind Joshua of a promise that Moses swore to him:

The land on which your feet have walked will be your inheritance and that of your children forever because you have followed the Lord my God wholeheartedly. Joshua 14:9 NIV

Who Was Caleb In The Bible?

Caleb in the Bible was a faithful man of God that we meet in the Old Testament. He was part of the tribe of Judah and represented that tribe of Israel when Moses sent spies into Canaan, He and Joshua were the only ones that brought back a favorable report to Moses. Because He was faithful to the Lord and trusted God’s promises, Caleb in the Bible along with Joshua are the only two men of the generation that left Egypt to enter the promised land after the Israelites rebelled against God and spent 40 years in the desert. Learn more about who Caleb in the Bible was.

Meaning Of The Name Caleb In The Bible

I love how names in the Bible hold so much meaning, and Caleb is no exception. Caleb (or COLEV pronounced in Hebrew) actually means “wholehearted” another translation could be “faithful”. How fitting that wholehearted is the name of a man who wholeheartedly followed after God and encouraged those around him to do the same.

What Did Caleb Do In The Bible?

Caleb in the Bible is only mentioned a couple of times, the first time is in Numbers when Moses sends the spies into the promised land, again his name comes up when the Lord tells Moses that only he and Joshua would be allowed to enter the promised land. The next time is in the book of Joshua, and that is the part of his story we are going to focus on.

Caleb and Joshua are two of my favorite Old Testament Bible characters. I love how they both are firmly planted on the promises of God and will not be shaken. They are so sure that God will do exactly what He said He would when He said He would that it doesn’t matter what their eyes tell them. It doesn’t matter how big the battle looks, how hard the fight. How long they have to wait for the promises of God to come to fruition.

What We Can Learn From Caleb In The Bible

There are so many important lessons that we can learn from Caleb in the Bible, but I think one of the most important is to be battle-ready. To keep the faith, even in the waiting season, and stand unshakably on God’s promises. No matter how long the wait. No matter how hard the battle. No matter the struggles between us and the promise. We must be ready to take the mountain…

Give Me The Mountain

Compared to the giants of the Old Testament Caleb’s quiet faith can slip through the cracks. Caleb in the Bible is now 85 years old because of other’s decisions he has been wandering through the wilderness clinging to a promise for the last 45 years. That a long time to wait. In fact, he and Joshua are the only ones left of their generation.

Caleb in the Bible comes to Joshua, and instead of asking for an easy place he asks for the very land that kept the Israelite’s in the desert for 40 years.

“… Just as the Lord promised, he has kept me alive for forty-five years… while Israel moved about in the wilderness. So here I am today, eighty-five years old! I am still as strong today as the day Moses sent me out; I’m just as vigorous to go out to battle now as I was then. Now give me this hill country that the Lord promised me that day. You yourself heard then that the Anakites were there and their cities were large and fortified, but, the Lord helping me, I will drive them out just as he said.” Joshua 14: 10-12 (NIV

He could have made an excuse, said he was too old, too tired, or asked for something easier. No one would have blamed him, but he has unfinished business with that hill country. He was still clinging to a promise that the Lord had given him 45 years earlier. The Lord had declared this place his, and He wants nothing less.

We often are so quick to beg off the hard battles, we don’t think we can win. They were afraid of looking like a fool because everyone said it was impossible. If they told Caleb in the Bible it was impossible the first time, can you imagine what they told him this time?

This hill country that Caleb in the Bible is requesting isn’t just a hill or a mountain. This isn’t just a few small towns, this isn’t going to be just difficult. This the area that turned the entire Israelite’s back into the wilderness to wander for 40 years. The cities are fortified, which means it won’t be easily conquered and it’s inhabited by giants. Yet he still asks for it. He is still clinging to that promise. He is still battle-ready and prepared to follow His God wherever He leads.

What Caleb Meant By Give Me This Mountain

This part of scripture can be such a rallying cry when we feel like giving up. In essence, Caleb in the Bible is saying give me the hill country, the fortified place that they said was impossible to conquer. I don’t want the easy route, you promised me this place, and you have never given me a reason to doubt you.

I don’t want the status quo, I don’t want to leave what the Lord has declared for me to someone else. This is my battle, and I have unfinished business with this mountain. Give me the mountain, I want everything that the Lord has promised me. I want to see the promises He gave me come to fruition. The Lord has declared this ground mine, He has delivered this mountain into my hands. The victory is already mine, they just don’t know it yet. My arms are tired, my head is weary but faith is strong and I’m not out of this fight yet.

What Lessons Can We Learn From Caleb In The Bible?

Caleb in the Bible gives us a wonderful picture of what wholeheartedly following after God without fear looks like. What believing that God will always see you through and will do what He says looks like and I don’t know about you but it’s rejuvenating.

What is your mountain? Over what have people spoken defeat in your life? Maybe it’s a dream or a relationship, but you felt God’s call here. Stop listening to their voices, hunker closer to Him, cling to your promise, and echo Caleb’s anthem… give me the hill country. I don’t want the easy because you are calling me to more and you will make the way.