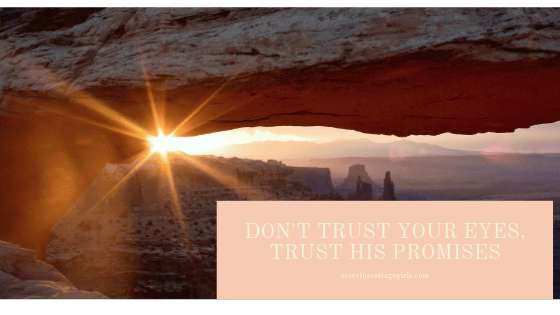 The Israelite’s are way into their desert journey toward the promised lands. They’ve faced battles, and witnessed His promises come to fruition, and have seen the glory of God come to rest on Mount Sinai in Exodus 24. They’ve got some experience under their belt, so it’s little surprise when God gives the word to move on and enter the promised land.

Walking In His Promises

I picture a scene from the end of Wagon Train episodes where the wagon master tells them to “Load ’em up and move’em out”. Can you tell I watch a lot of old westerns? So quickly their focus slips to what they physically can see and away from His promises

Trusting Him In The Wilderness

This is it! The end is in sight, they’re almost there. Like pulling on to your street after a  long trip, relief begins to flow. The trip is almost finished! How sweet those words must have felt! This journey is almost over! But, there always seems to be a but. Because the truth is life isn’t easy, and the home stretch is rarely a cake walk. What lays between them and everything they have been promised is scary. It tests what they’ve learned along this whole trip. The bible doesn’t go into great detail about this stretch of the trip, but it describes it as a terrible wilderness.

So close, yet so far

How many of us, thought we had had it made, and just when we thought it was over, the battle was finished, we found ourselves in a terrible wilderness? We weren’t expecting it and so it blindsides us, and it begins to chip away at everything we thought we knew. The experience we’ve earned seems small and everything we’ve been through up to this point pales in comparison to this place.

They can see their destination, what they have been fighting for, for so long is nearly in their grasp, and maybe in their heads, they thought this was going to be easier. Maybe they are still living off the high of winning the last battle, and they expect this place to be easy but when it’s not their confidence wavers.

Taking Our Eyes Off Of His Promises

We’ve won the last battle, we’ve seen what God can do and then suddenly our focus shifts and what we were so sure of begins to waver. Maybe we aren’t even sure what caused it, but something’s changed and we can’t put your finger on just what it is, but it feels different. 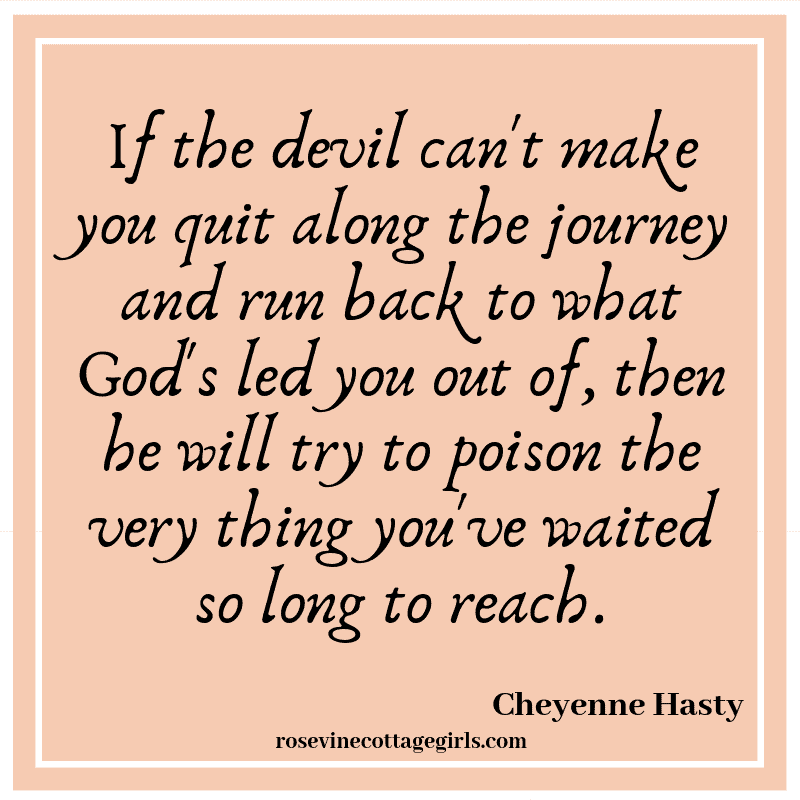 We just want to be done

We’re tired, and just want it to be over. We want to be done and move on, we are sick and tired of trekking through the desert. If the devil can’t make you quit along the journey and run back to what God’s led you out of, then he will try to poison the very thing you’ve waited so long to reach. I think this is where the Israelite’s found themselves, so close and yet so far and they just want to be done.

The Threshold Of His Promises

Like after a really long hike, your legs hurt, your tired, you can see your car and you just want to get there. You don’t want to have to fight your way up one more hill, you just want to be done. But here they are traveling through yet another wilderness. They finally reach the threshold of the promised land- the Bible says that God had set apart this land for them, it had their name on it, all they had to do was follow Him in- but they hesitate. 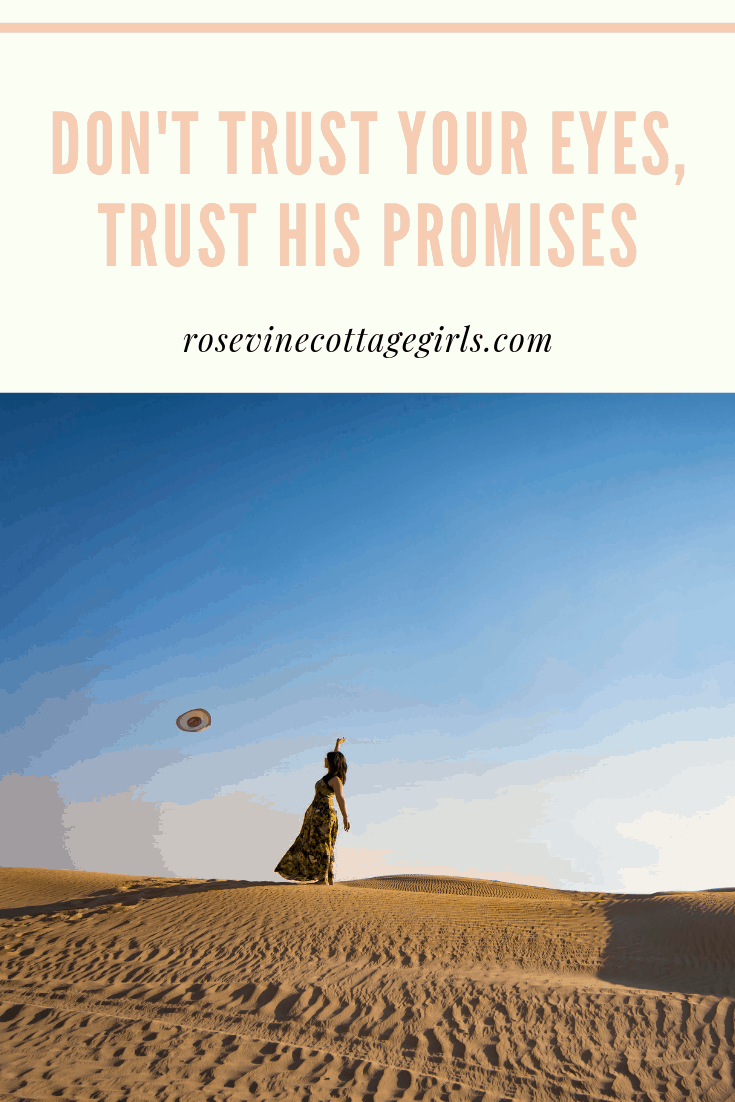 No sooner has the Lord told them to go take possession of what He has given them then the people come to Moses begging to send some men ahead to scout out the land. They want to send some people on ahead to find the best route and some nice cities to visit (Deuteronomy 1:22), they are done roughing it, no more off-roading, no more hills to climb, no more wondering if God’s going to come through. The pillar of fire they’ve been following is no longer good enough, they want more and just like that the lesson’s they have learned slip away.

They start to follow what they see, instead of trusting the one who has sustained them every step of the way. It’s easy to fault them, but I think we often do the same thing. We refuse to move until we ask everyone’s opinion. Needing our friend’s seal of approval before we can go any further. We need the whole agenda not just the next stop on this trip. Seeing the giants that stand before us. We set our focus on the walls that must be brought down and we doubt that He can do it. Even when He has been doing it this whole time.

Sure He came through back there… but what about this time? The age-old question pops back up, “Why didn’t you leave us in bondage? It would have been better than dying out here trying to beat something we can’t beat.” 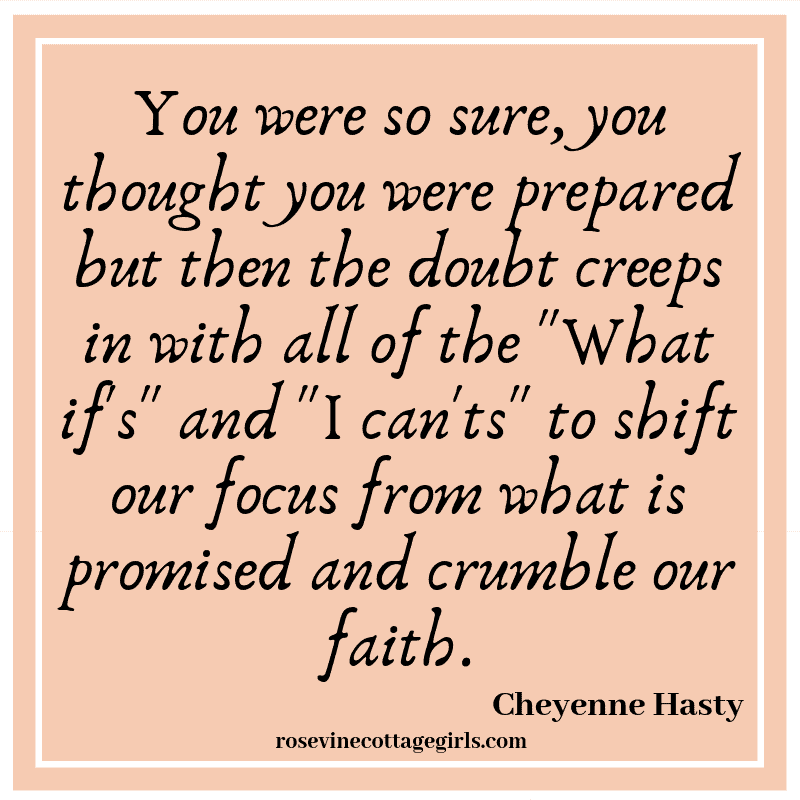 Their focus has changed and they are relying on their own understanding to guide them. Their eyes tell them it’s too hard, the scout’s report isn’t what they wanted to hear and doubt creeps in. Have you been here? You were so sure, you thought you were prepared but then the doubt creeps in with all of the “What if’s” and “I can’ts”. Trying to shift our focus from what is promised and crumble our faith.

They stopped trusting the Lord to lead the way. Believing that He knew the best route Trusting that He would pick the best place for them to camp each night and so they strike out on their own and then blame the Lord when they don’t like what they hear from the scouts. Where are you, God? What were you thinking? So often we find ourselves in this place. Because of our own foolishness when we try to run ahead instead of trusting that the Lord will yet again provide.

We come to verse 30 and find Moses trying to reassure the people. He is reminding them of who God has revealed Himself to be. That they should stop trusting their eyes and trust His promises. He reminds them of all the times He’s provided in vain.

The people have been piggybacking their faith in God on Moses, but that can only last so long. At some point, it has to be their faith. Anytime we place people in a role only God can fill, we are setting ourselves up for defeat. We can’t survive off of the faith of others. We can’t trust our own eye to guide us. 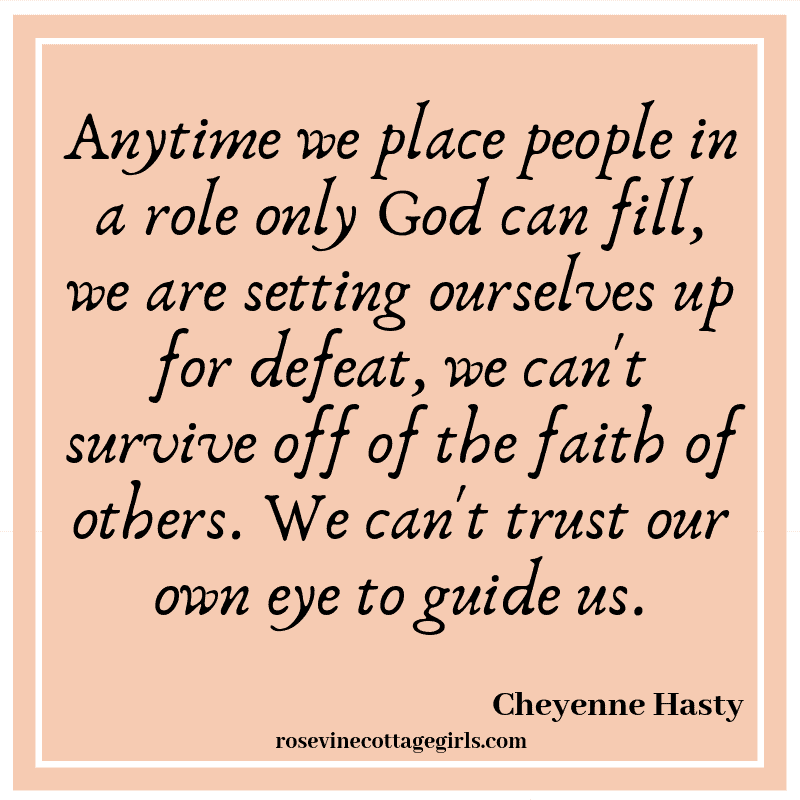 When We Stop Trusting His Promises

What started out as a simple “Here it is, go move in” has come to a screeching halt. Not even the reminder of everything they have gone through, or all of his promises can get it moving again. How often do we react like the Israelite’s? Reacting off of what we see instead of trusting that He will make a way? We don’t want to dive into the deep end, we want to dip our toe in first and check to see if the water is to our liking. And we look back to see how it compares to our life before while we were in bondage

We allow our focus to slip from the firm foundation that we’ve been building. Each time we’ve witnessed the Lord’s promises come through to the shifting sand. Suddenly we need to see the whole path instead of just the next step. We want to do a little sightseeing, maybe make a reservation or two so we don’t have to camp out anymore. The pillars of cloud and fire just aren’t good enough now, his promises fall flat. If He can make the Israelite’s win the battle because Moses is holding his staff over his head, why is it so different here?

Look back at all the times He’s fulfilled His promises

He provides over and over again, what makes us think that it will any different this time? Look at the callouses you’ve earned, the battle scars that mark that you have survived. Feel the salt water clinging to your skin as you walked through the parted sea on dry ground and remember. Look back and see all the places that He’s come through and then recenter your focus on Him.

Why Worry? Trust Him

It doesn’t matter what people think. Why worry how tall the walls are. You need not be concerned how hard this leg of the journey is because He’s already promised to go before you. He is bigger than anything you are going to face. Not one thing is going to touch you that hasn’t already passed through His hands. 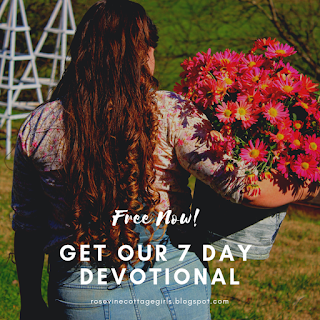 Check out these related posts

4 thoughts on “Don’t Trust Your Eyes, Trust His Promises”