The other day as I walked through the grocery store I kept running into a woman with a baby in a sling. It wasn’t a newborn, but still small enough to be carried like this. Safe and warm next to his mother’s heart. We didn’t speak, only for a moment, our lives touched as we passed each other. Unremarkable, forgettable in every way the need for an item on our lists the only thing drawing us to the same places. 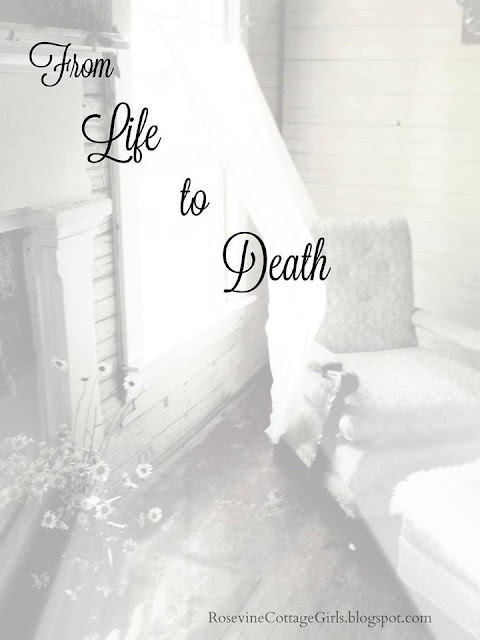 As we checked out I moved to the front of the store to be out of the way so someone else could take my spot on the narrow aisle. As I looked up, I found myself before this woman and her child again. The baby asleep until now, opened his eyes and looked up – with such a sweet indescribable look and reached up to touch his dear mommy’s face.

It struck me there in the middle of that busy store watching that mother and child that death is a lot like that. Falling asleep, safe and warm and loved- and waking in our Savior’s arms to touch his face. So many fear it, but really it’s nearly awe-inspiring. Walking with Him in this world, and waking as if from a dream in his arms safe all along. How beautiful is that? I’m reminded of the line from Peter Pan – Death is an awfully big adventure. Perhaps life is the big adventure, and death is simply the waking up, to find you never left the palm of His hand.

I remember watching A Man Called Peter, in one of his sermons he was talking to a group of cadets getting ready to go to war. He began to tell a story of a little boy with a terminal illness, and the doctor told the mother he didn’t have long to live. The little boy asked his mother what dying was like, and after hurrying to the kitchen to tend a pot and beg for the right words she returned. She told him it was like when he fell asleep in her bed after a long day of playing. And waking to find your daddy had taken you in his strong safe arms and carried your own bed.

No fear, only peace… and waking in your father’s arms.