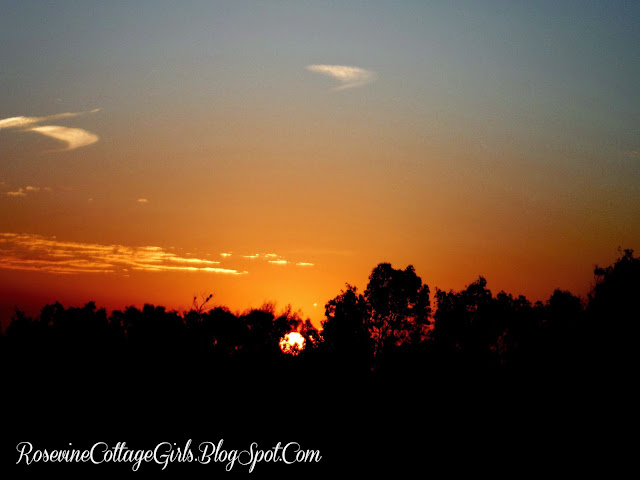 We woke up early… The house is so quiet. Brianna and I stand in the bathroom getting dressed and sharing a small mirror to put on makeup… the small window is open and a bird is singing softly. The sunrise is so beautiful. Brianna runs and grabs the camera out of my purse.

Dad and Uncle Paul call us to breakfast. Brianna races down the stairs, I snag my high-heels on the way out the door. Aunt Debbie smiles slightly at me as I walk by her door heading for the steps. “Good morning” She says. Then I’m sitting on a stool at the breakfast bar explaining to Uncle Paul that no matter how “healthy” fried eggs are I don’t want one, but I would like some potatoes and bacon. Sunlight streams through the windows. The house is so quiet compared to last night. My Aunt Lisa walks through almost in tears and heads up stairs to get ready. Bacon sizzles away on the stove. Even Uncle Paul seems to be trying extra hard to be his normal funny self. But how do you laugh and look on the bright side on a day like this? When all you want to do is curl in a ball and cry.
Uncle Paul asks where his wife is and then yells “Honey?” Mr. Cottage answers and he starts laughing saying he doesn’t like Mr. Cottage THAT much. We have to find money to pay the Pianist, pastor and lights and sound guys. Aunt Debbie paces in one taller blue high-heel one shorter tan high-heel. It would be funny any other day…  Down stairs my uncles are discussing a what my electrician uncle calls a “prehistoric” light fixture that my plummer uncle says needs to be changed. Those two… Its 10:30, time to head to church. We pile in the cars, Aunt Debbie calling out last minute instructions. We slip quickly into traffic and before I know it we’re at the church. It’s drizzling, Uncle Paul and Uncle Doug drove separately and have all the umbrellas. Aunt Debbie is waiting in the car for Uncle Doug to arrive with an umbrella so she doesn’t ruin her hair style on the way in. I silently wonder how fast I can walk in these high-heels… oh well too late to change now. 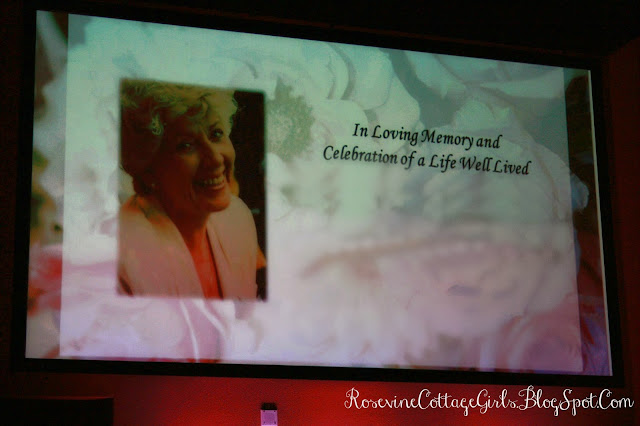 People begin arriving, most I haven’t seen since I was two. I recognize my aunts and uncles and a few cousins, but for the most part I can’t remember anyone. I hug them anyway as they step up and say “I haven’t seen you since you were this high” and they hold up their hands. I’m sucking on cough drops like they are candy… every time they melt I start coughing again. It’s time to go in and sit down, most people already have. We make our way down to the front row “the spit zone” as our old pastor called it and join the rest of the family. Uncle Paul looks at the flyer thing they handed us when we walked in, then leans over and whispers to Mr. Cottage “Hey I want to share memories, I have a great one’s of us…” I can only imagine what he would say… I love him but a filter he does not have. Mr. Cottage chuckles. I start coughing again as I drag out another cough drop. My cousin leans forward and asks if I’m ok, I nod because I’m still coughing. When I can finally answer her I tell her I have a cold and she gives me a sad face, another cousin behind me whispers that she does too.
The service starts with a picture slide show video and music because the pastor is late. “Aww’s” and chuckles alternate as the photos scroll across the screen… so many good years. Two of my cousins start sobbing holding each other.  Finally the pastor arrives, he says something short and then Aunt Debbie stands up and shares her favorite memories. She pulls out a letter from a cousin in the mid west that could not attend. Tears slip down everyone’s cheeks. Aunt Debbie stops, trying so hard to get through it and not start sobbing as she speaks. She takes a deep breath and starts again. Than my cousin Eric stands and says how much he loved Grandma and that she was an amazing woman. His brother Shane takes his place, and tells everyone about a time Grandma Cottage was trying to get him to take a nap as a kid. He kept begging her not to make him sleep, that he wasn’t tired. He told us that she was standing behind a see-through canopy with the light from the window behind her. And she just said close your eyes for a moment. He started crying again and had to stop for a minute before he could go on. “And she just looked so beautiful…” Then he talked about how she took him to school on his first day of kindergarten and he was so scared and didn’t want to go. She sat in the back of the class for a while and then suddenly he turned around and she was gone. He got up and ran out in the hall shouting “Grandma! Grandma!” when he caught her he said what are you doing? You can’t go! So she came back with him and sat for a while longer until he wasn’t paying attention and slipped away silently.
The room was quiet again, no one else stood to talk.  The only noise was quiet crying and the crinkle of tissue wiping tears.  Just before the pastor stood up again Mrs. Cottage stood up and turned around surprising me. “I just want you to know how much she loved you… You guys were her life. She never met a single person who wasn’t family to her. You came to the house you were not or a visitor but you were family. Stranger, school mate, co-worker, roommate, sailor you were family. She prayed for you guys every single day… right up to the end. A while ago she told me ‘I just want to see everyone there, I want everyone to be together.’ So be there. Please. Be there…” Then the pastor stood up and spoke but I can’t remember what he said because I was crying too hard. My single Kleenex has turned to a wad of it. Then we all made our way out… a tear sodden mess. The reception is at my Cousin Eric’s house down the street… we start a long caravan of cars all headed for the same place. We pull in the driveway and Mr. Cottage hops out to direct parking… turning the end of the street into a parking lot. It’s kind of funny to watch. Especially when Uncle Paul and Uncle Doug pull in… I don’t think those two could follow directions if they wanted to.
*** 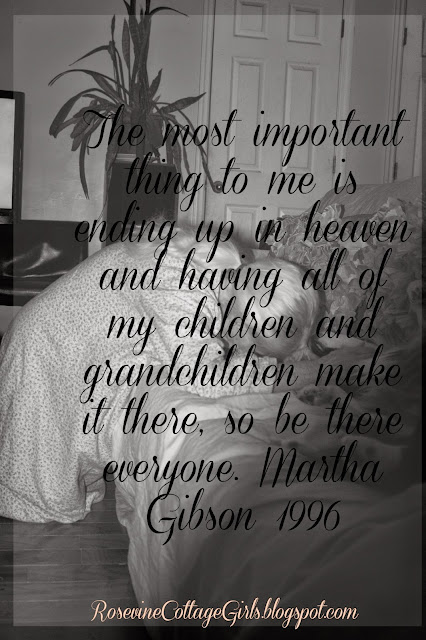 Martha known to friends as “Marty”, “Mom” or simply “Grandma” was born to Lula and Alfred.  She was the youngest of 8 children. She married her sweet-heart Claude a U.S Navy Veteran that served in WWII, in Ohio. They had six children together.

Those that were privileged enough to meet her instantly fell in love with her amazing heart and immediately felt welcome in her presence. She was quick with a bright smile, a warm hug, a witty come back and a larger than life sweet-tooth. She was first and foremost a Christian and could often be found on her knees in prayer for her family and those she loved.  Her God and her family always came first. She often sat at the kitchen table reading her bible until the day that her eyes failed her and she could no longer read the print. It broke her heart.

On November 20 surrounded by her loved ones she fell victim to the grim monster that calls when we least expect it, death. With whom she has struggled with for several days. The end came around 10:45 AM. which is really not the end… but a beginning of a life which is eternal. Here is where she waits for her family and dances with those that she loved so dearly who have passed before her. Many prayed that this amazing lady would stay with them for many more years but her summons had come and she had to obey. Though her family and friends mourn the loss of such an amazing lady they rejoice in the fact that she is not lost, but waiting for them to join her.

Marty is predeceased by her husband, Claude and her daughter Tina and all of her sisters, but her legacy survives in her 5 remaining children, 17 grandchildren, 20 great-grandchildren and countless others she considered family. Whether a family friend, an orphan, a homeless soul or a sailor hundreds of miles from home; we live on to tell of her love.  When asked her greatest wish she was quick to say that all of her family would meet her in heaven.

May the God of grace and mercy comfort the hearts that loved her, and mend the broken hearts until they are all together again…

Keep up with our adventures. Day 2 Day 4