Skip to content
Hope.
Like a knot at the end of a rope, it is something to cling to.
Hope… so many hurting around us that need it.
The thought that they are not alone in the middle of the night when the darkness closes in and all hope seems to have fled. Evaporating when they needed it the most.

When You Need Hope

Contents hide
1 When You Need Hope
2 He Is Our Hope
3 He Knows Everything That Has Been Done To You
4 He Understands
5 He Brings Restoration
6 We Are To Bring The Good News
7 Love Those He Brings
7.1 Before you go, Check out these other articles

I called out of my distress to the LORD, And He answered me. Jonah 2:2 NIV

I called… and He answered me. How amazing is that? That a big God that literally spoke everything into existence finds the time to bend close when I call out in the midst of my pain and hurt and anger. He bends close and listens to the tears, the heartbreak the sorrow. He doesn’t just hear me, but he listens to me and He answers.

Because he bends down to listen, I will pray as long as I have breath! Psalm 116:2 NLT

He Is Our Hope

He is our hope when the world has passed us by, leaving us in the dark hurting. God sees us in the dark of night when all you want to do is give up. When the devil creeps in close and whispers his lies to our heart. He hears us when we sit in the waiting room of a hospital crying out in agony “why”. He hears the quick prayer to look after your children as the race out the door to school or to hang out with friends. Not one moment has he ever left you, ignored you, not hear you. He hears…

Captain, I have known my Lord for more than 50 years and there is not one instance that I have failed to have an audience with the King Get up, captain for you will find the fog has gone… ~ Muller

He Knows Everything That Has Been Done To You

A few weeks ago our pastor was preaching about the woman at the well in the bible (if you aren’t familiar with this story check it out HERE), in his sermon prep, he talked with a friend that is one of the leading Hebraic teachers in Israel. He believes that the American translations miss the meaning of this verse Then, leaving her water jar, the woman went back to the town and said to the people,  “Come, see a man who told me everything I ever did… John 4:28-29, that it should be I’ve met a man who’s told me everything that has ever been done to me. Wow! Doesn’t that change how you look at that woman? As she ran to the others, those that despised her so much that he had to go and get water at the hottest time of the day just so she wouldn’t run into them. I can almost see her now…

Her head poking through her door as she quickly checks both ends of the street ensuring no one is in sight before slipping out into the street clutching her water jug tightly. Dust swirls around her sandals as the sun beats down on her head. Her scalp tingles under its searing glare, so much like her neighbors. Finally, she reaches the well only to find she hadn’t waited long enough but it takes to much energy to return home empty handed and so she approaches that well her mouth longing for a cool drink. She tries not to make eye contact so she won’t have to see his disgust.

The jug nearly slips from her hands as he asks her for a drink. Her words tremble as she answers him “You are a Jew and I am a Samaritan woman. How can you ask me for a drink?” (V9)

Jesus answered her, “If you knew the gift of God and who it is that asks you for a drink, you would have asked him and he would have given you living water” John 4:10 NIV

He spoke to her, not judging, not condescending but spoke to her. Jesus saw the dirt and the mistakes, the ugly and the broken places. The things she locked up tightly so that no one would see, He saw the words seared into her soul like a brand Worthless. Unloveable. Garbage. He saw her, and he opened his arms to her all the same.

John only tells a bit of their conversation but can you imagine how that went? As piece by piece He pulled those words and the abuse, and the ugly broken places from her “closet” and told her things that no one else but her could know. Before he set the moon and sun in the sky and separated the land from the water he saw every man that would abuse her and throw her away as garbage, every word that would crush her spirit, every sneer she received as she made her way to that well from the “good girls”. He saw every tear in the dead of night. Jesus saw it all and brought it into perspective. God made sense of the pain, he took everything and brought it to a point that He could restore what the locusts had devoured. He became hope in her hopeless life.

Restoration doesn’t happen overnight, Job didn’t get his same possessions and the same children back. Restoration doesn’t always look like what we think it should. I think sometimes restoration looks like you racing after God, and pointing all those people who despised you back to Him and crying come meet the one who told me everything that has ever been done to me, everything I have ever done that I never wanted the world to know and loved me all the same. 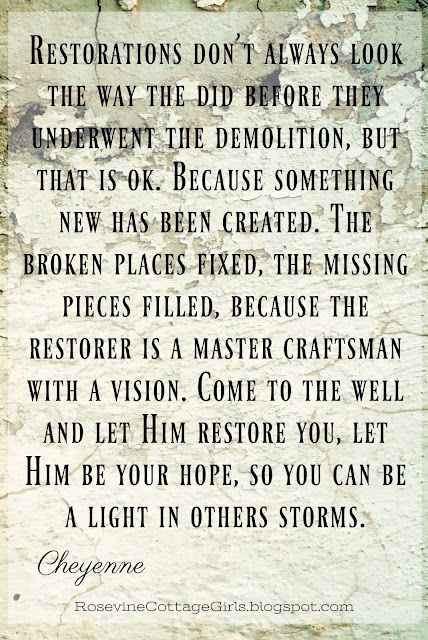 Restoration doesn’t always look the way the did before they underwent the demolition, but that is ok. Because in the restoration, something new has been created. The broken places fixed, the missing pieces filled, because the restorer is a master craftsman with a vision. Come to the well and let Him restore you, let Him be your hope, so you can be a light in others storms. The townspeople would never have known to come to the well if she hadn’t come first.

We Are To Bring The Good News

We are to be the salt and light in this world. To light the darkness like a city on a hill and to give flavor to the world by sharing the good news of the gospel. But if we do not do our jobs but dim our lives so that we blend in with the world and not give flavor, what use are we to those that are hurting? We are vessels of the truth, the good news. Let us not be ashamed to share it.

May the God of hope fill you with all joy and peace as you trust in him, so that you may overflow with hope by the power of the Holy Spirit. Romans 15:13 NIV

Love Those He Brings

Do not forget to love those he brings to us and pray for those that are hurting around us.

It is a battle out there. There are casualties all around us. Shall we walk over the wounded or shall we bend down and lift up our fellow brothers.

Before you go, Check out these other articles

0 thoughts on “He Is Our Hope”