He makes me enough

The other day someone asked me if I still did “that little blog thing?” and if that’s all I planned to do with my life.

I had two reactions to that, first, it showed me that they obviously weren’t following the blog and second, I yet again didn’t measure up. I wasn’t good enough. As much as I want to shrug off their words, put on a pair of cute heels and some jazz and carry on, the truth is I want them to be proud of me. To celebrate our accomplishments. To have the scale tip, and let me be good enough in their eyes.

When You Feel You Are Not Enough

The truth is I’ll never be what THEY THINK I should be because that’s not where HE wants me. I don’t have to change because I am loved just the way I am. I don’t have to find approval with them because I’ve already found it with the King of Kings.

How quickly we forget this. We get caught up trying to achieve their approval, instead of following Him. We fixate on tipping their scale in our favor, piling on “achievements” but always falling short. 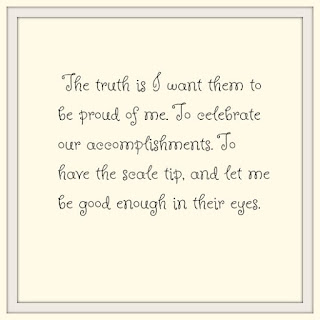 Chances are their scale will never tip in our favor, we probably won’t ever measure up to their standard. The truth is, we aren’t enough but God sweeps in and fills the places that are lacking, and then He tips us over to fill others empty places. With Him, we are enough. We are complete. We don’t have to compete to gain approval because He has already given it. We measure up. We’re good enough.

We are what He has called us to be. We are where He has placed us. I don’t know about you, but I don’t want to be anywhere else.

Before you go, check out our other posts