He wasn’t the strongest, he sure wasn’t the biggest. He had asthma, he was picked on, he couldn’t fight well and he didn’t fit in. Steve Rogers wasn’t most people’s first pick- or third. There wasn’t anything special about him, just a kid from Brooklyn- one that couldn’t make it into the army. Can you relate to that? That feeling of being passed over, of not being good enough.

Before Steve Rogers ever became Captain America, he was a person of integrity and character. He stood up for what was right, the weak, the bullied. He was a guy who couldn’t stand to be neutral or sit on the sidelines, even if that meant he was the one in the back alley getting beaten up.

What is integrity and why is being a person of integrity important to our walk with God? Integrity means: honest and having strong moral principles; moral uprightness.

I can’t help but think of David when I think of integrity. In 1 Samuel 16 we find Samuel on his way to anoint the new king of Israel, the Lord leads him to the home of Jessie. Jessie parades his first son before Samuel, and the Bible says that Samuel thought surely this was the one God had chosen but the Lord responded:

“Do not look on his appearance or on the height of his stature, because I have rejected him. For the Lord sees not as man sees: man looks on the outward appearance, but the Lord looks on the heart.” 1 Samuel 1:7 ESV

Jessie continues parading his sons in, and the Lord continues to reject them. As they come to the end of the procession I imagine Samuel was beginning to get frustrated. He was risking his life just being here, committing treason against his king- a man that he had anointed the king. And yet every time he thought he had the Lord’s pick nailed; he was wrong. Can you sense the desperation and frustration as in verse 11 Samuel asks “are these all of your sons?” (ESV)

David hadn’t even been invited to the party; he was still out in the fields tending his sheep. Being out in the fields away from his father’s house he may have even seen Samuel arrive, but no one thought to bring him in so that he could have his chance. He was passed over, forgotten, insignificant and unappreciated. When Jessie acknowledges his existence, he tries to disqualify him in the same breath “There remains yet the youngest, but behold, he is keeping the sheep.” (ESV) Can you see the similarities between these two? They both were passed over, they weren’t the first choice of even the second for that matter. Have you ever felt like them, like nothing you do will ever be enough? Do the same people that are supposed to believe in you, are the ones declaring you aren’t good enough?

Integrity is what lays the foundation for what God is going to do in our lives. Being a person of integrity while we are still out tending sheep, or still waiting to step into the position we’ve called to is what enables us to step into the role God has waiting for us. If we aren’t faithful in the dark where no one is watching, then we will stumble and fall when the light is on us and the world is watching. 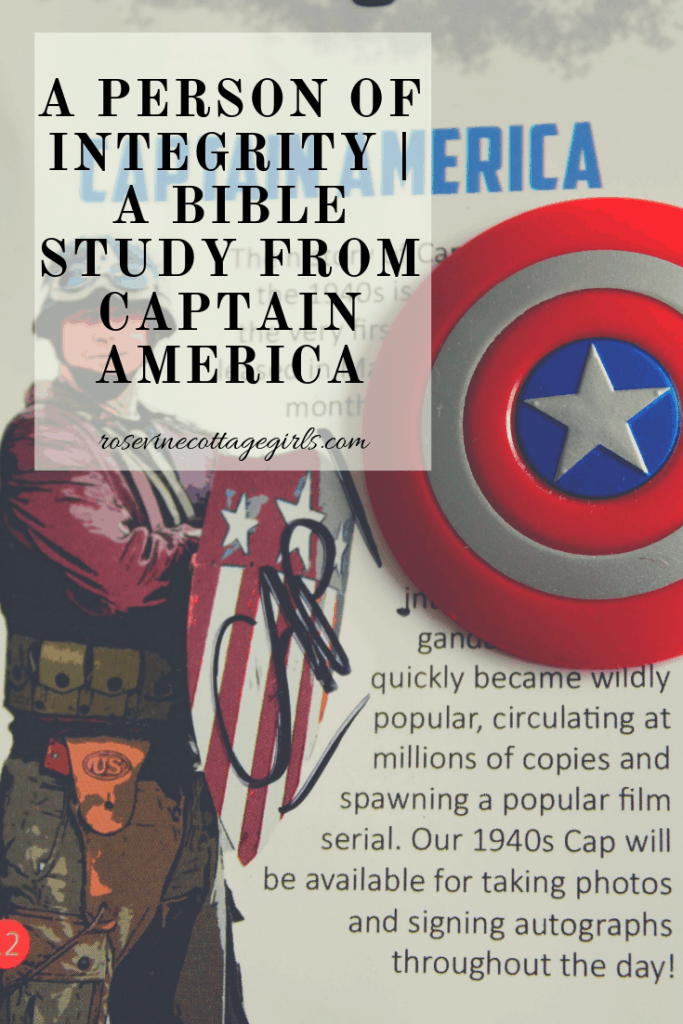 Steve Roger’s Had The Heart Of A Hero

Do you remember the part of the movie where Steve Rogers is talking to the doctor before they do the surgery? Steve asks why he chose him; the answer was so perfect. Roughly he told Steve that a man who is strong, and had power all his life can lose respect for that power. But someone who hasn’t been strong knows the value of strength and more than that they know compassion.

Steve Rogers was a person of integrity before he ever became Captain America, without it he never would have been able to become the character we know and love. He had the heart of a hero long before he carried a shield in the way he stood up for others, for his principles and what he believed in.

At the end of the day, he didn’t need to be strong, or big, because he was a person of integrity and had the heart of a hero. He had the courage and was willing to lay down his life for those same people who mocked him, without a second thought long before he ever became Captain America

You Must Be  A Person Of Integrity

This place of insignificance, where you feel like you aren’t enough is the very thing the Lord is using as a training ground to create in you a person of integrity. We must get it right here before we ever step onto the platform.

To have integrity means that we must do what is right even when no one acknowledges it, and it isn’t convenient for us. As Christians in a world where anything goes, it’s more important than ever to be a person of integrity. We must hold on to what the Bible says is true, even when it isn’t convenient.

“Scripture quotations are from the ESV® Bible (The Holy Bible, English Standard Version®), copyright © 2001 by Crossway Bibles, a publishing ministry of Good News Publishers. Used by
permission. All rights reserved.”

Before You Leave, Check Out These Other Articles