The Old Testament story of the Israelite’s in the Wilderness of Sin is a powerful reminder for us when life gets hard and we feel like giving up and walking away. There are so many lessons to be learned from this story, and so much to unpack that can impact us and help us to discover why we may be walking through the wilderness.

Why Did God Take The Israelites Through The Wilderness?

God knew that the Israelite’s were not prepared for battle, that spiritual and mentally they weren’t ready to face the challenges that would be ahead of them. So instead in God’s great wisdom, He led the Israelites through the wilderness toward the promised land.

What Is The Wilderness Of Sin In The Bible? 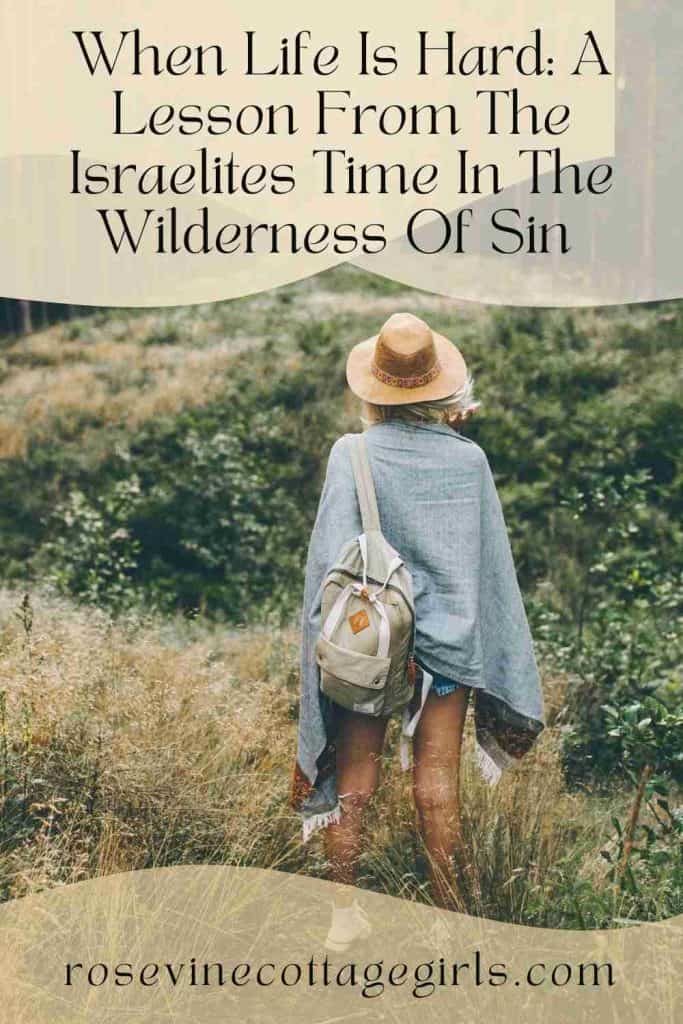 The wilderness of sin or desert of sin is a geographic location found in the Old Testament book of Exodus in the Bible. It’s somewhere between Elim and Mount Sinai.

What Does The Wilderness Represent In The Bible?

The Bible uses the ‘wilderness’ as a picture of desolation, or an uncultivated, barren place. It’s often a picture of going through a dry season or place both physically and spiritually. The wilderness is never an easy journey, it’s often a season of searching and discovering over and over again that God is with us when we feel alone. It can be a place of preparation like we see in the story of the Israelites in the Wilderness of sin.

What We Can Learn From The Wilderness Of Sin

I think sometimes God leads us into a dry season, through the wilderness of sin in our own lives because He needs to deal with something in us. He’s got to unearth some things we’ve allowed to take up residence in our hearts and dethrone Him so that He can prepare us for what lies ahead.

In Exodus 16 we’re told about a time when the Israelite’s were journeying toward the land they were promised and they came to a place called the “desert or wilderness of Sin”. They’ve been traveling for a while now, they are 15 days into the second month of this trip and the thrill is gone, they’ve become discontent.

It’s Easy To Forget In The Wilderness Of Sin

What they had prayed for in slavery is the very thing they are complaining about. They thought this was going to be easy- I mean they left Egypt with their arms filled with the riches of that nation, they left singing and dancing about how great God was, they watched the Red Sea pull back and stand at attention so they could pass through on dry land, they watched those same waters swallow their pursuers surely they were we’re going to hitch a ride in the fast lane. But that’s not what happened, it’s the fifteenth day into the second month of traveling and they want to be done. The “are we there yet?” stage has hit in this journey through the wilderness of sin, their feet hurt, they were tired, they were hungry and the Bible says that they rebelled against Moses.

What had started out as a great thing, has become detestable. They left Egypt arrayed for battle (Exodus 13:17-18) but instead of fighting, they found themselves off-roading through the desert and trekking through the wilderness of sin. What they wanted, didn’t turn out like they thought it would and so they began to complain. You see we want to follow God, we want to be where He called us, but we don’t always want to walk the path to that place.

God Needs To Deal With Stuff In The Wilderness Of Sin

The Israelites said “It would have been better if we had died in Egypt by the Lord’s hand, at least back there we had food to eat (Exodus 16:3), we were full back there- sure we lived in captivity but we were comfortable. Our feet didn’t hurt, we weren’t sunburned from hiking through this wilderness of sin. But you have brought us out here in the wilderness to kill us”.

Sometimes where God leads us is uncomfortable, it hurts, it’s not fun and we start to wonder, we start to doubt His plan- we know He has them, plans to prosper us and give us hope and a future (Jeremiah 29:11) but it feels like that “not to harm” part is missing. That seed starts to grow, and we grow discontent and what started out as dissatisfaction has blossomed into rebellion.

Anytime we rely on our perspective and our feelings to guide us and become our focus we are in trouble. The Israelites didn’t know that God brought them this way because they weren’t strong enough to face what was the other way, so as hard as the desert was what lay the other way was worse. When we allow our feelings to kick the Lord out of His rightful place and start relying on what we can see we forget that He sees the whole picture, we can only see a little itty bitty slice. He knew what would happen if He led us through the land of the Philistines and He knew we weren’t prepared for that and maybe God wanted to deal with some of the things that would come to the surface in their hearts as they walked through the wilderness of sin.

God Uses The Wilderness Of Sin To Teach

Last year my dad and I went on a hiking trip we started out at one waterfall, and then decided to hit another one while we were in the area. It was absolutely gorgeous, but what seems like a pretty easy hike going down can be much harder when it’s time to turn around. This particular waterfall was at the foot of this really steep hill, the only way to get down to it is down these really rough flights of stairs that zigzag down the side of the hill.

We made it down with no problem, but when it was time to head back to the car what had started out exciting turned into something to dread and we found ourselves climbing a ridiculous amount of stairs. Every time we thought we’d reached the top we’d look up to find another set before us. About halfway up I was ready to quit, my legs felt like jello, my feet hurt, I was tired, my water bottle was empty and I wasn’t having fun anymore. See what started out easy when we were driving turned out to be much harder than I thought it was going to be.

It’s easy to shake our heads at the Israelites in the wilderness of sin, but the truth is how many of us have done the same thing when life got hard? When the dream turned into work, the fun evaporated leaving behind endless drudgery as we tiredly trudge through the places that we had was dreamed about with fervor and passion.

The Wilderness Of Sin Is A Reminder When Life Is Hard

Maybe you find yourself asking much like the Israelites in the Wilderness of Sin “why did you let me come here? Why did you lead me to this when you knew it was going to feel like this?” Our legs ache, our feet have blisters but our destination is nowhere in sight and so we find ourselves saying “Why did you bring me here- why didn’t you leave me in bondage back there? Why didn’t you just kill me back there- at least I was comfortable?” and we try to run from the very thing that God is using to teach us.

Maybe God brings us out into the wasteland so that when that voice of doubt begins to speak in our hearts when our faith begins to waver beneath the heat He can deal with the root. He has to deal with the weak places in us so that when we do face the battle we don’t just look ready on the outside, but we are prepared on the inside to stand strong in faith.