It’s Sunday, the week before Palm Sunday and today we are going to the Mount of Olives! I simply cannot wait!!!

The Mount of Olives, Israel

It’s hard to keep the days straight as I have been so sleep-deprived, but it is getting better slowly but surely – Praise the Lord!

It’s Sunday, the week before Palm Sunday and we are going to the Mount of Olives! I can’t wait!!! 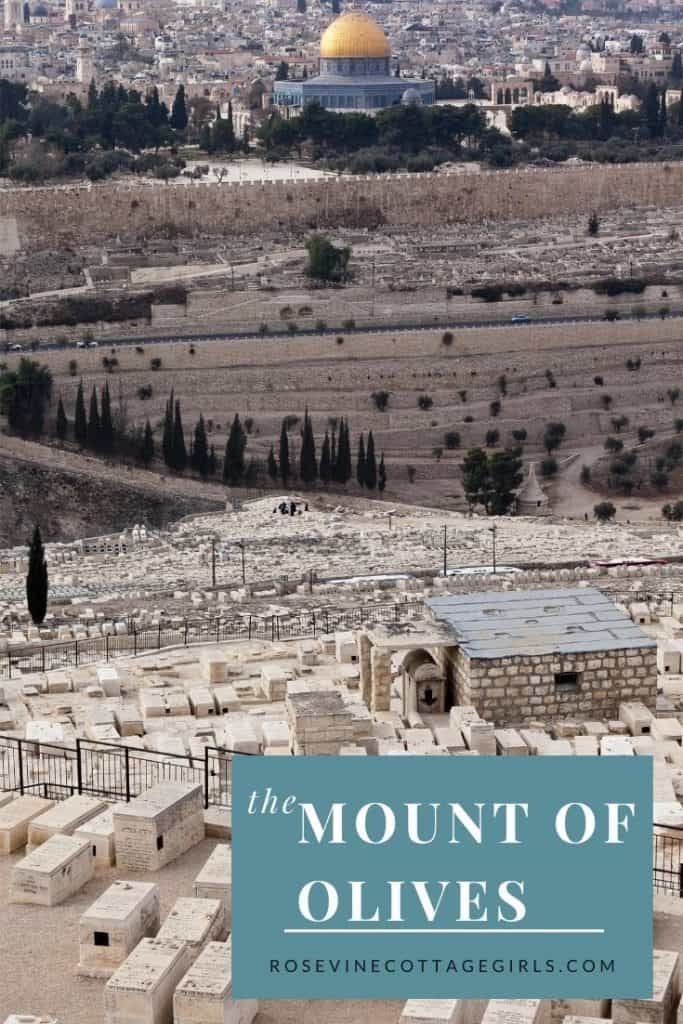 They call the Mount of Olives a mountain range, but it doesn’t look like a mountain range to me, more like foothills. At least compared to some of our mountains at home in California. I guess because everything is now so populated. Nevertheless, this mountain range divides and protects Jerusalem from the eastern deserts. (the way we traveled to the Dead Sea area).

As described in the “City of David” article from last week, this range starts in the North with Mt. Scopus. Mt Scopus derived its name when in 70 AD, the Romans, led by then General Titus, ‘scoped’ out Jerusalem before making the siege. The middle of the range is called Olives and this is where we are today. The southern part was the Hill of Scandal, rightly named as Solomon allowed his wives to build pagan temples and high places to worship foreign gods, expressly against God’s decree. I can’t imagine how disappointed the Lord was in him.

The Olives are not far from our hotel so it is a relatively short ride today, but rather nerve-racking. We are on very large buses driving on very narrow streets that are VERY full of cars! Our bus driver, Menachem, is a wizard with this monster and he drives like he is in a Volkswagon bug?. None of us can actually believe we have made it without scraping the paint or knocking off a bumper, but here we are. Thank you Menachem!

We have parked actually about half way down the Mount of Olives which is where the tourist’s area is located. Our guide, Eli, gives us a warning before exiting the bus. “I recommend leaving your valuables on the bus, they will be safe there but they won’t be with you. If you choose to take them with you, watch them carefully as there are very crafty pickpockets that you will encounter along the way. Please pay particular attention to street vendors selling large fold-out postcards. While unfolding them to show you the beautiful pictures, they will adeptly steal your valuables. It’s best not to enter into a conversation with them at all, just say no thank you and keep walking.” What a Shame it is.

It was just as he described and I guess like most large cities and tourist traps, you have to be careful. Just like when I went to Times Square N.Y, with my daughter-in-law, her mother, and my granddaughter. It’s still unfortunate.

So, Eric and I wound our way along carefully avoiding all of the vendors and sticking pretty close together.  Eric kept a watchful eye on our surroundings and we made it through without losing anything.  After going through the vendors, we gathered together on a patio of sorts looking down the hill, overlooking the graves we saw in the previous blog and down on the Valley of Kidron as it is known today and the Old City.

The day was cold and a little windy. It looked like rain. My rain poncho that I purchased from the Big 5 will come in use today – either to shield me from the rain or block the wind. Burr!

The Mount Of Olives In The bible

The Mount of Olives Jewish cemetery is the oldest (being some 3000 years old) and most important cemetery in Jerusalem it is from the time of King David until now.  The graves all face Jerusalem, the Holy City. Thousands of Visitors leave a stone on top in remembrance like they did in the old testament and they buried the dead while they were in the wilderness they would bury the dead there and cover the bodies with stones. When they would come across the grave they would place one more stone on top of the pile of stones. This cemetery has been used since the times of the bible and has over 300 ,000 burials.

Jesus would have been very familiar with this area. From the time He was a child throughout His adult life, He lived North of here by the Sea of Galilee, also known as the Sea of Tiberius. Nazareth is not too far from the Sea of Galilee which is where Jesus spent His youth. At least 3 times per year, the Israelites in the north, including Jesus and His family, would travel down through the Jordan Valley, up through Jericho singing songs of ascent and finally reaching the Mount of Olives or Olives. The three holy days were: Passover, Pentecost, and the Feast of Tabernacles. 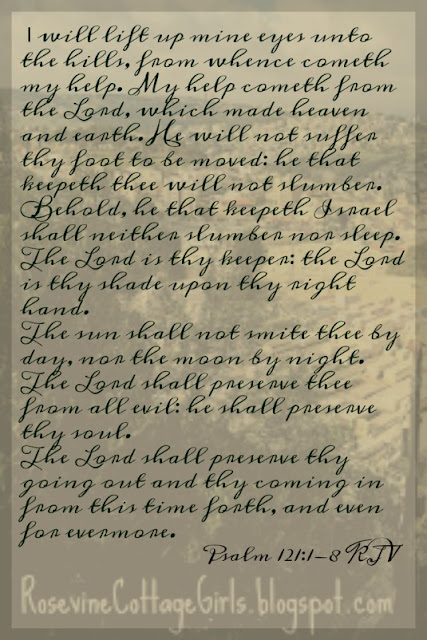 This mountain area, aptly got its name as it was covered in olive trees, both on and around. Olive trees were very important back then. I’m told not so much for eating olives as we do today. The oil is used for anointing, treatments for various wounds or illnesses, lamp oil, and, of course, cooking.

This journey would have taken days by foot at least. It took us a couple of hours driving on a highway to reach the northern area. When they finally did reach the Olives, they would have easily seen the Temple inside the old gates of the city.

Interestingly, they did not stay inside the city, but on the sides of the hills of the Olives. The Israelites’ pitched tents and set up camp on this mountainside and would stay there until the Holy days were passed and the sacrifices had been made. Jesus didn’t even stay inside the temple area when he was an adult nor during His ministry. He would go and teach and talk to the people, but then retreat to stay with Mary, Martha, and Lazarus in Bethpage/Bethany during the Holy season, then return to Galilee. Not until the night He was betrayed did He stay inside the gates.

From our vantage point, we can look down and see the current eastern gate of the Old City. This wall and gate were built about 480 years ago by the Muslim Turks. The walls and gates that Jesus looked down upon were buried beneath the walls we see today. The eastern gate is actually not even a gate at this time, it is sealed. It is told that the Muslims intentionally blocked, buried, and defiled the gates and soil to prevent the Messiah from entering upon His return.

In Lamentations 2:9, this was predicted” 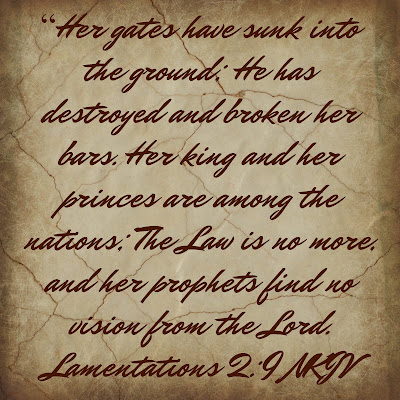 Of course, burying the gate will not stop Jesus from coming again. His return is clear and the gate will re-surface. I’ll explain more about this later.

The most poignant part of being in this very spot is knowing that Jesus entered the city from here on the donkey on Palm Sunday, also known as Passion Sunday, so many years ago. Jesus was being honored by a great multitude, as He made His way into the city great multitudes of people lined His path with palm branches, clothing. The people were shouting: 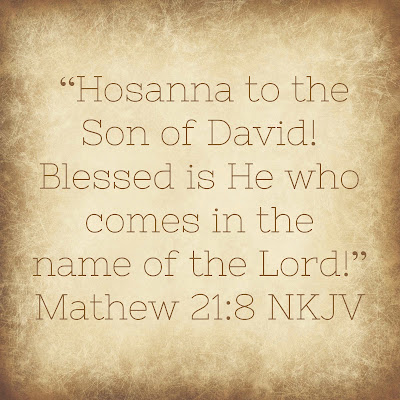 The people thought He was the king who would lead the people in victory from the Roman oppressors. However, Jesus was not celebrating. He looked down over the city of Jerusalem and wept! 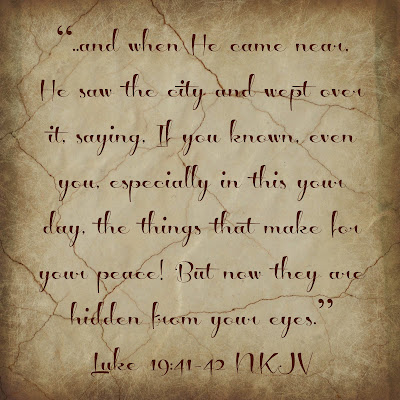 Our pastor told us that in Hebrew, the word wept does not mean a few tears. Wept, means shoulders heaving, crying! Sobbing.  How heartbreaking!  The Jews missed their visitation! If only they had understood their own scriptures!

The Prophet Daniel prophesied the exact date the Messiah, Jesus would ride into Jerusalem on a colt! See Daniel 9. It predicts that the Messiah would enter Jerusalem 73,800 days after the decree was given to rebuild the Temple by the Persians and in Zac 9:9 that He would come in riding on a donkey, a colt.

Standing there where Jesus rode, knowing that our Savior wept, with shoulders heaving, brought tears to many eyes, including my own. Jesus is looking to save all of us now! Don’t miss your visitation. 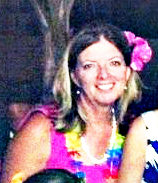 Debbie is a successful businesswoman and lives in Southern California with her husband Doug and her children and grandchildren.

Scripture is taken from the New King James Version Copyright @ 1979, 1980, 1982 by Thomas Nelson, Inc. Used by permission. All rights reserved.