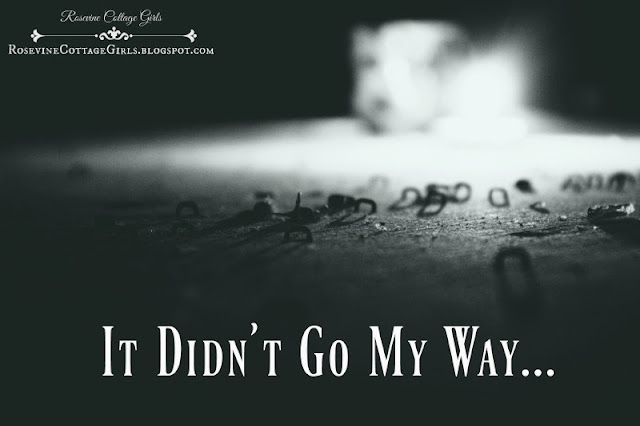 It didn’t go my way. How often I have felt like this, how often I have lain awake and whispered those words to the darkness. It Didn’t Go My Way. Why did it have to happen this way? Why?  WHY? How much like small children stuck in the why stage we must seem. “Why mom?”  “Why God?”

When Things Don’t Go My Way

Contents hide
1 When Things Don’t Go My Way
2 When Life Is Blessed
3 Job’s Life Falls Apart
4 When Job Is Knocked To His Knees
5 God Can Use It For Good
5.1 Before You Go, Check Out These Other Articles

For as long as I can remember Job has been my favorite book of the bible – it all started with a horse study and Job 39:19-25 (NIV).

“Do you give the horse its strength or clothe its neck with a flowing mane? Do you make it leap like a locust, striking terror with its proud snorting? It paws fiercely, rejoicing in its strength, and charges into the fray. It laughs at fear, afraid of nothing; it does not shy away from the sword. The quiver rattles against its side, along with the flashing spear and lance. In frenzied excitement it eats up the ground; it cannot stand still when the trumpet sounds. At the blast of the trumpet it snorts, ‘Aha!’ It catches the scent of battle from afar, the shout of commanders and the battle cry.

When Life Is Blessed

Poor Job, he was a man after God’s heart. He had been blessed richly, as he sought God in everything he did. The very text as we are introduced tells us he was blameless and upright. To say God was the center of his life is an understatement, this is what Job 1:5 says,

Early in the morning he would sacrifice a burnt offering for each of them, thinking, “Perhaps my children have sinned and cursed God in their hearts.” This was Job’s regular custom.

Then in a matter of mere moments, his life was forever turned upside down, he lost all of his worldly possessions- yet can you imagine his horror as his eyes fell on the final messenger? As the words left his mouth like the gavel in a judges hand, your children are dead. Before he’d only lost things, but now? Now the children he had raised, held their hands as they grew to adulthood, the ones he continually went to the throne room for we’re gone.

He lost everything in the time span of just a couple verses- with no apparent reason. Job hadn’t changed. He still served God faithfully and yet it didn’t go his way. Job never knew about the conversation in Job 1:6-11. His suffering was a mystery. He never heard the devil’s slander against him, he didn’t know that God was trying to prove his character.

When Job Is Knocked To His Knees

Many, myself included I fear would find ourselves crumpled on the floor our faith shattered into a million pieces shouting “Why God?” at the heavens. But not Job– Job fell to his knees in his grief and praised God. He didn’t know that through the centuries God would use his suffering, his heartache to encourage, and comfort.

God Can Use It For Good

God used his pain for good even though he may never have seen it, he’ll do the same for us. We may never know the “why”. But we do know that God He loves us and has our best at heart, sometimes that includes pain. His own son suffered and died a horrible death on the cross for us. So while we may not understand, we also can’t see the whole story. We don’t know how the next page will end much less the chapter, trust Him.

And we know that in all things God works for the good of those who love him, who have been called according to his purpose. Romans 8:28 (c) NIV

Before You Go, Check Out These Other Articles