The story of Moses holding his arms up during a battle may not be as well known as the parting of the red sea or the creation of the 10 commandments. However, it’s an incredible story of faith and obedience that we can all learn from. The truth is sometimes God’s directions don’t make sense to our small human minds. But God’s ways are not our ways, His thoughts are not our thoughts, and He can see the whole picture, instead of the tiny piece we get to see.

The Story Of Moses Holding His Arms Up

As the Lord led the Israelites out of Egypt in Exodus 13 the Bible explains why He led them through the desert. Despite the fact that they left arrayed for battle they were not prepared to face the battles which lay ahead so God takes them the long way around.

They’ve crossed the Red Sea, they’ve witnessed the Lord’s provision. They’re learning to step in tandem with God- but they are still complaining and falling back into that old way of thinking, of asking God why He brought them out into the wilderness to kill them so when we reach Exodus 17 we are taken by surprise with what we read.

At the beginning of this chapter, the Israelites are echoing the same complaints, the same worries from the last time things got a little uncomfortable. They’ve seen over and over again that the Lord will provide, and yet they still doubt. We find the people in the midst of another tantrum session, whining and worrying that He won’t come through with the water they need. Sure, He came through last time, but what about this time seems to be a theme throughout this forty-year trek of the bible. 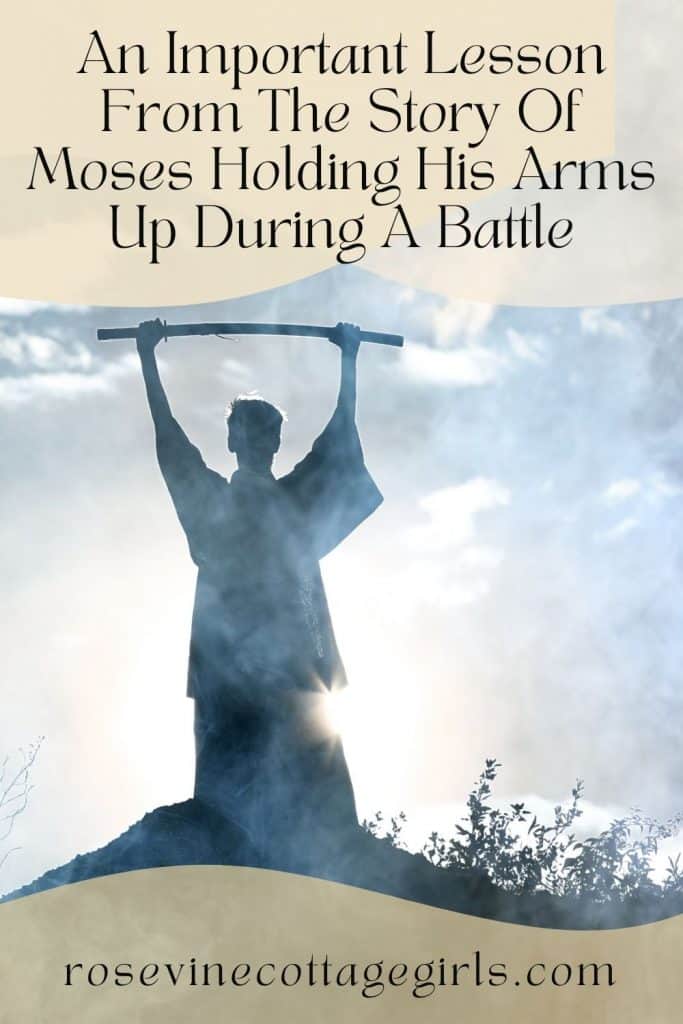 As we continue to read [spoiler He came through] we find that the Israelites now face the very thing they went off-roading to avoid, battle. I am going, to be honest, I have to wonder what makes them any more prepared? They’re still doubting, still messing up, still questioning God’s grace, surely it would be better to go around.

How God Uses Moses Holding His Arms Up

What makes them qualified to face battle now, that they didn’t have at the beginning of this trip? I didn’t read about any boot camp or basic training – in fact, Moses was just asking the people why they were putting their God to the test, these people sound anything but battle-ready. So what changed? Was it maybe the blisters?

The provision they’d held in their own hands and seen with their own eyes. Perhaps they needed the lessons they’d learned on the way to this spot to prepare them for this fight. To compound that the answer doesn’t always look like we thought it would. They needed some experience under their belts so they’d be ready for battle – there’s no water but He’s our Provider. There’s no food, but He’s my Life-Giver. It’s not what I expected, it’s not as easy as I thought it was going to be, but He is my Sustainer who will see me through.

They’ve come as far as they can, and now they’ve got to deal with some things- in their case, it’s the Amalekites, it’s a physical army, it’s something they can see. But I bet there are some of us who need to deal with some things too, maybe it’s not something we physically need to attack but maybe it’s something emotionally or spiritually. Maybe it’s been ravaging your family for generations and here is where it needs to be laid to rest. Here is where the battle needs to be waged because we can’t go forward, we can’t move into our promised lands until we fight this battle. But we’ve been running, we’ve got the armor, we’ve seen His provision but we doubt our ability to win the battle.

The Lesson Of Moses Holding His Arms Up

We’re afraid that it will be too hard to beat, and deep down you know He is with you, but all you can see is the enemy. All you can see is the issue, the thing that needs to be vanquished and it feels so big. We know God’s right there with us, we know He has lead us to this place – you’ve seen the pillar of cloud and the pillar of fire – but you still can’t see the way out.

I can’t help but wonder what Joshua was thinking as Moses tells him to take some men and go out to fight while Moses holds his arms up with a staff. Hold on let me get this straight, I’m going into battle while you stand on that hill holding a stick above your head… right. That’s showing them, Moses, I think you’ve been in the sun a little too long. The desert is getting to you.

Moses doesn’t tell Joshua what the result will be, he also doesn’t explain why he is going to do this, he just tells Joshua to go. The Bible doesn’t record a response, only that the next morning he goes out with the men he selected to fight. He doesn’t have the whole picture, but he goes anyway. Moses heads up to the hill, and it still doesn’t make sense.

Moses holds his arms up, lifting his staff into the air and the Israelites begin to win the battle, it doesn’t look like what they thought it was going to- they witnessed the Red Sea swallowing the last enemy they faced but this time it’s different. This time they have a more proactive role, this time they are fighting.

What We Can Learn From Moses Holding His Arms Up

Maybe it’s something has torn through your family for generations. This is where the lesson of Moses holding his arms up in faith and Joshua’s obedience comes home. It’s here that we have to walk these lessons out. We don’t have to understand it. We don’t have to see how He’s going to work out, we just have to keep the faith and be obedient when He directs us.

He’s brought you to this place so you can pick up your sword, and look the thing holding us in bondage in the eye and say I have carried you out of captivity with me, and I have carried you across this wasteland but I am not taking you one more step. You have no place in the promised land on the other side of this season. I may not be able to see the way, and I may not feel prepared but I read the back of the book and I know the victory is mine.

The Importance Of The Story Of Moses Holding His Arms Up

I think this is what makes verse 14 stand out so much in this story of Moses holding his arms up. The Lord tells Moses to write down what happened so that it would be remembered. But then He tells Moses to make sure Joshua hears about it, Joshua was there he had a first-hand experience of what transpired, and yet God wants Moses to make sure that he hears. Joshua had witnessed the battle in the front row seat, so why is it necessary to make sure he knows, isn’t that a bit obvious? “Hey Joshua, you won!”

Could it be that Joshua was too close, that in the story of Moses holding his arms up, he was so busy fighting that he couldn’t understand why? Perhaps Joshua was reacting to the situation,  he’s in the moment and because of that he couldn’t see what God was doing. Where Moses holding his arms up on that hillside with his staff raised above his head, and his friends supporting his arms had a more distant view, and could see God’s hand at work better.

Might it be that we get so caught up in fighting the battles we are facing that we miss what God’s done? Much like this story of Moses holding his arms up, we know we’ve been sent to fight this battle but it’s hard to see God’s hand in it. Even though we don’t understand, even when we can’t see Him, He has never left our side, in the thick of the battle He’s still providing, still meeting every need, the answer just doesn’t always look like we thought it would.

So the Lord tells Moses to make sure that Joshua knows, tell him I was at work, and not only did I give you the victory over this battle but I am blotting out the name of who you just fought. I didn’t just promise you the battle, I am giving you the war. I didn’t just make you the overcomer, I made you the victor. That thing you’ve been wrestling with I already crushed it and I didn’t it in a way you never expected

Before you go check these out!