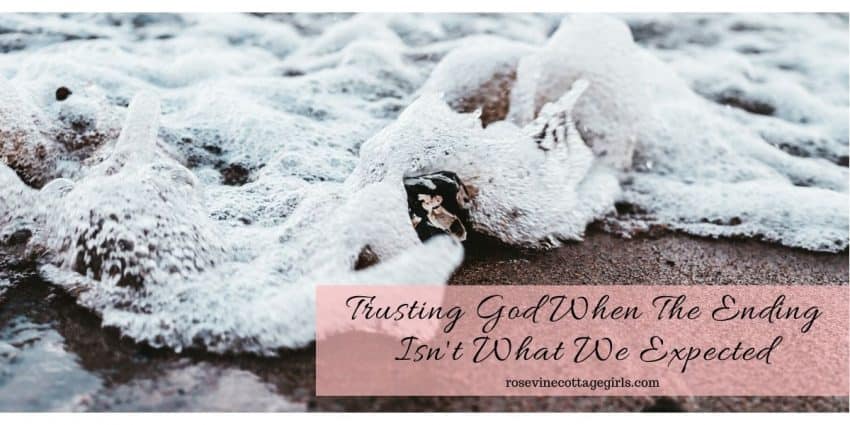 In the darkness of Good Friday, it’s hard to keep trusting God and let Him work out what is standing in our way. It’s easy to ask why God has abandoned us -in the wake of broken dreams nailed to a tree, in the face of tragedy that struck out of nowhere in the breathtaking triumph of evil that leaves us speechless- as a hammer prepares to strike a nail that will pierce the Savior. The story of the birth of Christ that we just celebrated a few months back comes to a crushing, agonizing stop.

The savior of the world is hung on a cross. To the disciples and even us if we had been there it would seem it was all over. No way around it, no way through it, this is it. The story that had started with a baby in a manger ends with a man upon a tree. Victory turns into defeat and doubt creeps in to shake everything that we believe. How do we keep trusting God in these moments where life just doesn’t make sense. 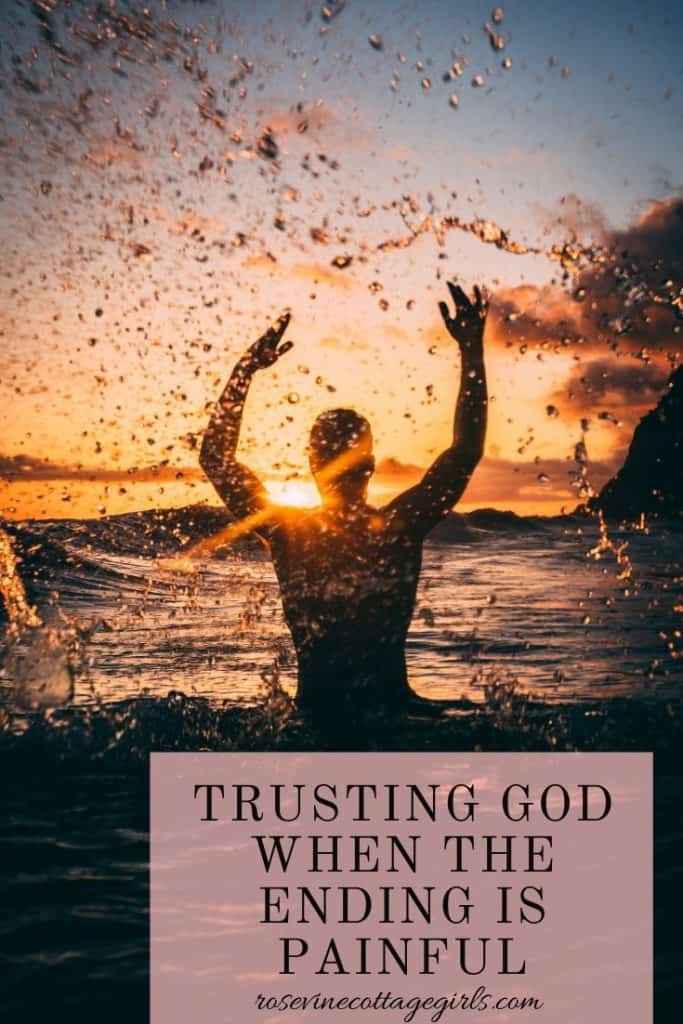 Trusting God When Good Friday Looks Like The End

We know the end of the story- but His disciples didn’t have the luxury of reading it as we do, they had to live it and when you are in the moment, you can know all the right answers and still be battered by the storm you didn’t expect. You can still have the wind knocked from your lungs, at the finality of the ending. Friendships stripped away, family members ripped from your arms, dreams shattered and left in a place of death and destruction, an unexpected ending. You find yourself desperately trying to cling to your faith as doubt screams louder in your ears.

We can’t see around the bend, we can’t see the light of Sunday while we are walking through the darkness of Friday and Saturday. All they could see is their savior, the one they had waited for, their hope, their dream that had come to pass nailed to a cross. This was the end as far as they could see.

We’ve all been here, wandering in the darkness, of our own personal Friday’ when the pain is just too much, the disappointment too overwhelming and we find ourselves saying it can’t end like this... Why God?… Tell me why have you forsaken me? Why did you let it end here? It’s easy in these moments to forget that Sunday has already been promised.

We don’t serve a God that is confined by endings- even the ones we didn’t see coming. No matter how dark it gets, no matter how much evil gloats at the win, Sunday is on its way. It will not end like this, because the ending is written in stone. This is merely the end of a chapter, and sometimes God uses what we see as an ending to leave a bigger impact then we could have ever imagined.

Trusting God In The Storm

Where there is even a shred of light the darkness is shattered. It may look like it is over, it may look like your hope is dead. The people closest to you, the people that we’re supposed to love you have hurt you the most. The betrayal of a parent, the reveal of the true character in someone you thought you knew. The broken place that you just can’t fix, you’ve been trying so hard to follow Him, the best you knew how. But now you find yourself in an unfamiliar place and what you thought was going to happen didn’t happen. The mission you abandoned the safety of the boat for has ended on the cross while “It is finished” echoes in your ears and you can’t help but wonder if you were wrong.

We like to skip to the Joy of Easter and the resurrection.  To skip to the triumph and avoid the darkness. The time before the pain and the disappointments of the dead places. The places where we find ourselves not as lost children restored at the foot of the cross, but followers disappointed because our dream ended here. Everything we thought we knew, withers in this dead place and there’s nothing we can do. Our faith begins to crack and all those things we thought we conquered comes creeping back.

Trusting God Through The Pain

As we read through the crucifixion of Jesus in Mark 15 and slip into chapter 16 we find the women who followed Jesus on their way to anoint His body- they don’t know He’s risen, as far as they know their hope, their dream died on that cross. But here they are, returning to the place in which it was laid to rest. I don’t know about you, but I don’t think I could have done that. I don’t think I could have come back to the place where everything ended. Where nothing but disappointment and heartache grows. Could you go back and face the stone-cold face of truth?

When we are disappointed, it’s easy to throw in the towel and walk away, to hide like the disciples. The truth is we’re angry, and hurt that God would let it end like this. Like the little boy in the Princess Bride, we want to interrupt shouting “Hold it! You read that wrong!” it can’t end like this. So I find the faith of these women remarkable.

They witnessed the same thing as the disciples and yet here they are returning to the grave, they don’t wait for the others, they don’t wait to be directed, they just go, even though they know that there is a stone that they can’t move on their own- and they didn’t bring help. It is hopeless, many would say pointless, but they go anyway. How many of us need to follow in these lady’s footsteps and go anyway? God brought us to this place, and it hasn’t turned out as we thought it would. We’re dealing with the pain and disappointment, tired of fighting the same battles over and over again, and the last thing we want to do is go back and face it. But we need to.

We don’t understand it, we don’t see the way, but we’re going anyway… I think sometimes that’s all God wants- for us to show up anyway. Even when it’s hard. When all we see is the darkness. Even when it looks like it ended in death and disappointment. Even when we have to fight the same battle we’ve been fighting for the last year. Even when we can’t move the stone that sits in the way, show up.

Trusting God To Work Out The Ending

The same cross that represents death in chapter 15, now bridges the gap into chapter 16 where the stone is rolled away. God is already working out what you are worried about. We may not be able to see Him, and the world around us may feel so dark, it may look like it has ended on the cross- but the Lord is at work in the darkness and the cross has no power because the stone is about to roll away. Even if it looks like it’s ended on the cross, it can’t stay there.

Friday- with all of the disappointments, and pain and failure is the hinge on which the doors of God’s grace will swing wide open. It can’t end in the dead place, the end of the book is already written. Evil may win the battle, but it’s already lost the war. The victory has already been claimed and He can take every mistake, every broken piece and turn it into a miracle.

Keep walking despite the stone

Often we see the stone in front of us, and we know we can’t move it so we walk away- He won’t leave it on the cross, or in the grave, but often we do. In our panic to avoid the pain and disappointments, in the fear that we may end up in uncomfortable places, that He may lead us to a place we don’t want to go, that it might end up on the cross we hide and allow the story to die here instead of returning like these women.

The devil can try to destroy what God is doing. He can attack it, he can bury it, he can even try to kill it. Satan will bring people into your life to try to tear down what you’ve been building.  People to speak death over the dream the Lord gave you. He can try to send people to discourage you. He’ll pull out all the stops to send you retreating away from the place God has called you to. You will see where he’ll try to make you believe that this is where it all ends. Make you think that there is no way out of this dead place- but He can’t stop what the Lord is doing. Keep walking, keep trusting God and let Him move the stones that are standing in your way.