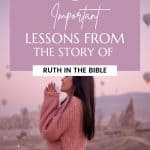 Ruth in the Bible for many is a well-known and beloved Bible story, but when was the last time you dug in deep and really discovered this Bible character? Let’s take a deeper look at this story we know so well, and glean the lessons to be learned.

The Story Of Ruth In The Bible

The story of Ruth in the Bible is a beautiful story of redemption, and often the casual reader will miss the picture of Christ redeeming us nestled in these Old Testament pages.

Who was Ruth in the Bible?

Before we go any further into the story of Ruth in the Bible let’s take a look at just who this woman from scripture was, and flesh out her story a little more. For most of us, we may be familiar with some of her background or at least her story while other bits of Ruth’s story may be new to us. Let’s set the stage:

Naomi and Ruth In The Bible

Much of the beginning of the book of Ruth revolves around Naomi, her husband, and her two sons left Bethlehem because of a famine. It isn’t until they have resettled in Moab that we are introduced to Ruth and her sister-in-law Orpah. We are quickly thrust into the story and find that suddenly Ruth’s husband, father-in-law, and brother-in-law have all passed away.

Then she kissed them goodbye and they wept aloud and said to her, “We will go back with you to your people.” But Naomi said, “Return home, my daughters. Why would you come with me? Am I going to have any more sons, who could become your husbands? Return home, my daughters; I am too old to have another husband. Even if I thought there was still hope for me—even if I had a husband tonight and then gave birth to sons— would you wait until they grew up? Would you remain unmarried for them? No, my daughters. It is more bitter for me than for you, because the Lord’s hand has turned against me!”

We find Naomi reeling from the loss, and she decides to return to her homeland Judah where her friends and relatives are. This leaves Ruth with a decision to make, stay with the woman she has come to love so dearly and abandon everything she has known. Or stay in her comfort zone and abandon Naomi to return to her own land alone.

At this they wept aloud again. Then Orpah kissed her mother-in-law goodbye, but Ruth clung to her. “Look,” said Naomi, “your sister-in-law is going back to her people and her gods. Go back with her.” Ruth 1:14-15

I can’t help by wonder why Naomi would try to send them back -back into a culture of death, and idolatry. Could it have been pride? The fear that those at home would know what had happened in Moab when she came into town with this woman who couldn’t even worship with her. That they had left and gone to a place they were never supposed to be, and her sons had married outside of their faith and to the very people oppressing them.

So when it was time to go home, she didn’t want to bring Moab with her. She didn’t want them to see where she had failed. Could it have been that Ruth was a reminder of Naomi’s drifting and disobedience?

Why Did Ruth Stay With Naomi?

Ruth in the Bible loved Naomi dearly, and she had great compassion for the woman who had lost her husband and only sons, only to find herself alone in a strange land. But she also had come to know and love Naomi’s God. And so in her famous declaration, Ruth tells her mother-in-law:

But Ruth replied, “Don’t urge me to leave you or to turn back from you. Where you go I will go, and where you stay I will stay. Your people will be my people and your God my God. Where you die I will die, and there I will be buried. May the Lord deal with me, be it ever so severely, if even death separates you and me.” When Naomi realized that Ruth was determined to go with her, she stopped urging her.

Ruth chose to leave the only home she had ever known, her family, and her friends, and make the journey to an unknown place with Naomi. We can only imagine the fears that must have invaded her thoughts.

But she bravely chose Naomi, and Naomi’s God, and like Rahab (the mother of the man who will be her second husband) before her, we find Ruth woven into the tapestry of the Old Testament in God’s perfect plan.

She could have chosen to stay, like Orpah to return to the gods of her people, turn her back on the one true God she’d been introduced to by Naomi’s family- but instead, she chose the unknown. Where you go, I will go. Your people will be my people. And your God my God.

What Ruth in the Bible and Naomi miss is that through their story God was bringing Lot’s descendants back into the fold where there had only been division and writing His story of redemption through them.

God took Naomi and Elimelek’s disobedience and redeemed it in a supernatural way by bringing Ruth back to Bethlehem where she will meet Boaz.

Little did Ruth in the Bible know that God was drawing her back to Bethlehem with her mother-in-law for a purpose. She had no idea that she was an integral part of God’s plan of redemption.

Boaz enters the story as a kinsman redemer. Boaz owned the land where Ruth came to find grain after she and Naomi return to Bethlehem. He knew of her situation and told his workers to leave plenty of grain -a custom in Isreal to care for widows- for her to find.

Boaz also offered her food with the other workers and encouraged her to work in the safety of his fields throughout the harvest.

Naomi knew that Boaz was a close relative who, according to Jewish law, had the right to marry Ruth after the death of her husband. Naomi encouraged Ruth to go to Boaz in the evening and present herself as willing to accept a marriage proposal from him. When she did, he was pleased, but there was one relative who was closer in line to marry Ruth.

Ruth and Boaz Son: Boaz and Ruth in the Bible were married and soon had a son named Obed. Naomi’s sorrow and bitterness turned to joy as she became a grandmother.

Who is Ruth to Jesus? Ruth’s son Obed would later become the grandfather of King David, who would also serve as an ancestor of Jesus Christ.

12 Meaningful Lessons From Ruth In The Bible

There is so much to glean from the story of Ruth in the Bible, it’s a picture of loyalty, redemption, mercy and so many other things. Let’s take a look at 12 lessons from Ruth’s story.

Ruth In The Bible Teaches Us Loyalty

Ruth is a stellar example of loyalty, both to the people we love and our God. The story of Ruth in the Bible is a shining example of how to love others, and follow bravely where our God leads.

The book of Ruth in the Bible is yet another reminder that no one is outside of God’s reach. No history is too dark, no life too messy, no mistake too big that we can’t fall into His waiting arms and let Him use it all for His glory.

The Story Of Ruth Shows Us God’s Plan Transcends Generations

The Redemption story that began in the story of Ruth, did not end there. Instead, we find it woven into story after story of the Old Testament and then brought to perfect completion in the New Testament where it impacts us right here in our own homes.

Ruth In The Bible Reminds Us To Look For The Supernatural

Ruth in the Bible reminds us to look for His fingerprints in every situation, and see how He is working it all for His glory and purpose.

If you take away one thing from the story of Ruth in the Bible, let it be that no mistake or failure is too big for God’s grace to cover.

It’s so easy to let life’s hardships drive us away from God when these are the very moments we should be running to Him all the faster. The truth is that life is hard and we can’t do it on our own, but we have a Heavenly Father ready and willing to walk through it with us and carry our burdens.

Ruth In The Bible Reminds Us That God Is Faithful

Ruth Shows Us That God Can and Does Use Everyone

Once again Ruth’s story -as with so many others- shows that God can use everyone, and if we will trust Him and be obedient He will use us for mighty things.

Ruth Shows Us that Decisions Made Today Impact Generations

The book of Ruth in the Bible is a wonderful reminder that our decisions today, have the potential to impact generations. Ronald Regan once said that freedom is never more than one generation away from extinction- the same is true for our faith.

Ruth’s Life Shows Us That God Uses The Little Things

Ruth’s story shows us that God uses the little things, and we need to be faithful in those things we think are insignificant.

Ruth In The Bible Reminds Us To Have Faith

Ruth in the Bible reminds us that the past is not our present, just like Ruth we have a redeemer. One who loved us so much He stepped down from His thrown to bridge the void that our past could never let us cross. And to fill the God-sized cavern in our hearts. Our past is not our future, and our future rests in His capable hands.

The Book Of Ruth In The Bible

The story of Ruth in the Bible is a beautiful reminder that no mistake we’ve made, or our family has made is too big for our God. No mess is too ugly for Him. No story is too tangled or tarnished that His grace can’t cover.

If He can weave a story of redemption out of a woman descended from an incestuous relationship that culturally was forever separated from God, and a man who was the son of a Jerico prostitute and one day in the same city generations later Jesus would be born of their line.

So that you and I could finally come home from our own Moabs. Ruth’s story transcends her era, and leads us directly to the birth of our savior, and finally to the cross that would bridge the gap for us.