Marburg Germany and the Marburg Castle or the “Marburger Schloss”

Marburg is an ancient university town.  The town is magical with its cobblestone streets and amazing architecture that is something out of novels. We walked to the train station from our hotel while it was still dark and got on the train.  It was not long before we pulled into the Marburg station.  It was early still so there was not much open yet. We walked up the ancient cobblestone roads up toward the center of town. The sky was still darkened as we looked up to the hills we saw in the distance a castle. It was the Marburger Schloss or Marburg Castle and boy was she a sight to see. 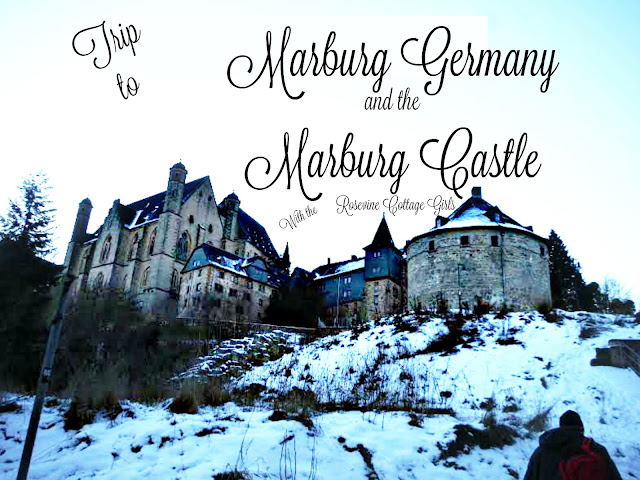 The schloss or castle was built in the 11th century as a fort, it became the first residence of landgravate of Hesse.  The place is amazing to visit.  If you joined us for our tour of St. Elizabeth’s church we talked about Elizabeth’s life and the life of her husband the landgrave.
This was where they lived and then his brother was the new landgrave when he died. Their daughter Sophie of Brabant was successful of winning the Landgraviate of Hessen for her son Henry and it was connected to Thuringia along with Kassel (we will go there soon) from that time until 1540. 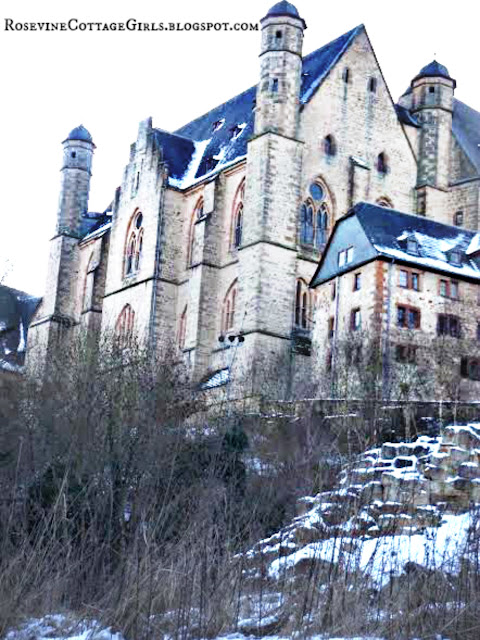 We headed in that direction not knowing how exactly to get there.  The town is settled on the slope of a mountain and situated on the banks of the river Lahn.  Walking the streets there reminded me of my time in San Francisco, California while I was in the Navy as we were walking because of the slope of the hill.  It seemed every road was straight up.
Sitting along the road we were walking along we were treated with beautiful old homes along the way.  It was cold, in the 20 degrees F. area so we were all bundled up in our heavy coats, hats and snow boots.

We were searching for a pathway up to the castle.  We found two ways up, one to our right up a road and another possibility was to the left of us on a path that led from a parking lot up a hill toward the castle.  Someone in our group decided that the straight road up was the best and shortest (note: I must say at this point that this was not my decision). 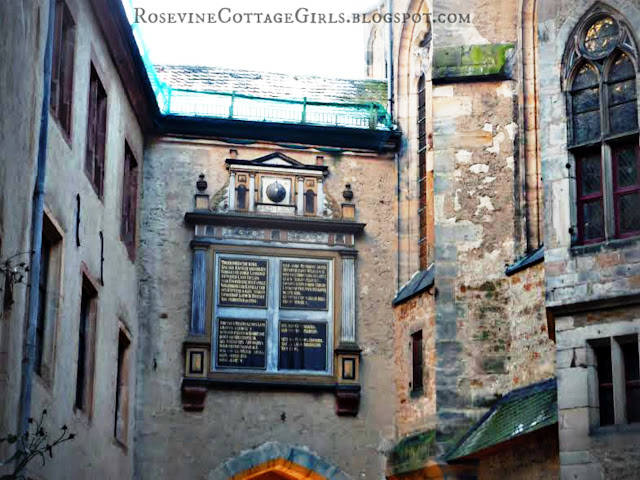 We took lots of photographs as we journeyed up the hill.  The pathway led to steps and a trail that led to what I am assuming was the fortification wall or the moat’s wall and a dead end. Since none of us were prepared to storm the castle and climb the wall we retreated back down the pathway from where we came. When we reached the bottom we found a gentleman that was walking his dog and he happened to speak English (which was very good for us since our German is sadly ineffective for more that finding a bathroom and maybe finding food). 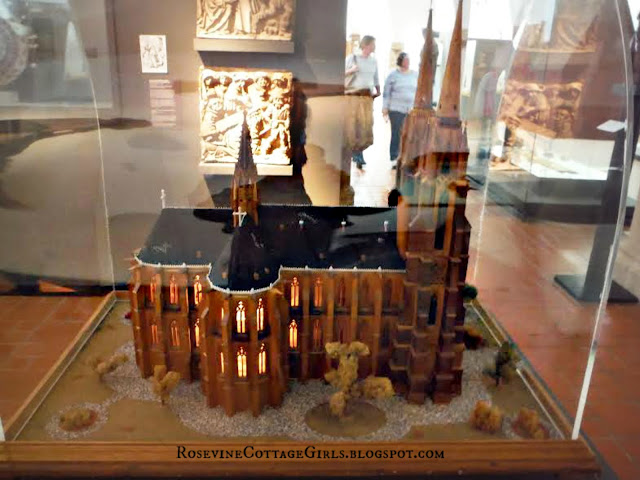 He told us to take the road to the left and then to take the first left to follow it to the top and then the castle entrance will also be on the left. We headed up the road that wound steeply up the hill and brought us along the back side of the castle. There were so many large beautiful houses that were very old but I don’t think they were as old as the castle.

The castle was bigger than I expected it to be. The walls are all intact, and only some of the moat was there. Marburg was the center of the uprising in 1806 and again in 1810 against French and so the castle fortifications were partially destroyed then.
We took 20 minutes walking around the castle taking all kinds of photographs.  We stood and watched the sun rise up over this amazing town and it took your breath away.  I was able to take some shots of the sunrise behind the steeple of a second church down below us. It was so beautiful. 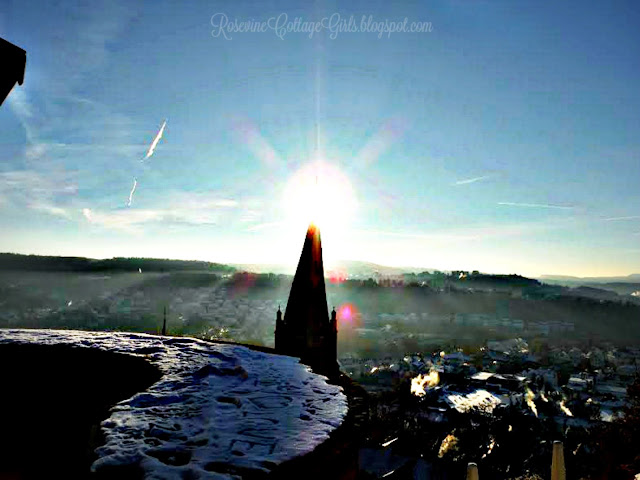 While we were waiting for the castle to open we found a sign for tours around the city that started at 9:45 AM and since the castle opened at ten and the bus would drop us back off at the castle, we thought that we should take the tour and then later come back and tour the castle. We waited and waited and waited way past 10 AM and realized the bus was not going to come so we headed back over to the castle 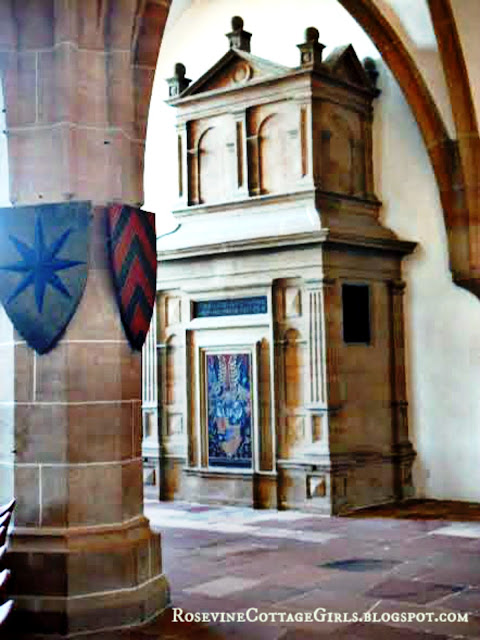 We went up and paid our 5 euros to tour the castle. You had to enter an elevator to begin and I went into the back and leaned against the rail along the back wall of the elevator.  When it came to a stop I started to exit the elevator and there was a huge crash behind me. We all jumped a foot and spun around. I guess the screw came out of the rail and it fell off.  We about had a heart attack and left the elevator quickly but got a good laugh about it when we knew we were ok and the elevator was not going to go careening down on us. 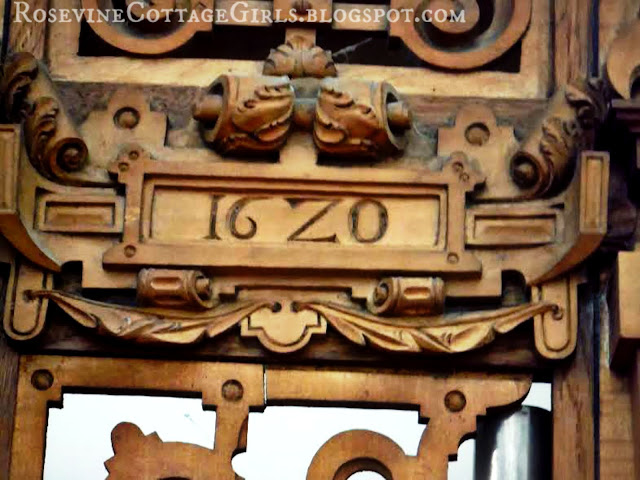 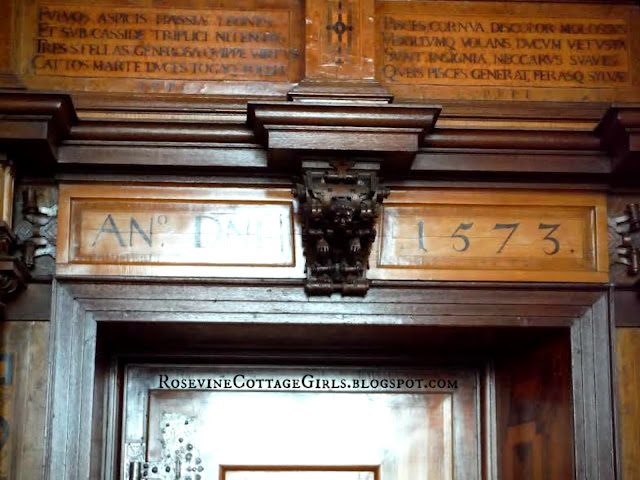 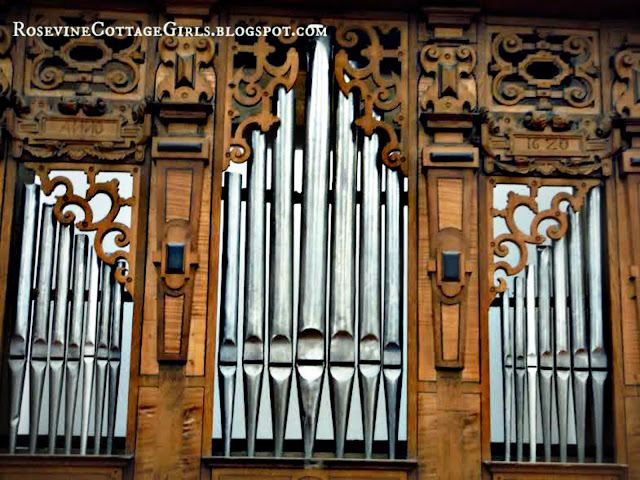 We found out that the castle was one as I said before of the landgraves but later served as a prison and is now the archives. 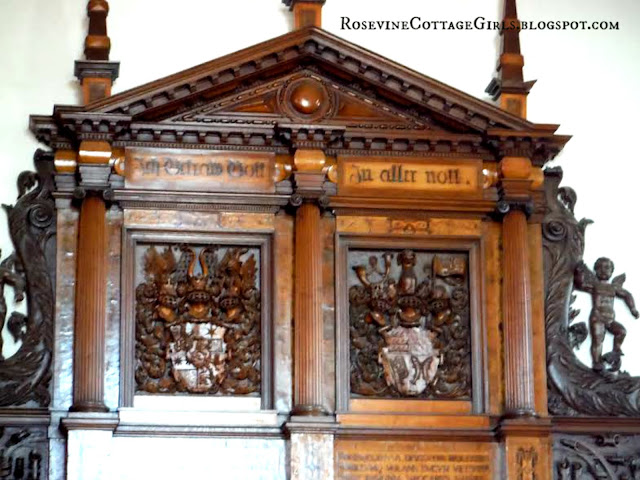 Several hours later, when we finished our tour we took another route down from the castle grounds which had stairs all the way back down the hill.  About half way down the stairs we found another ancient church and we just had to stop and tour that church as well.  That I will cover in my next post. Check out the video of the rest of the museum.

See you next week for another adventure!