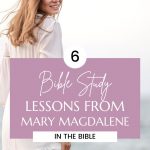 Mary Magdalene is a character we find in the New Testament and while her name is well known, her story tends not to be known as well. But there is so much to learn from the story of Mary Magdalene in the Bible that can impact our lives. Mary Magdalene’s Story teaches us:

Mary Magdalene In The Bible

We find Mary Magdalene mentioned throughout the gospels in varying degrees, Luke 8 is one such place:

After this, Jesus traveled about from one town and village to another, proclaiming the good news of the kingdom of God. The Twelve were with him, and also some women who had been cured of evil spirits and diseases: Mary (called Magdalene) from whom seven demons had come out;  Joanna the wife of Chuza, the manager of Herod’s household; Susanna; and many others. These women were helping to support them out of their own means.

Who Is Mary Magdalene? According to this passage,, Mary Magdelene was a woman whom Jesus cast out 7 demons from. Digging further into her story, we can assume from her name (Magdalene) that she most likely came from a place called Magdala, which was a city on the southwest coast of the Sea of Galilee. Magdala was known for its prostitution.

Mary Magdalene is also often linked to the woman whom Jesus saved from stoning after she had been taken in adultery (John 8:1-11). However, there is no evidence that this is true either. So again we must assume that these are two different women.

What happened to Mary Magdalene after the resurrection?

All four gospels confirm the presence of Mary Magdalene at the crucifixion, and then burial of Jesus. We can only imagine what it must have been like to come from her background, to be so radically changed by Him, and then watch His crucifixion.

We can only imagine the pain she was going through, did she have doubts? And yet we don’t see her run away, going back to her old life as some sort of coping mechanism. In fact, while the disciples are still hiding out in the upper room we find her returning to the tomb.

Mary Magdalene’s desire to be near her savior and her desire to serve Him became her way of life, and so it is only natural that we find her here at the tomb. Where others fear to tread she comes, in the face of such exquisite heartache- her hope laying buried inside those rock walls.

Where others mourned, she returned to the reminder set in stone. She was no stranger to hopelessness, and maybe it was the knowledge of what He saved her from that drew her back.

Now when he rose early on the first day of the week, he appeared first to Mary Magdalene, from whom he had cast out seven demons. Mark 16:9

Her need to serve the one who had saved her draws her back to this place of death in the early dawn hours, and so here we find her. Making her way in the still dawn hours, as the sun slowly crept into the sky banishing the darkness and casting new hope over the landscape.

We can only imagine how she’s feeling, the tears still burning their way down her cheeks, the rawness in her throat that only anguish can bring. The brokenness in her spirit as each step brought her nearer, and yet here she and the other woman are doing what no one else would. Returning to the tomb when all hope is lost and serving her Lord.

Can you imagine the shock? As they came upon the tomb and saw the stone rolled back. The confusion must have swept over her and her companions as they realized Jesus’s body was gone. The fear, and horror as they think someone has come and taken the body. The panic as she runs to tell the disciples.

Now Mary stood outside the tomb crying. As she wept, she bent over to look into the tomb and saw two angels in white, seated where Jesus’ body had been, one at the head and the other at the foot. They asked her, “Woman, why are you crying?” “They have taken my Lord away,” she said, “and I don’t know where they have put him.” At this, she turned around and saw Jesus standing there, but she did not realize that it was Jesus. He asked her, “Woman, why are you crying? Who is it you are looking for?” Thinking he was the gardener, she said, “Sir, if you have carried him away, tell me where you have put him, and I will get him.” Jesus said to her, “Mary.”

Her love of Jesus brought her back to the tomb, and she was faithful even after His crucifixion- and it’s through her story that we see the gospel story complete for the first time. Mary Magdalene is the first to see the risen savior, the completion of the story.

This woman who the world thought so insignificant- we don’t even hear most of her story in scripture and yet, it’s in her story much like Ruth that we see the completed story of redemption.

Mary Magdalene has long been a favorite character of mine, especially since seeing the portrayal of her in the Chosen. Her story holds hope and encouragement for each of us.

The story of Mary Magdalene in the Bible is a wonderful reminder that no matter how far we’ve wandered, or how broken or lost we feel we are never outside of Jesus’s reach. He is ready and willing to bring us home. To rescue and restore us.

For I am convinced that neither death nor life, neither angels nor demons, neither the present nor the future, nor any powers, neither height nor depth, nor anything else in all creation, will be able to separate us from the love of God that is in Christ Jesus our Lord. Romans 8:38-39

Mary Magdalene’s story starts in a place of bondage, but by the grace of God, it doesn’t end there. Our stories are in the hands of a master storyteller, and nothing -not even who we’ve been, or what we’ve done can stand between us in Christ and His will for our lives.

Therefore, if anyone is in Christ, he is a new creation; the old has gone, the new has come! 2 Corinthians 5:17

The Story Of Mary Magdalene Shows Us God’s Power

Mary Magdalene’s story is a wonderful picture of God’s power in our life. He brings a broken, lost, beyond-human-help woman that has been living possessed by demons. No one could help her. No one could save her- but Jesus. And so her story is a beautiful illustration of what He can do in our lives as well.

He determines the number of the stars and calls them each by name. Great is our Lord and mighty in power; his understanding has no limit. Psalm 147:4-5

Mary Magdalene Reminds Us That He Came For Us

It’s so easy to look at her story and just see another miracle in a field of them, wonderful yes but amongst so many others it’s so easy to forget its significance. He came for her. Just as the Woman At The Well, Jairus’s daughter, blind Bartimaeus, the woman with the issue of blood, and the man possessed by a legion of demons– He came for them.

Right where they are, right in the middle of their brokenness, in their pain. He didn’t wait until they cleaned themselves up because the truth is we can’t clean ourselves up without Him. We need Him to fill the God-sized hole in our lives that only He can fill.

We need Him to rescue us from the brokenness in our lives and the things we’ve been living in bondage to. We need Him, and so He came for us. She was the one, that He left the 99 to seek out, and He has done the same for us.

For God so loved the world that he gave his one and only Son, that whoever believes in him shall not perish but have eternal life. For God did not send his Son into the world to condemn the world, but to save the world through him. John 3:16-17

Mary Magdalene’s Story Is A Picture Of God’s Grace

Mary Magdalene like so many others in the New Testament is a picture of God’s grace, we don’t know what decisions got her to where she was when Jesus found her. We don’t know her past, but we see the result- and yet. And yet God.

God’s grace abounds, we don’t see condemnation, we see love. We see mercy and hope and restoration in her story.

For it is by grace you have been saved, through faith—and this is not from yourselves, it is the gift of God— not by works, so that no one can boast. Ephesians 2:8-9

His heart is to set the captive free, and this truth is yet again brought to life in Mary Magdalene’s story. He frees Mary Magdalene from the demons that have held her captive for Lord only knows how long and gives her a life of freedom and wholeness. He set her free and restored her in a way that only He could.

“The Spirit of the Lord is on me, because he has anointed me to proclaim good news to the poor. He has sent me to proclaim freedom for the prisoners and recovery of sight for the blind, to set the oppressed free, Luke 4:18 NIV

The Story Of Mary Magdalene

The story of Mary Magdalene is a picture of faith that we all strive to possess. The kind of faith, that when all hope looks lost we return to our Savior’s feet. When it looks like the end is written in stone we keep showing up. When the ending feels like it’s coming flying towards us like a train on broken tracks we come back to the one who bought us with His blood.