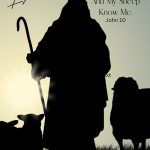 My sheep know my voice, it’s a passage many of us have heard before. But in our busy lives so removed from the times the text is written we tend to glaze over this story. In our rush for meaningful lessons we race on to other chapters, but stop, and tarry in this place for a moment.

Throughout the Bible we see many mentions of sheep, or shepherding from the old testament to the new. The writers of the Bible draw on these images and metaphors to communicate deep messages in a way that would have been easily understood by those in the time the text was written.

But in our modern lives much of the parallel has been lost. Unless you work around animals or raise them their is a chance you may not understand the my sheep know my voice passage at all. So come with me and pull back the time worn pages, and I promise you their is treasure hidden in John 10.

What does the Bible say about my sheep know my voice?

To really understand this my sheep know my voice passage we first have to dig in a little, we must first understand the role of the shepherd. Shepherding was a long and lonely job. It wasn’t glamorous. A shepherd would be gone with their sheep all year long grazing them over the countryside and caring for them.

The shepherd couldn’t leave his sheep and come home, this was a full time commitment, day in and day out. A good shepherd knew where the best pastures and water could be found and so they would take their flocks out far away from home.

At night the sheep would be herded into a sheepfold (a walled enclosure with one opening where the shepherd or gatekeeper would sit), these structures would keep the flock safe. A shepherd would stay awake all night watching over the flock sitting in the entrance and guarding them from harm. You can see what is left of an ancient sheep fold in the photo below.

If the shepherd fell asleep or left his post at the entrance of the sheepfold the sheep could get out and wander away, be stolen or injured. Sheep are not the brightest creatures God ever made and they get themselves in a lot of trouble by themselves when left to their own devices.

The sheepfold was an important place that protected the flock from predators or thieves, often many flocks would be combined in the sheepfold for the night, at this time a sheep could get separated from the rest of its flock. This would allow shepherds to rest and take turns guarding the sheep through the night. It seems like a mess doesn’t it? A mass of sheep, many looking the exact same. How could you tell them apart?

But each flock knew their shepherd’s voice. In the morning each shepherd would call their sheep, and they would separate the flock once more and go on their way.

My sheep know my voice scripture

…Anyone who does not enter the sheep pen by the gate, but climbs in by some other way, is a thief and a robber. The one who enters by the gate is the shepherd of the sheep. The gatekeeper opens the gate for him, and the sheep listen to his voice. He calls his own sheep by name and leads them out. When he has brought out all his own, he goes on ahead of them, and his sheep follow him because they know his voice. But they will never follow a stranger; in fact, they will run away from him because they do not recognize a stranger’s voice.”…

While sheep aren’t particularly bright and have a knack for getting themselves into interesting situations, studies have shown that sheep are able to recognize faces and voices and even familiar smells. This allows them to recognize their shepherd, bringing us back to “my sheep know my voice”.

Therefore Jesus said again, “Very truly I tell you, I am the gate for the sheep. All who have come before me are thieves and robbers, but the sheep have not listened to them. I am the gate; whoever enters through me will be saved. They will come in and go out, and find pasture. The thief comes only to steal and kill and destroy; I have come that they may have life, and have it to the full.

Why is it important for the sheep to know the voice of the shepherd?

A sheep recognizes his unique shepherd’s voice, which means even in the sheep fold where they are all mixed together they know when their shepherd is ready to leave. Because they know his voice they come willingly with out fear or trepidation. Trusting that he is going to lead them somewhere good.

If the sheep didn’t know the shepherd’s voice they would be lost, and not know where to go. They could easily be left behind in the sheepfold when the others left.

What are the five qualities of the Good Shepherd?

What makes a good shepherd? What sets him apart? What do they do? Let’s take a look at the characteristics of the good shepherd:

The shepherd is willing to put his flock’s needs above his own. He will lose sleep to watch over them while they sleep. He will sacrifice his comfort for them staying with them despite the weather. He cares for his flock first, which means he will care for them before he takes care of himself.

The flock knows that their shepherd is good, and worthy of trust. Because they know he cares for them they’ll listen to his voice and follow him.

A good shepherd protects the sheep in his charge, he stays up watching over them, putting their needs first. His sheep are always on his mind.

The good shepherd cares for his flock guiding them to good pastures and fresh water that will nurture them. And he guides them to safe places where they can rest without fear.

The shepherd cares for and nurtures his flock meeting their needs. He tends the injured ones, cares for the weak ones, watches over the young ones. Often carrying ones that stray, or tire, or get tangled along the way.

The good shepherd lays down his life

When the need arises the shepherd will defend his flock, even giving up his own life for the protection of those in his charge. The shepherd is the first and last line of defense for the flock and he willing puts himself in danger for them. Because they are valuable to him, he is willing to stand between them and whatever tries to harm them.

My Sheep Know My Voice

The parable Jesus is teaching in John 10 reminds me of a time our cousins came over, and while they were here one of the kids wanted to play with our goats. He ran to the gate with youthful anticipation to pet them as I followed just behind. We quickly managed to unlock it and swing the heavy panel open so we could enter the pasture.

He was so excited, but that excitement soon turned into annoyance as the goats scattered in all directions every time he approached. No matter how slowly he moved, or gently he talked to them they wanted nothing to do with him.

Every time he’d take a step they would dash to another part of the pasture always out of reach. The cousin turned to me with exasperation on his young face, and asked “Why won’t they come to me?” “Don’t they like me?” He was speechless when I called them to me and they all came running and let me handle them.

You see as much as he wanted to be their friend they didn’t know him. He wasn’t their shepherd (or goat herd in this case), they didn’t know the sound of his voice. So when he called them they wouldn’t come, and when he approached they ran because he was a stranger. But when I called they followed me trustingly because they knew my voice and trusted me. Just as in this story of my sheep know my voice.

Jesus Is The Good Shepherd

Do you know The Good Shepherd’s voice?

Just like the shepherd’s sheep in the my sheep know my voice story found in John 10 we must learn to recognize our good Shepherd’s voice. But that isn’t something that just happens, we must spend time with Him, we must surrender to Him and allow Him to lead us. We must trust our Shepherd, just like the sheep.

So how do we do that? How do we become good sheep as it were, because the world is hard and we NEED a good shepherd who will watch over us and guide us. The good news is He’s already there, He’s ready and willing to shepherd us. So what’s the next step?

Surrender. The next step in “my sheep know my voice” is surrendering our will and allowing Him to lead us.

My sheep know my voice- to know His voice we have to spend time with Him. We have to be around Him, not just for a couple of minutes or an hour on Sunday. We have to make Him a priority. We have to dig deep and grow our relationship with Him. So that when we face life’s storms or walk through the dry places with Hagar we too will know the voice of our good shepherd calling us to His waiting arms.

What stands out to you the most from the my sheep know my voice story?