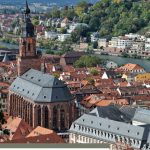 Welcome back to Germany!

Today we are heading to the city of Heidelberg Germany.

Heidelberg Germany is an ancient University town sitting by the beautiful Nekar river and surrounded by thick forests that have been loved by poets and artists, scientists and authors alike. This trip was set up for us by a co-worker of mine, except he works in the German plant, the funny thing is that he is actually an American. He came to Germany to go to college and ended up finding his bride here. She works for the College in Marburg where he was attending. We appreciated him setting tour day up for us. and can’t wait to see what we will find here.

Before we met them at the local train station, we stopped into our favorite local pastry store and had breakfast. I had a strawberry danish and decided to snap a photo of it for the girls back home. For some reason, they didn’t fully appreciate the beauty of it. I wonder why? 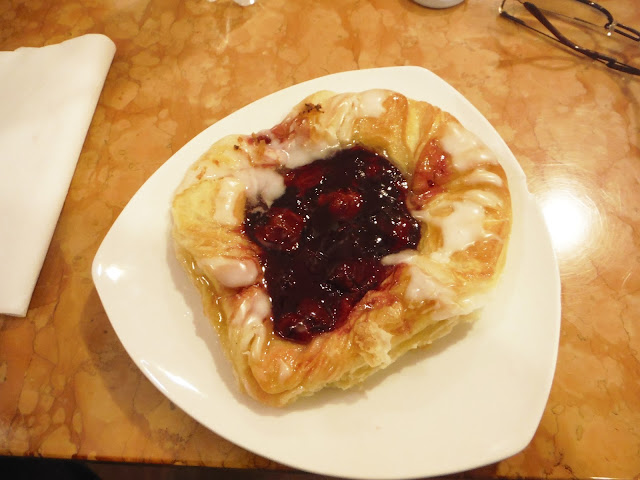 Then we headed up to the station and waited for our guides to show up.
It was 6 am when we got on the I.C.E. train for a 2-hour ride. It was a calm ride – well, (except for the gentlemen who tried to sneak around and ride for free, but he was caught by security and was removed from the train at the next station). 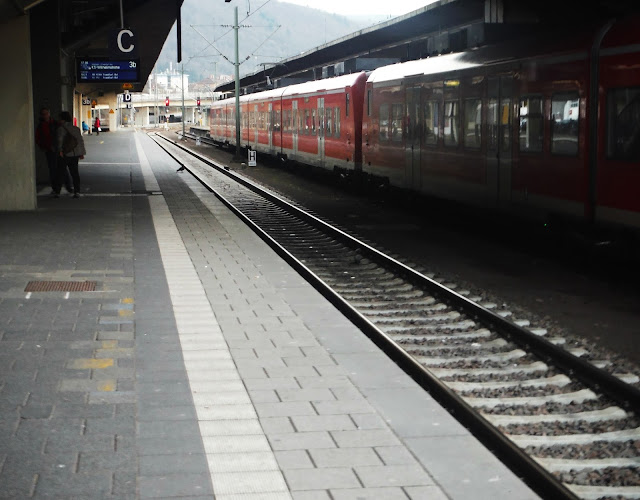 We exited the train and walked about 1 and a half miles to get to the area we wanted to go to. It is the old town area of Heidelberg, Germany . The walkways are cobblestone and are pedestrians only… well mostly except for an occasional cab or tourist bus. 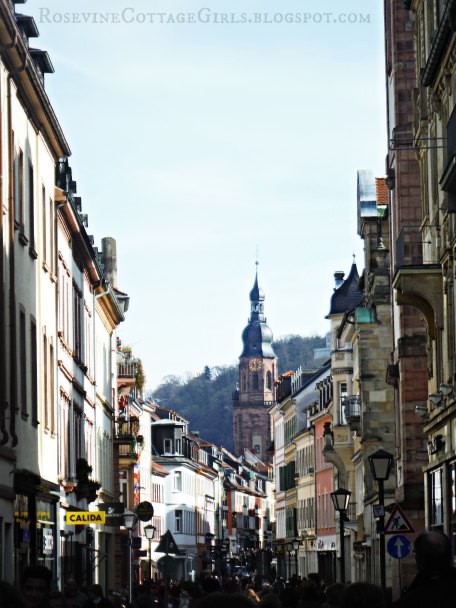 The walk from the beginning to the end in which you pass many interesting shops and curiosities and brings you to the castle, which is another mile down the street. 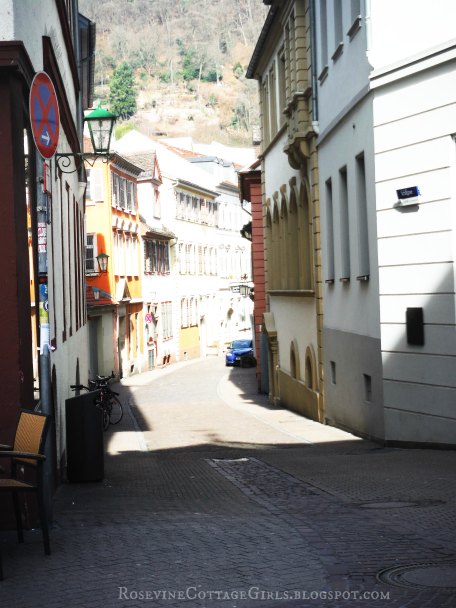 The history of this town begins in the 5th century BC when a huge fortress of refuge was built by the Celts. They also built a place of worship. They were built on the Heiligenberg Hill or the Holy Mountain. 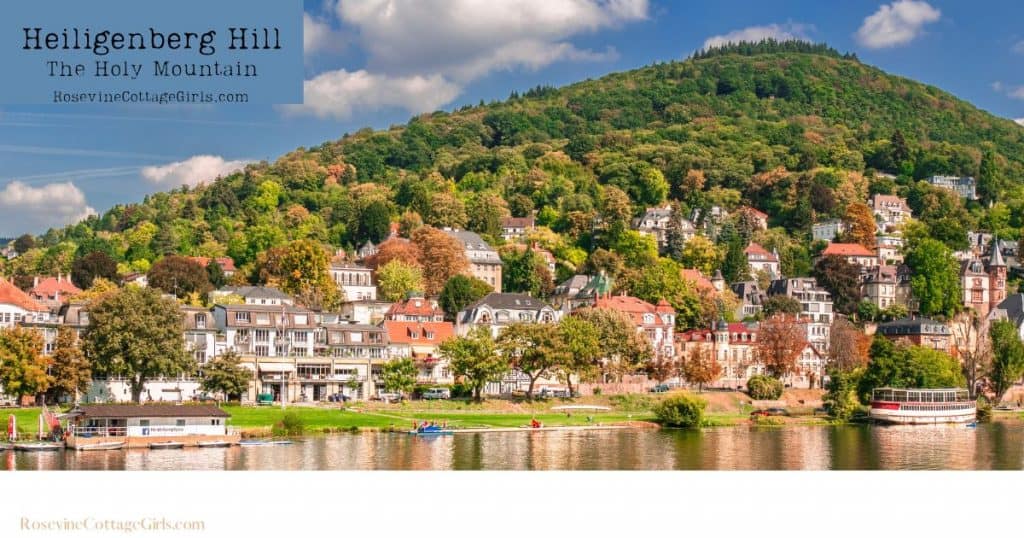 By 40 AD the Romans had built a fort and a signal and tower on the bank of the Neckar river along with stone bridges spanning the river. They were occupied by the 24th Roman cohort and the 2nd Cyrenaican cohort. They built shrines and temples atop the mountain for worshiping their idols. The Romans remained there until 260 AD when the camp was conquered by Germanic tribes 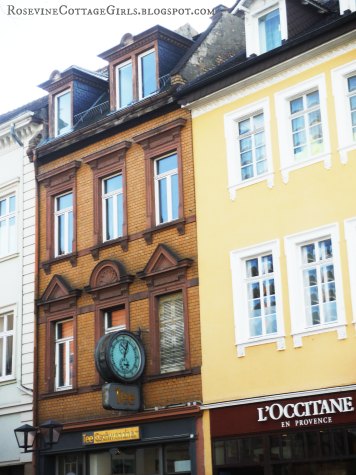 In 863 AD, the monastery built in the honor of Saint Michael was built on the Mountain of Saints inside the walls of the Celtic fortress. The bishop of Worms extended his influence in the valley by having the Schonau Abbey built in 1142. 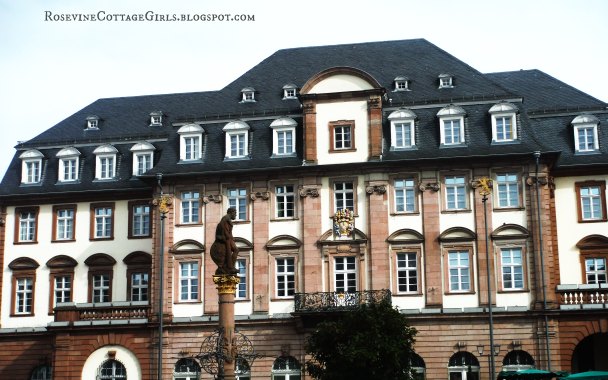 The first reference of Heidelberg was in a document in that Abbey dated 1196, and this is considered to be the town’s founding date. In 1214 the Duke of Bavaria, Ludwig I acquired the Palatinate and this castle came under his control. In 1303 another castle was built for defense. In 1386, Heidelberg University was founded by Rupert I, Elector Palatine. 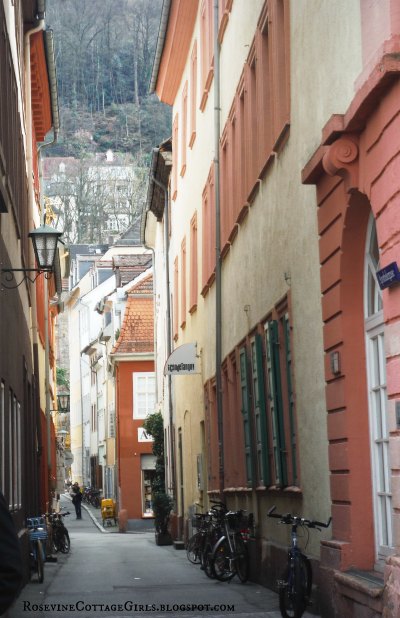 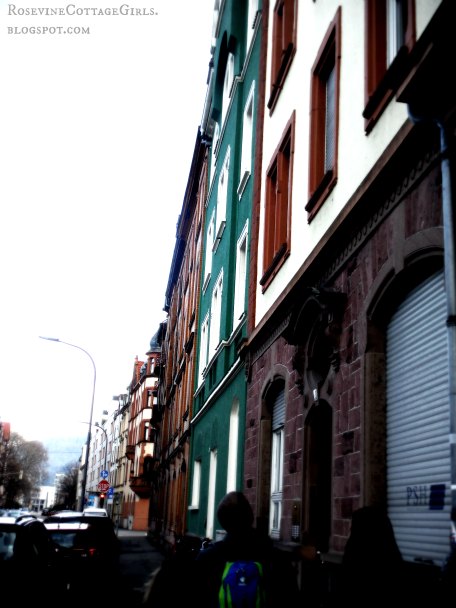 The first reference of Heidelberg was in a document in this Abbey dated 1196, and this is considered to be the town’s founding date. 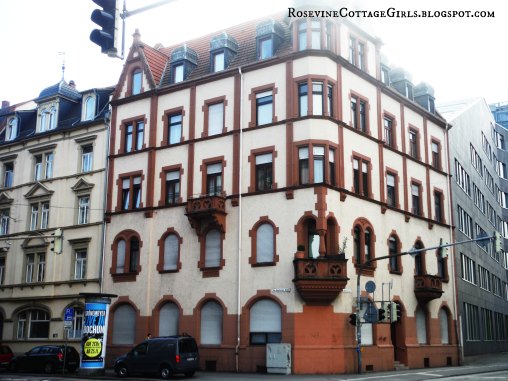 The first structure of the castle was built before 1214 and by 1294 it was expanded into two castles. In the late 17th century the castle was sieged repeatedly and it was destroyed by the French of the Grand Alliance.

In 1537, the upper castle was destroyed being struck by lightning in a terrible storm. By 1650 the castle was expanded to structures now present.

During this time the monastery on the Holy Mountain had suffered much over the years and crumbling in disrepair.  In 1503 the belltower fell killing the three final monks.

The castle changed hands several times thru the 30 years war (1618-1648). This war was one the longest, most destructive and deadliest wars in European History resulting in 8 million casualties. 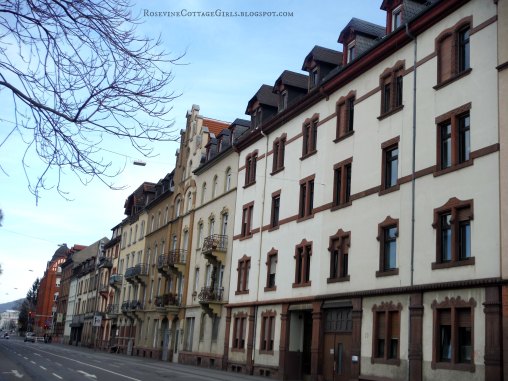 In our day trip here, we visited 3 churches, the castle and a special bridge. Amazingly during WWII, this city was not destroyed like many of the others that I had the opportunity to visit on this trip. 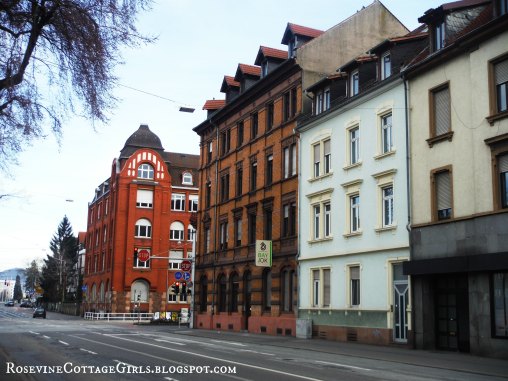 During WWII the Nazi’s decided that the Holy Mountain would be a good place to build an amphitheater and started construction just beneath the location of the old monastery. Heidelberg had no major industry and the Army wanted to use the city as a garrison base it was basically saved except that when the Germans left during the US advancement it destroyed 2 bridges on their way out of town to slow down the advancement of troops in their wake. In the next couple of posts, we will look at the castle and the churches. 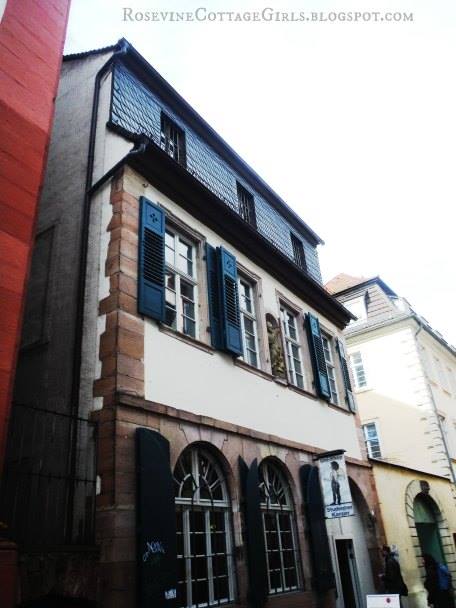 This building is the student prison. In the 16th century the people began to complain about some of the wild exploits of the students of the university. The University’s answer was the Studentenkarzer or the Student Prison. The offending student would be jailed here for a sentence of anywhere from a few days to three months. There was an internal door that opened that allowed the student to attend classes by day and return to confinement after his studies. Things that you could be jailed for are things like womanizing, disturbing the peace, public drunkeness, etc. The walls and the ceiling are covered in graffiti that spans the centuries. There is a chair, a table and a bed in the small cell. Although meant as a punishment some of the scholars felt a stay in the studentenkarzer a rite of passage. The school discontinued using the prison in 1914. 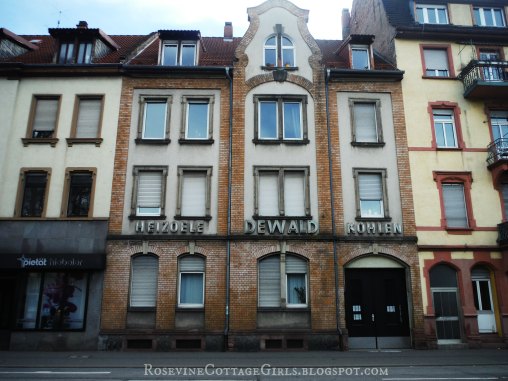 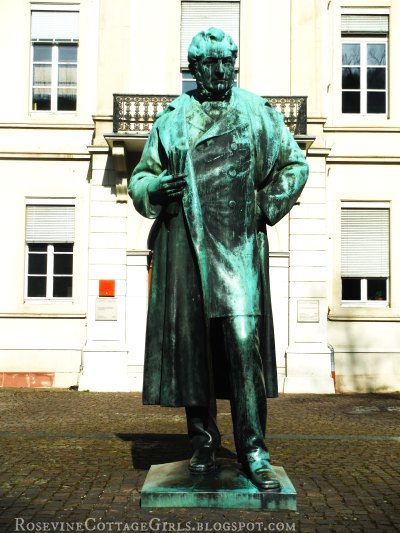 This is the statue of  Robert Bunsen.  Mr. Bunsen was a brillant chemist who studied at the University of Gottingen where his father worked as the chief librarian. 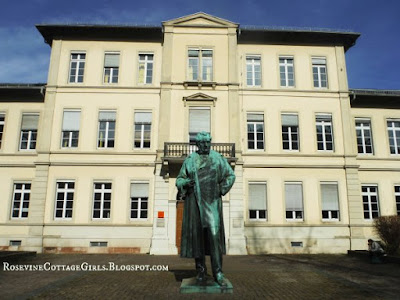 The building behind Mr. Bunson is the science building for the Heidelberg University.

In University Square in Heidelberg there is a monument to the reformer Martin Luther. The square lies over the former Augustan Monastery which Martin Luther visited and debate in 1518.  This debate was set up so that Luther would have an opportunity to present his views to the Augustinian order in which he belonged to discuss the churches view on indulgences  which he was concerned. Indulgences would range from 25 gold florins for kings and queens, 3 florins to the merchant class and 1/4 florin for the poorest citizens. Johannes Staupitz was the head of this order and they were generally supportive of Luther’s way of thinking and he wanted to give him an opportunity to communicate his thoughts on the issue even though his opponents wanted him silenced. This disputation took place in April 1513 and Luther spoke of the “theology of the cross” as opposed to the “theology of glory”  as Luther began to understand that the late Medieval Roman Catholic Church was at odds with the bibles original teaching.   This tribute was installed to honor him in 1983. 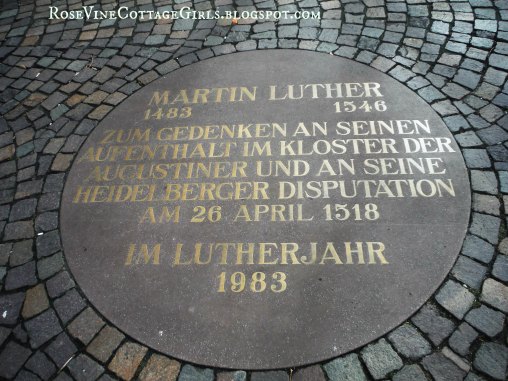 See  my video of the trip to Heidelberg Germany

In medieval times in the life of the university students in Germany, there was a disputation that allowed scholars to post their views on bulletin boards at the university in form of a thesis and that left open the thesis for debate. October 31, 1517, Martin Luther nailed to the church door in the castle of Whittenberg Germany his 95 Thesis leaving it open for debate and it sent shockwaves through the church. 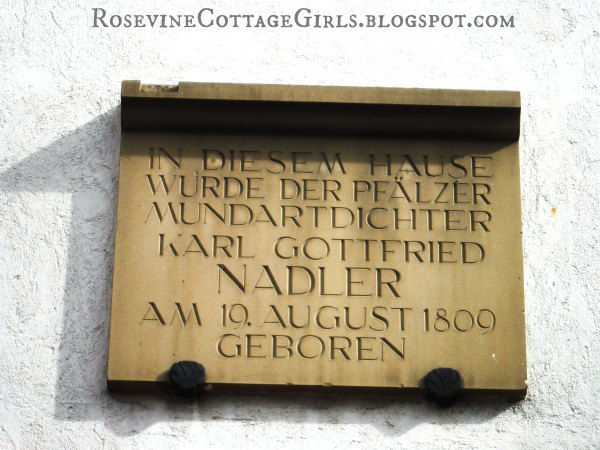 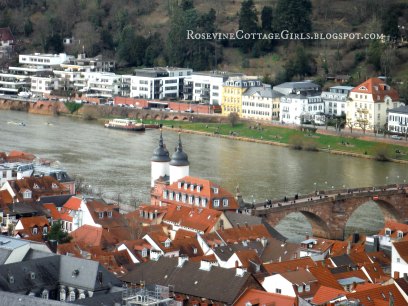 In 1838 Mark Twain on his European travels spent 3 months here in Heidelberg. He wrote about his stay here in his book ‘A Tramp Abroad‘ in 1880.

There were so many beautiful places here in Heidelberg we could not fit them all in this post. Check out our video to see more of this beautiful village.

Have a Blessed day and until we meet again.