Safe In His Hands

A couple weeks ago some friends came to stay with us and I found myself out in the dusk hours between day and night teaching their 10-year-old grandson to catch fireflies. At first, he tried to catch them by slapping his hands together in a squashing manner. I stopped him and told him to watch the way I did it… as we waited for another firefly to show it’s self he watched my every move eager to learn the secret to catching these little creatures. To not just squish them but to make sure they are safe in his hands.

Safely In My Hands

Gently I cupped my hands around the spot where a flash of light had been- and to his delight seconds later a warm glow flashed through my cupped fingers.

As I opened my hand to reveal the little bug sitting safely in the hollow between my hands,  the bug sat unharmed and again spread its wings took to the sky. A small little light echoing its path across the darkening yard.

I explained to him it was all in the way you caught it, it must be in the palm of your cupped hand or you’ll only crush its little body…

With eager child-like enthusiasm, he chased these magical creatures through the yard as the stars began to peek through the heavens above. Dashing back and forth as little flashes gave away the location of the little bugs until his hands closed around them bringing them close so he could study them as the flashed in his hand before returning to the air and the game continued. 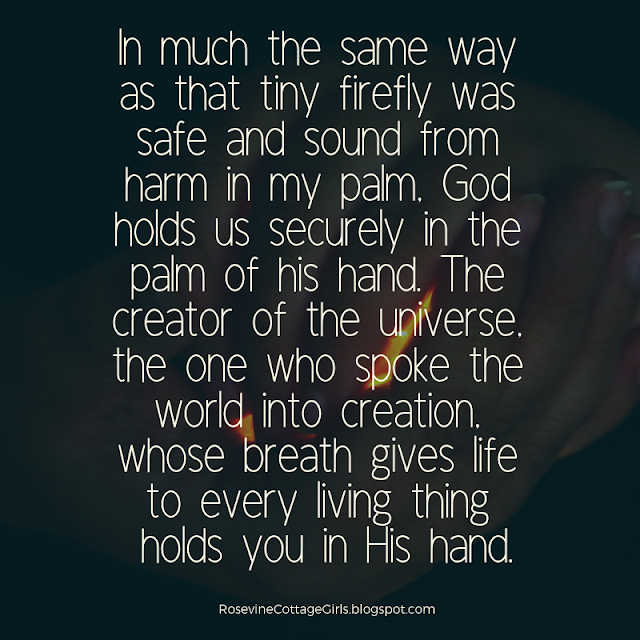 We Are Safe In God’s Hands

In much the same way as that tiny firefly was safe and sound from harm in my palm, God holds us securely in the palm of his hand. The creator of the universe, the one who spoke the world into creation, whose breath gives life to every living thing holds you safe in His hand.

Before you go, Check out these other articles: