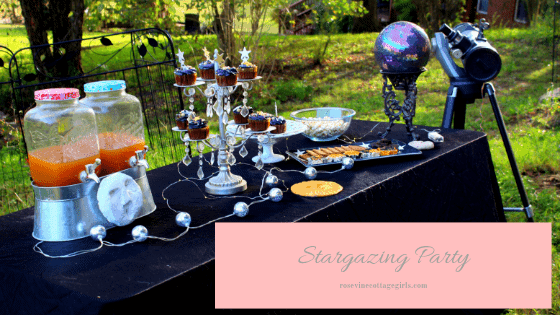 Spread the love
A couple of weeks ago we were graced with a meteor shower- and on a weekend! So, of course, we had to do something a little special- enter our star party! Yes, we probably have way too much creativity in our house for our own good but it’s always fun!
After jumping on Pinterest for some inspiration, we didn’t really find anything. A couple of children’s parties some pretty beneath the stars events and a sprinkling of outdoor movie setups. We wanted classy, functional, cozy with a sprinkle of sparkle! Because naturally, sparkle makes EVERYTHING better!
Pin For Later!
This post contains affiliate links

Contents hide
1 Hosting A Star Party
1.1 Food Ideas For A Star Party
1.2 Table Decor For A Star Party
1.3 Setting Up For A Star Party
1.4 Related posts:
I’ve been obsessed with astronomy for ages- I even made a spaceship out of cardboard boxes when I was a kid to “adventure into space” in. I spent hours in that thing letting my imagination run wild! My sister who hated the feeling of cardboard didn’t see the appeal but I love it!
So, of course, you can find me out on dark nights with my telescope, my camera, or a favorite a floaty in the pool watching the stars- or the moon depending on the night. Whether it’s full moons, blood moons, blue moons, meteor showers, a lunar eclipse, or just a regular night I love sitting out beneath the sky listening to the night and watching His creation dance across the sky.
What better way to enjoy the stars than having a star party? This is a great way to spend a summer or fall night, and if you have a space-loving kid a great birthday party idea. 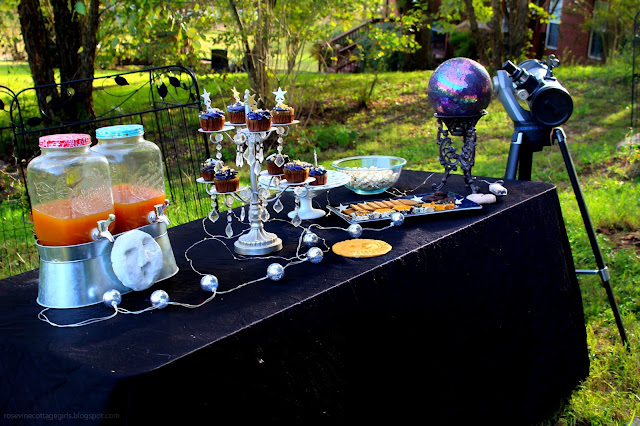 Food Ideas For A Star Party

For our star party, we went with these amazing galaxy cupcakes [you can snag our homemade galaxy cupcakes recipe here], with homemade icing and glitter star decor. They make such a fun food idea and an added bonus as the double as table decor. We plated the cupcakes on a gold and white star cake plate and a gorgeous sparkly silver cupcake holder.

We also made this adorable s’more station with star-shaped marshmallows [check out our homemade marshmallow recipe] dipped in colorful sprinkles. A s’more station is a great idea for a star party that allows your guest to make a sweet treat even in the low light setting of stargazing. For the s’more station we placed everything on an adorable navy blue star plate. 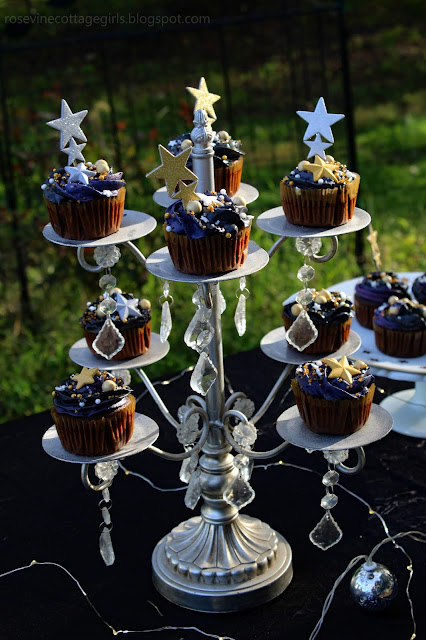 For a drink, we went with fresh apple cider for a tangy fall flavor, some other great options would be:

And of course, we also had popcorn for people to snack on while they stargaze. 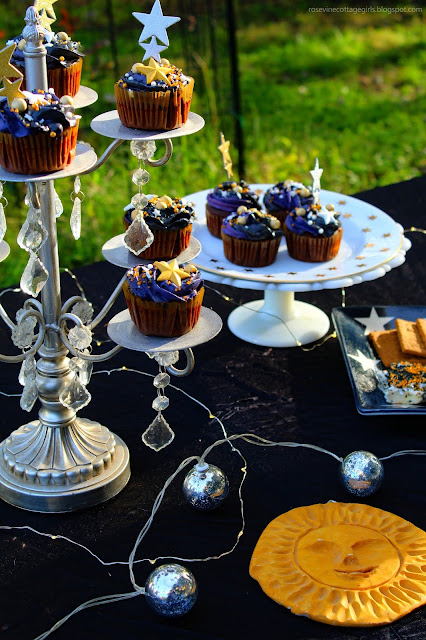 Table Decor For A Star Party

We used a fold-out table to hold the snacks and drinks with a black tablecloth over the top. Down the table we place these beautiful mock mercury glass LED lights and a strand of a simple LED fairy lights to add a bit of light so you see the table in the dark- nothing worse than grabbing a cupcake by the icing- but not enough to make it hard to see the stars.

You don’t have to go crazy on your star party decor, simple is often better than tons of decor.  You could also use some candles instead of LED lights if you wanted. 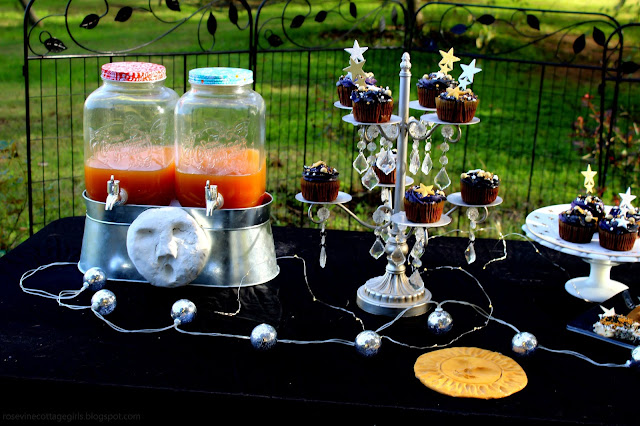 For a drink dispenser, we pulled out our Pioneer Woman drink dispensers and filled them with apple cider, [on a colder night this could always be exchanged for a warm drink dispenser]. This baby comes in handy so often! We’ve used it at almost every party we’ve hosted over the last few years.

For table decor for our star party, we used this stunning mosaic garden globe we picked up at Hobby Lobby years ago,  we also used these cute moon and sun clay sculptures that mom made when we were finishing our basement. 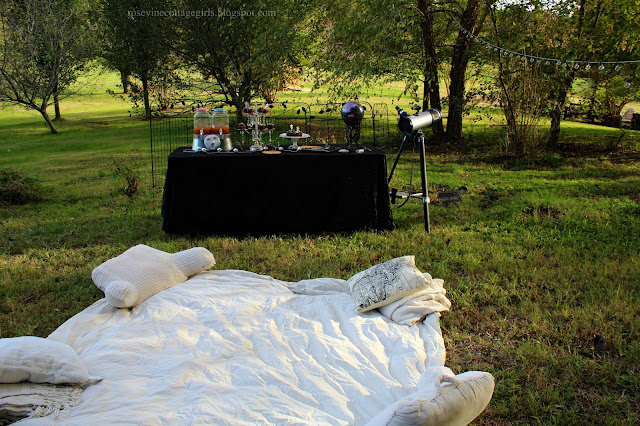 Setting Up For A Star Party

Comfy is a must when you are spending time stargazing, soft throw pillows, squishy arm pillows and throw blankets to snuggle under. We placed a thick comforter down to sit on and placed the pillows around the edges. You could also add fairy lights around the edges so that you can see the blanket without your vision being affected.

Some other ideas that might be nice for a star party would be: 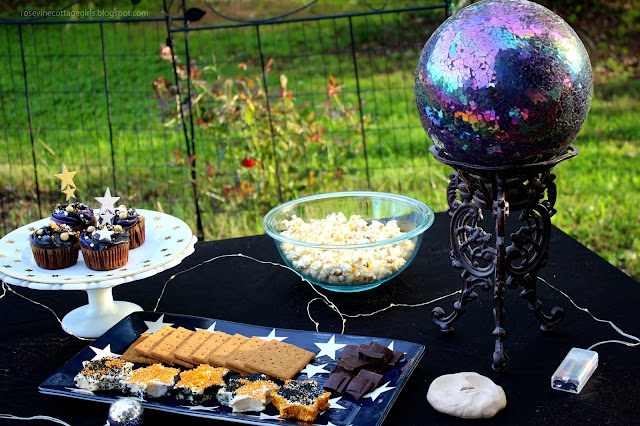 Last but not least we pulled our trusty telescope for the star party. Depending on what you plan to find in the night’s sky a telescope is not required. You may want to have a pair of binoculars handy also. 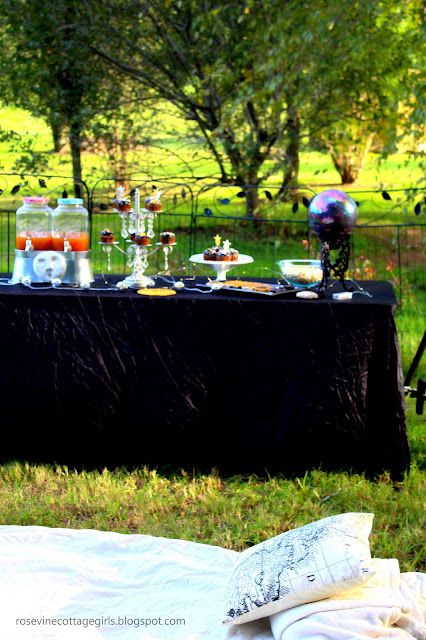 Lift up your eyes on high And see who has created these stars, The One who leads forth their host by number, He calls them all by name; Because of the greatness of His might and the strength of His power, Not one of them is missing. Isaiah 40:26 NASB

Before you go be sure to check these out:

1 thought on “How To Host An Amazing Star Party”