Skip to content
The Tennessee Renaissance Festival is here and this weekend Mr. Cottage took my sister and I along with two of our friends. We had such a great time! 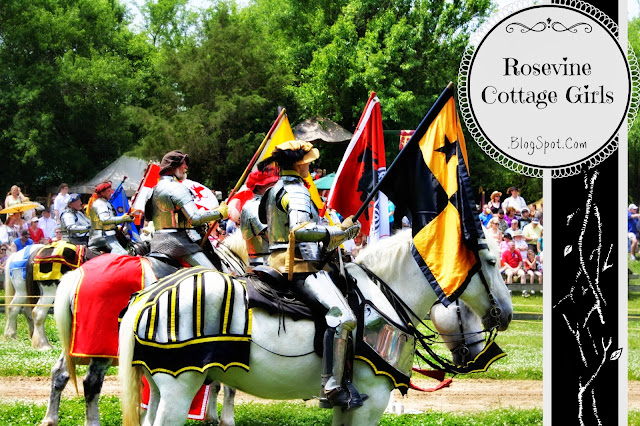 Now, the joust is hands down our favorite part of the Tennessee Renaissance Festival! Each section gets their own knight to root for and there is townfolk in each section to lead the cheers. Every year we go these volunteers have been really funny and did a really great job keeping the people entertained in between the running of the horses.
Jousts were done in the 13th through 16th century AD and were a huge part of medieval castle tournaments.  Knights would gather for these tournaments testing their skill against one another. The knights were separated by a tilt and they would use wooden lances and face one another on their mighty steeds and pointing the lances that were eight to ten feet long and made out of ash or poplar and hollow so that they would shatter on impact so as not to injure anyone too badly.  When given the signal to begin the knights would hold out their lances pointing at the opponent and urging their horses on, would rush at their opponent.
There is a point system depending on where your lance hits the opponent and the top points are awarded for unseating the opponent knight. The knights were often injured and had to spend a lot of time practicing using the quintain to prepare them. The quintain was a swinging arm that was weighted down on one side and had a shield on the other. The knight would ride hard and fast with his lance and hit the shield then have to hurry and get out of the way of the weight that would come swinging around his back and slam into him.
The knights would then compete for the ring.  A ring was set in the area of the tilt and the knights one at a time would run their horses and try to get the ring on the end of their lance.  This, in the medieval period, was another way for the knights to practice and hone their skills.
We went the last weekend and the jousting was amazing! The horses were absolutely gorgeous (Sorry I love horses!). During one of the matches, one of the knights got unseated during the joust. He fell so hard it bent up his leg armor.  In the medieval period, the game would then change to a match of swords. The knight still on his horse would dismount and the knights would battle using double-edged swords or maces.  The swords were so heavy that they would have to be used two-handed. 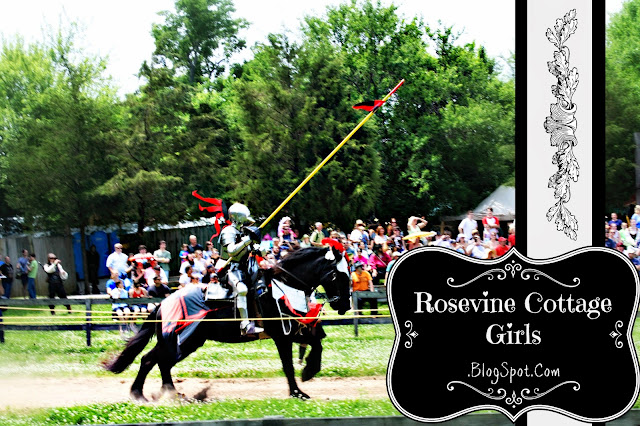 Another knight was hit in the shoulder with a lance so hard he was injured. Thankfully they had metal armor.  In the 13th century the knights would have only had padded armor or leather armor when these festivals began, but by Queen Elizabeth I reign the plated armor was being used.  This knight above is using a frog mouth helmet. It has small slits for the eyes that restricted the knights vision because of the small slits so that the knight had to tilt his head to see properly but the knights eyes were greatly protected.
They would have extra metal put in places where the lance would strike and the grill that would come up over the face to protect it.  They by this time added the steel manifer to protect the hand as well on the lance.  In the late 1500s and early 1600s a knight’s armor had been made with screws that held on the helmets to the body armor to keep them on if hit directly with a lance. Here they are again with lances in hand.  Look at how beautiful they are. 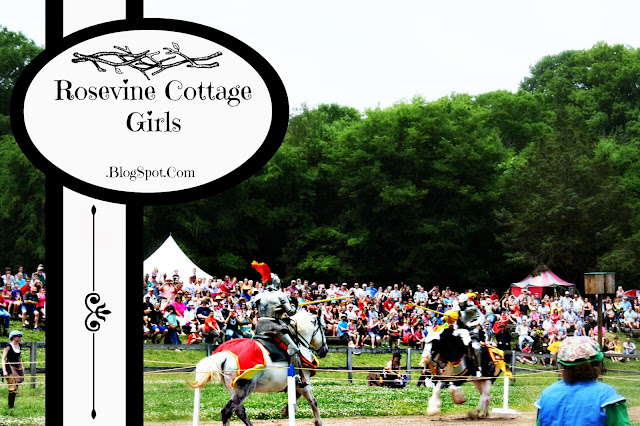 These horses are just so beautiful and to see these men and their skill is something to behold. 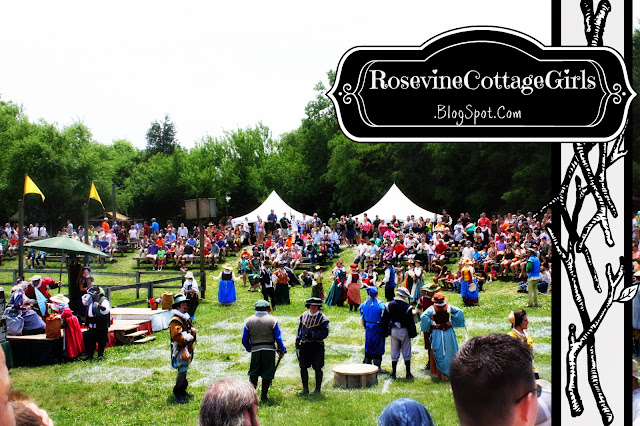 Then of course ye (wink) can watch the human chess match put on for her Royal Majesty Queen Elizabeth and her court’s entertainment. Characters enter a battle of wit, sword and spear against one another to see who wins the contest. This is funny and entertaining and the children seem to love it. Warning it is hot in the sun and we think that you need to bring back parasols to keep cool. Grab a cool beverage before getting your seat but we think that the family will like this part of the Tennessee Renaissance Festival for sure. 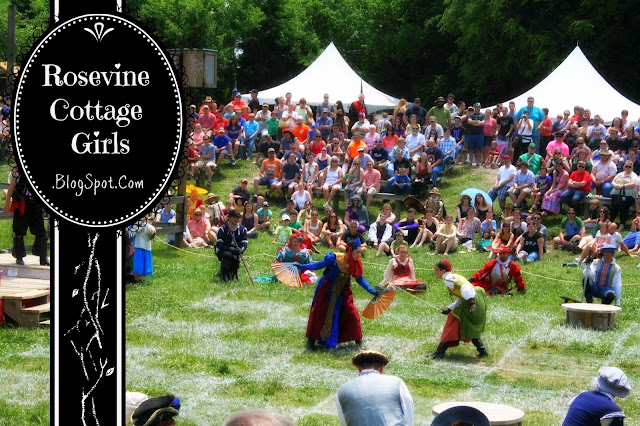 These two ladies were really cool! I have never seen someone fight someone using fans.

And if you have a mind to you can even try your hand at archery. The history of archery goes back all of the way to the middle ages. It is thought that the earliest people that used the bow regularly is the Egyptians.   In England an archery law was passed in 1252 that ordered all men that were 15 to 62 to own and know how to use a bow and arrow.  Longbows were made of yew and the largest ones had a draw weight of a hundred and fifty pounds. That is more than twice of todays modern hunting bows.
Which my sister did and did a great job, she has always loved archery and has to try her hand at it every year that we go. We just smile at one another when we get to it knowing she will be running up to try her luck at it.
It is said that a longbow archer during the reign of King Edward The III was able to shoot his arrow 400′.  That is a long way!  A trained archer could shoot 12 arrows a minute and an arrow could wound at 250 yards and kill at 100 yards.  Archers would wear decorative bracers that would provide protection and beauty. 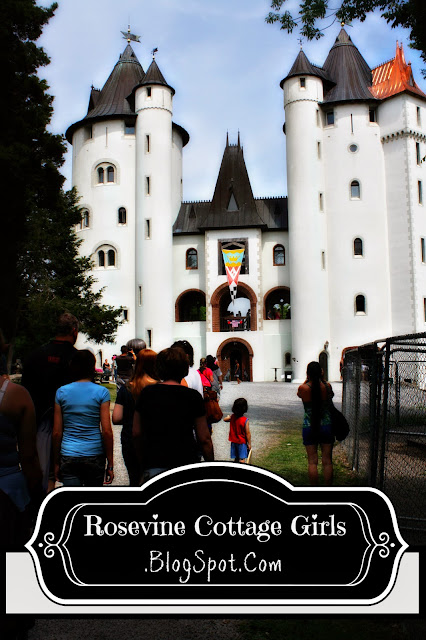 The couple that host the Tennessee Renaissance Festival has built a castle where they live but they have school busses that will take you over across the street and let you tour portions of the Castle Gwen if you want to.  In our experience, the lines are long and busses hot but the castle is wonderful and they have done a really great job building it. 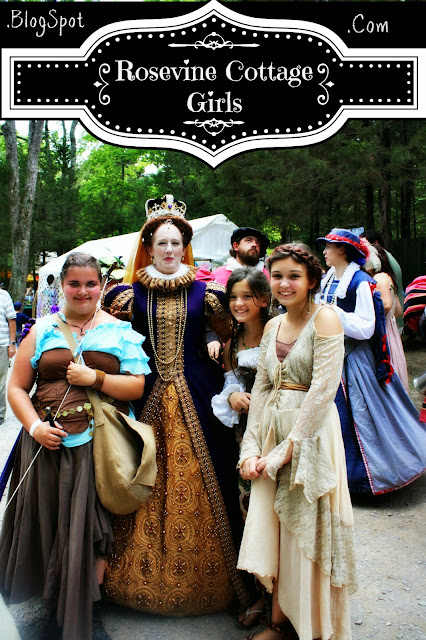 And of course you can get your picture taken with Queen Elizabeth of England! Which is exactly what Brianna, Anna and Aubrey (I took the picture) did while Mr. Cottage was standing in line to get turkey legs. 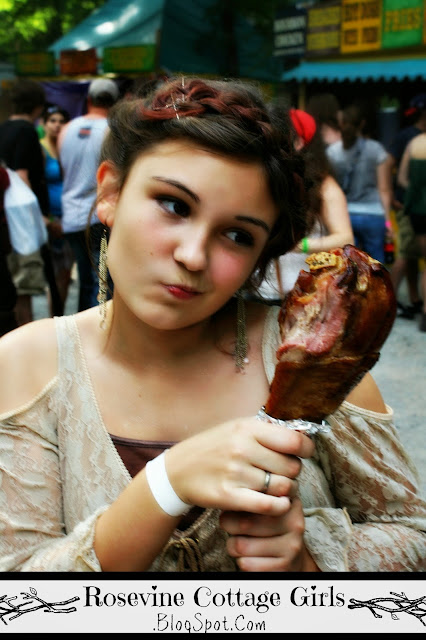 Am I really going to share? Um nope, this one is mine. The food at the Tennessee Renaissance Festival is pretty good for Ren Faire food.  We thoroughly enjoyed our turkey legs this day. They have pizza, hot dogs, cracker and cheese plates with fruit, and so much more. We always get the yard of lemonade because the days can be really hot there. 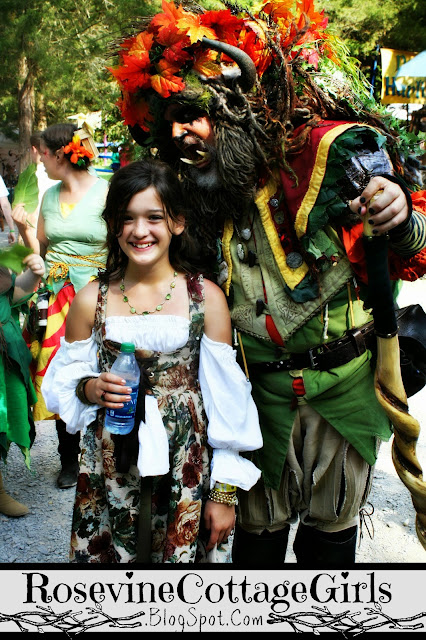 But beware of the troll! They eat little children you know (just kidding!)!  I don’t think he knew what he was getting into with this one.  Anna turned around looked up at him and told him that if he bites her, she will bite him back.  He promptly said that is why he was not going to bite her.  LOL!  I think he met his match.
Trolls are part of Norse mythology. They are magical and evil creatures. The belief in trolls predates Christianity there. It is said that the trolls are cannibalistic, they eat one another, livestock and people although they hate the smell of Christians and hate the sound of church bells. 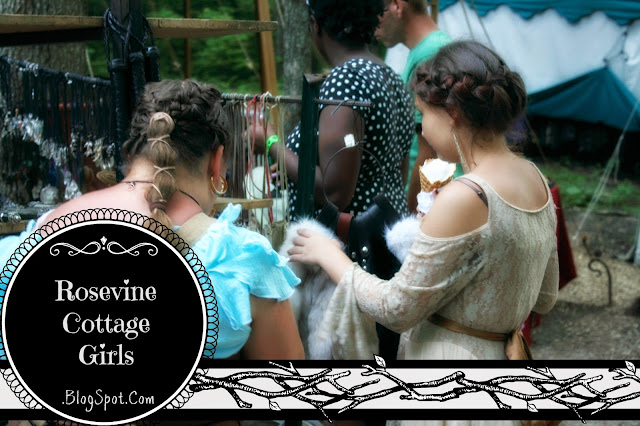 If you are a maiden who enjoys shopping this is the place for you, with everything from handcrafted jewelry and clothing to armor and medieval weapons. And so many shops to choose from! They even have face painting and hair braiding shops! 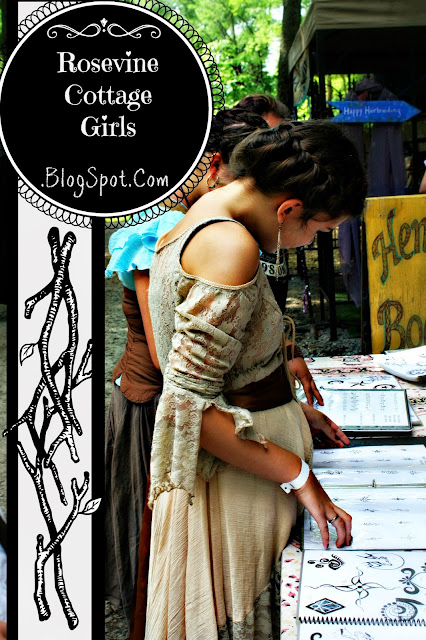 While at the Tennessee Renaissance Festival, Brianna and Aubrey decided to get a Henna body art tattoo done at one of the shops. Don’t worry, it comes off! They really loved them. And if you need to rest your feet there are dozens of shows to choose from! All in all we had a great time. We usually try to go every year and it is always so much fun! The Tennessee Rennaissance Festival is every weekend in May and Memorial Day, for more information check out their website. 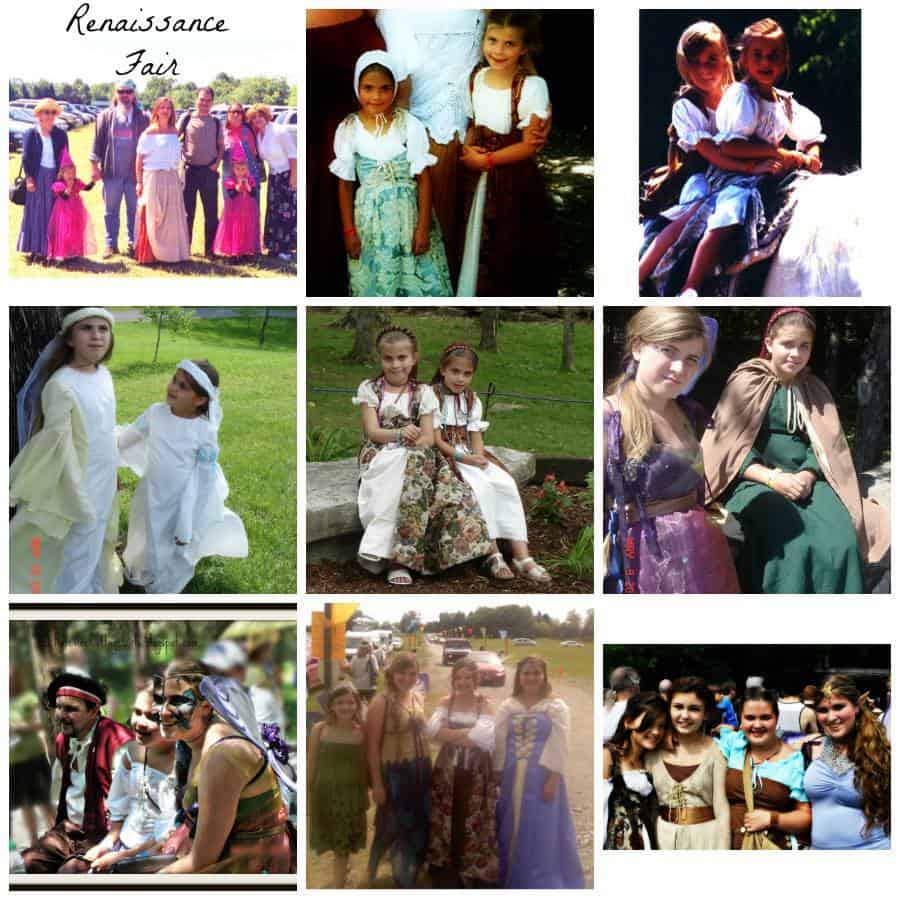 Last night Mr.Cottage took us to a rodeo that was performing near us. I’ve not been to a lot of rodeos (actually this is my…