Skip to content
Mirrors lie. Especially to us ladies.

They tell us we are fat, that we are ugly. That we are unwanted, unlovable and worthless. I was doing photography last summer for my friends Equine Obstacle Challenge and I was amazed at the fact that almost every lady out there hated something about herself. These women who had the courage to get on a massive creature and tell them what to do hated the way they looked. The hated their skin, the size of their body and so many other things that now one but them see. Where others saw that they were having fun, that they enjoyed being outside, that they weren’t afraid, they saw wrinkled skin tanned by days in the sun working with an animal who had stolen their heart.

I heard some ask no photos from the side, another that she never got pictures of herself taken. So as I sat there editing photos I couldn’t help praying that when they got to see these picture they would see themselves through His eyes, not their own. And you know what, almost all bought them and were surprised at how good they looked (It’s amazing how far photo effects and a little prayer will go). 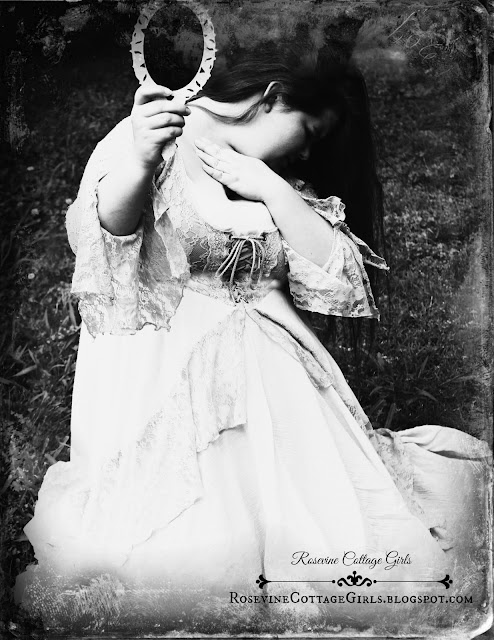 How much differently would we feel if instead of looking into the mirror with human eyes and seeing the pimple or zit those irritating freckles that someone enjoyed teasing us about? Or that we aren’t as tiny as some people. But instead, we looked in the mirror through His eyes. Instead, we saw what He sees. Mirrors lie because they can only see what the world counts as beautiful not what God considers beautiful.

Related Article: He Looks At The Heart

In the bible, most of the names that stick out are men, but there are some amazing women of God in those pages. Sarah, Miriam, Deborah, Jael, Rehab, Ruth, Ester, Hannah, Mary, Martha and her sister Mary, Jairus’s daughter (the one that was dead and Jesus brought back to life), Elizabeth, Anna, Joanna, The woman about to be stoned, The crippled woman, Tabitha, Syrophoenician woman & her daughter, The woman at the well, the woman who was bleeding just to name a few, trust me I can keep going.

Some of them made huge mistakes which are forever remembered through the pages of the bible. But they all have something to teach us. Some are lessons of Faith, others that no matter what others say God can use you for amazing things like Deborah leading the entire nation or Jael in her own back yard (or tent in her case).

All through the New Testament, Jesus is reaching out to women and not just the ones that have their life all straightened out. The woman about to be stoned was a prostitute. The women who anointed his feet was a sinner. He reached out to the ones who were considered trash, he reached out to the poor along with the rich. When he rose from the dead who were the first ones that He appeared to? A group of women.

Christians during the first century were often known as the ones that would go to the trash heaps or (dump) where Roman families would leave babies to be exposed, and rescue the infants. They most times were girls, but also children with the wrong color eyes, or hair, or were not physically the way the father wanted or were handicapped in some way. Midwives would place a newborn child at the Father’s feet. If they reached out and picked up the child it became part of the family, if not it would be taken outside and was exposed. Left to die. They said that it was up to the “gods” if it lived or died.

Jesus often does that for us.  He goes to the dump and picks us up out of the trash and says you are worth more than precious jewels. You are beautiful. You are not defined by the world’s standards but His.

Charm is deceitful, and beauty is vain, but a woman who fears the Lord is to be praised. Give her of the fruit of her hands, and let her works praise her in the gates. Proverbs 30:30-31

So get out there beautiful!  Be all who He has created you to be and let that beauty shine.