God took the Israelites the long way. He didn’t take them on the “super-God short cut”. The easy peasy way- the Autobahn at high speed. He didn’t put them on a jet and say have a nice comfy flight. No- he knew their hearts. He knew the people intimately, personally and he knew their hearts. He saw the rough craggy places that needed to be shaved away, he saw the weak places that would falter and fail. 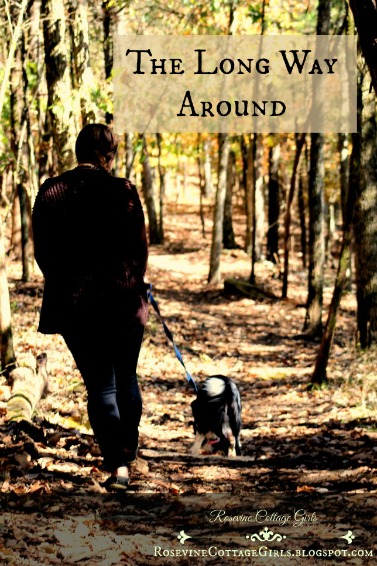 He knew they would not have the heart to go into battle and the shortcut, well that required battle- it would mean war. He knew they weren’t ready for that, weren’t ready to face the giants that awaited so he took them the long way ’round. He put them through boot camp- well the 40-year-plan. They had to earn blisters and then calluses before they were ready to get where they were going.

40 years of God leading them through the dry places, serving them His M.R.E.’s, teaching them to lean on him, and waiting for them to be ready. They had to go through training before they could enjoy what he gave them. They had to go the long way, the scenic route, the back road, the non-direct path.

For I know the plans I have for you,” declares the Lord, “plans to prosper you and not to harm you, plans to give you hope and a future. Jeremiah 29:11 NIV

Abraham is a perfect example of the back roads, of God leading down the in-direct-paths. God led him away from everything and everyone he knew, his neighbors probably whispered that he was crazy but he went. He followed God from place to place, but the story isn’t about his destination. It’s the places along his “road trip” the experiences that the bible tells.

God has a history of taking people the non-direct route, the way that doesn’t make sense- to teach a lesson before you reach the destination. Almost as if it’s not so much the place but the journey there that matters. It’s on the trip that you learn to rely upon, to lean on Him. It’s on the exhausting hikes and endless curves in the road that you grow closer to Him and learn to hear His voice. It’s in hanging onto Him that He files away a little more of the world to make room for Himself.

0 thoughts on “The Long Way Around”