Welcome back to Germany and again thank you for accompanying me on these trips. This time we find ourselves in Frankfurt Germany. It is known as Frankfurt am Main now. It had other names also. It was first known as Frakonovurd in Old High German and was one of the first names mentioned in written records in 794.

It then became Frankenfort during the middle ages and then Franckfort in the modern era. 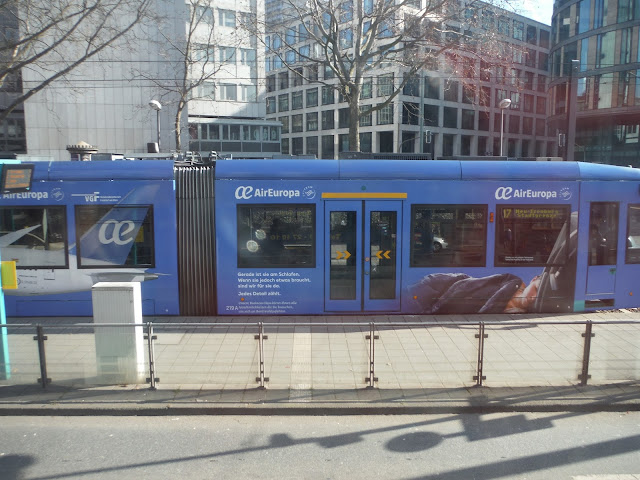 In the 1800’s the name Frankfurt had been established as the official spelling. The city’s full name is Frankfurt am Main and the city is located on an ancient ford on the Main river. 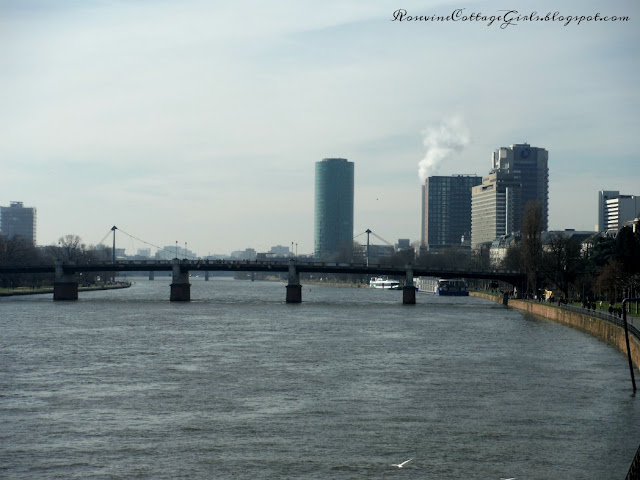 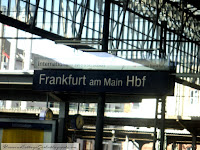 Since the Franks used to live here the name reveals the legacy of the city, The ford of the Franks on the Main.
A Little History Lesson:
The Franks are an anglo-saxon  Western German speaking people that invaded the western empire back in the 5th century and then established the most powerful Christian kingdom in the area in the medieval period in history.

In 300 we see the Franks living on the eastern banks of the lower Rhine area.  There were three sects of these Franks, the Salians, the Ripuarians and the Chatti or Hessians. Remember the Hessian troops from your history lessons of the U.S. Revolution where the Hessian’s were hired by England to fight for King George III against the pesky and rebellious Patriots in the colonies of America?

Frankfurt is one of the major cities in Germany and the largest in the Hesse State. It is also known as a global city. It is a major hub for Air, Rail and Auto transportation.Before WWII the city was globally known for its unique old town with timber-framed buildings, the largest old town in Europe.

Frankfurt was the home of Johann Wolfgang Goethe a writer and statesman and his home is now a museum open for tours.  He was born in 1749 and died in 1832. He and his sister were educated at home (yay home schooler!) until the age of 16 then studied law.  He practiced law but was also a writer one of which he was known for his Faust about the man who sold his soul to the devil. (You can find more of his works here) 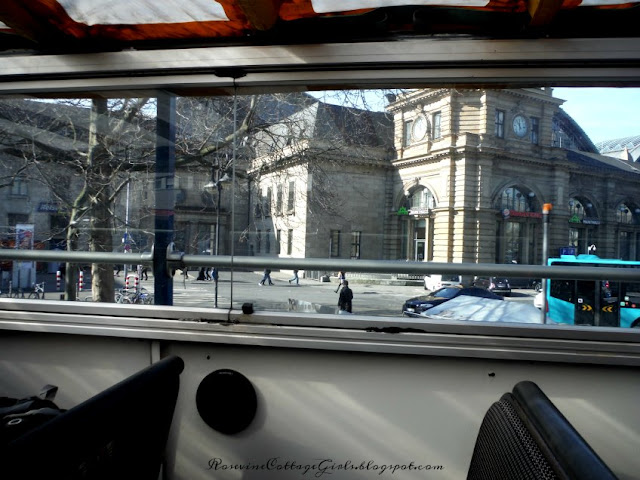 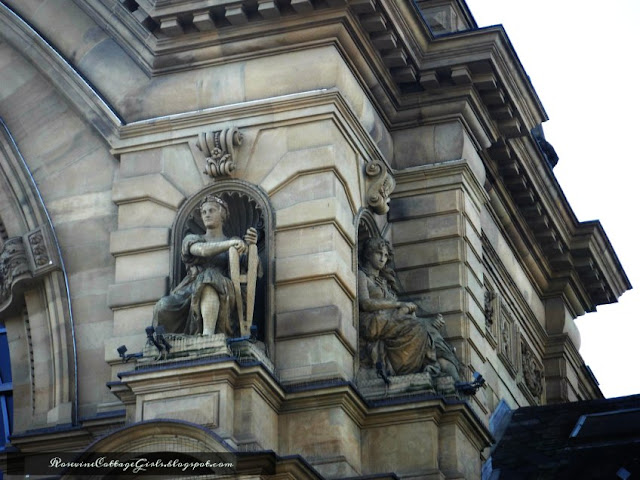 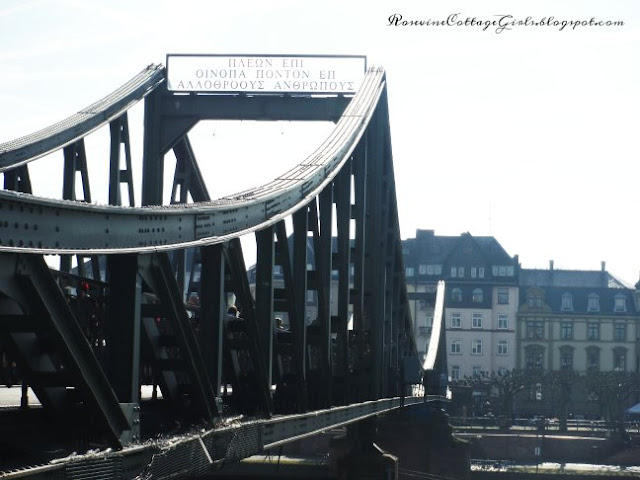 It is here where I noticed the locks on the bridge again and talked to Tracy about them. The history of the padlocks dates back to a Serbian tale during WWI. 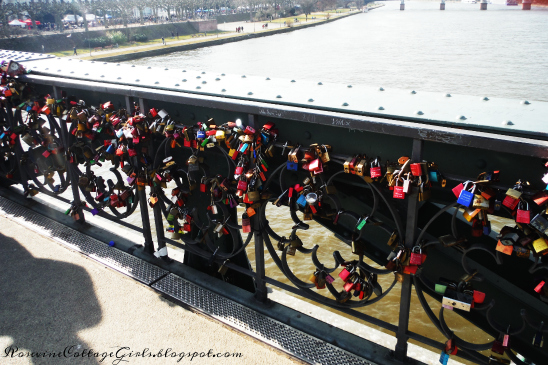 A local mistress named Nada, who was from the spa town called Vrnjacka Banja, fell in love with a Serbian officer named Relja.

After they have committed their love for each other, Relja was sent to Greece during the war. Sadly while there he fell in love with another woman and broke off his engagement to Nada. She never recovered from the news of her true love, she died due to a broken heart. Young women from that town started writing their names and their loved ones on padlocks and affixing the locks to the railings of the bridge where Nada and Relja used to meet. And in the year 2000, they started showing up on bridges all over Europe.

The Bridge in Frankfurt is called Eiserner Steg and is also known as lover’s bridge.or lock bridge. 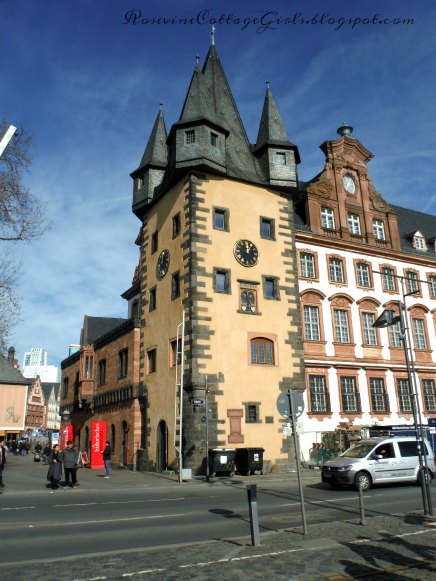 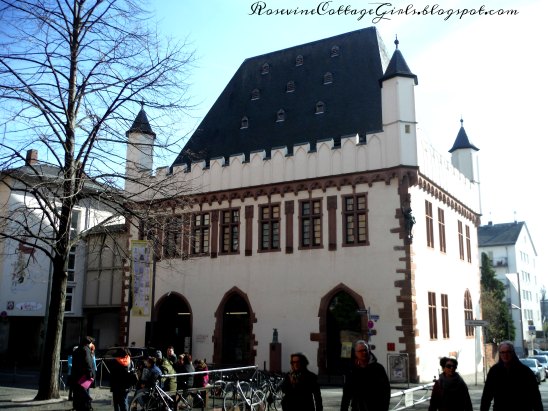 This is Frankfurt’s oldest textile shop called the Linen House  or Leinwandhaus.  This beauty goes back to 1399. It was a place to trade cloth and linen until the 1800’s.
It is now a museum of Comical Art Caricatura Museum. 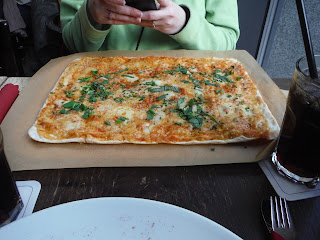 Lunchtime came and we had our choice of fare in this beautiful town. We opted for Italian food and this is what we got.

Pizza,
Pizza
and pasta.
The pasta dish is mine! 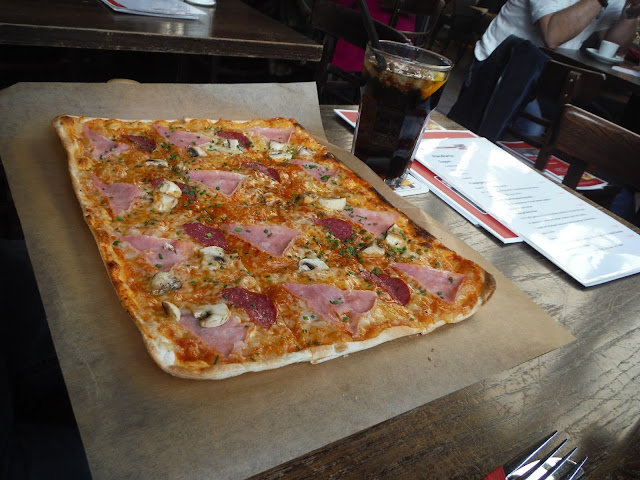 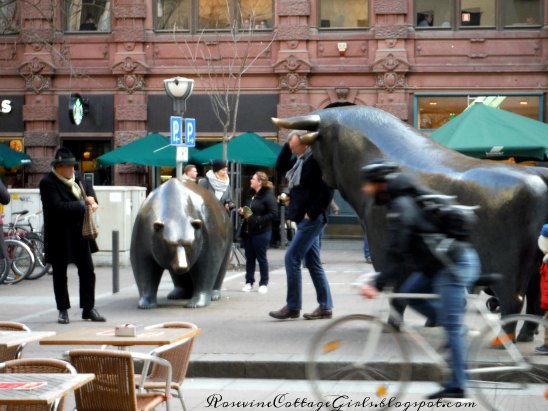 This little place was across from the German Stock Exchange with the statues of the bull and bear outside. The taste was great and the price not too bad. It was good to rest our feet after all of that walking about town.
I am sitting at the cafe here taking a photo of people walking about. It was very busy this day because it was during the Fasching (I will talk about this more in another article.) 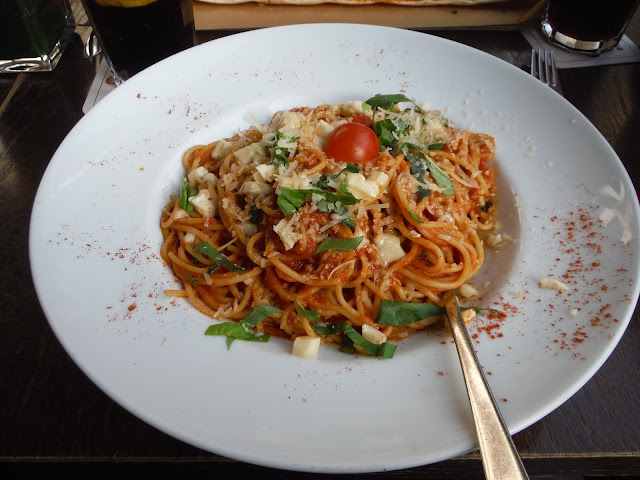 Related Post:Löwenburg Castle – Kassel, Germany
The pasta was really fresh and delicious.
Love the chopped basil leaves on the top and the fresh tomato. It really hit the spot! 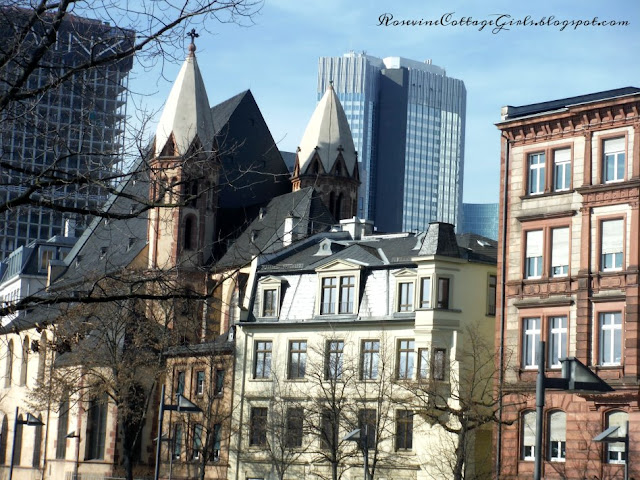 This is St. Leonard’s Church (Sankt Leonhardskirche) here nestled among the other buildings. St. Leonard’s was built originally in 1219 on land that was donated by the Holy Roman Empire. From it’s founding it was an important pilgrimage church for two of such pilgrimage routes went through Frankfurt. One of those went to Jerusalem and the other was called “The Way of Saint James” which led to the church of Santiago de Compostela in Spain. In the middle ages the faithful would walk this route to the tomb of James the Apostle as a spiritual path.
Ledgend says that the body of James was carried from Jerusalem and taken to Santiago and buried.
James is the (James or יַעֲקֹב‎ in Hebrew) in the bible, the son of Zebedee and Salome and the brother of John the apostle. He was also called James the greater.  James was the first of the apostles to be martyred.  Acts 2:2 tells us that he was put to death in Jerusalem by the hands of Herod Agrippa.
The town is rich with history and arts there are museums and galleries that I recommend that you visit.
Historisches Museum Frankfurt
Jewish Museum
Archaeological Museum
and many others. 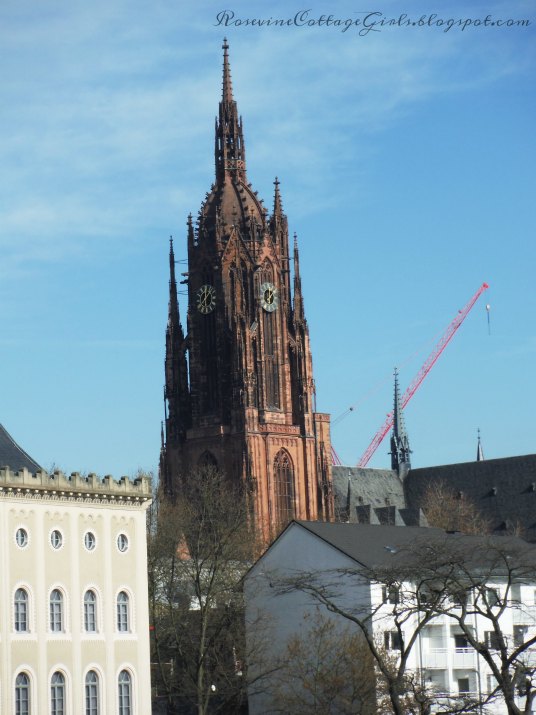 Above sits the Cathedral of St Bartholomew or the Kaiserdom Sankt Bartholomäus.  I will have another article later about this church. 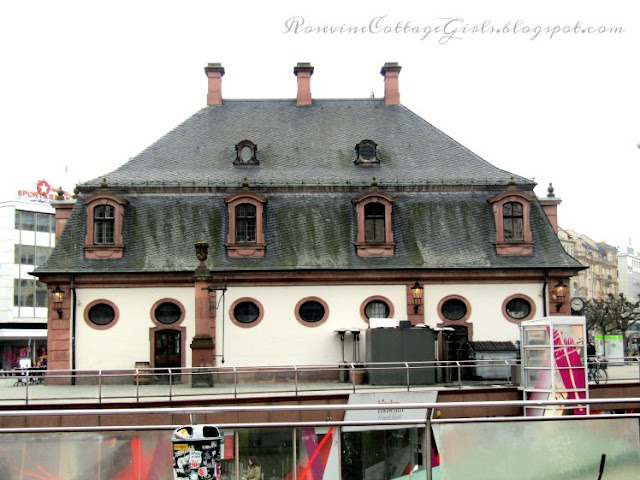 This is the Main Guardhouse or (Hauptwache)  and is from the 1700’s. This was the 18th century police department for Frankfurt and where the military would stand guard. Today it is a cafe on the main floor. 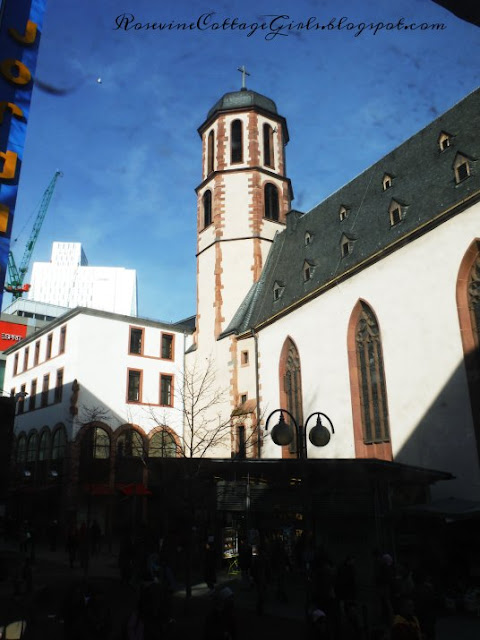 This is the Church of Our Lady or the Liebfrauenkirche. She was built in about 1310 and remains much the same as when she was built visually speaking.
This is a place that in the medieval time served as a marketplace in the town in the 1300’s and there were sold glass, pottery, candles and household goods etc. and was a very important place in the town.Wigelo of Wanebach and his wife Katharina von Hohenhaus donated the chapel to the community and it was known as St Catherine’s and also Wigelskapelleat the time.  Wigelo was the administrator of the chapel until his death where his wife took over control.

In 1325 the construction began on the church to enlarge it and it was then that the Arch Bishop of Mainz ordered the name changed to Liebfrauenkirch. The new structure also included a monastery. On March 22, 1945 in the massive air raid that hit Frankfurt the church was hit and completely burned out and the monastery was badly damaged.

When the war was over the choir received a temporary covering but the rest of the church remained without for the next ten long years. 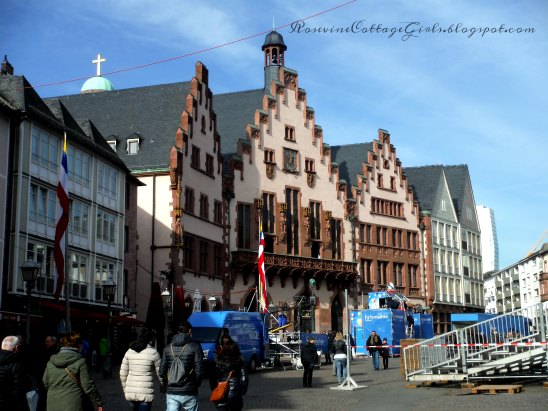 This building is the Römer.  This is where the city council of Frankfurt meets and for more than 600 years the future of Frankfurt has been decided from these halls by it’s leaders. In the year 1405 they purchased the buildings here from the merchant Kunz for “800 guldens of good Frankfurt currency in cash.”  Since then they have added other buildings to the original.

These buildings suffered serious damage in 1945 when the city was bombed in WWII.  Rebuilding efforts began that same year and they were not reopened until 1955. It was not until 1975 that the three -gabled façade was added once again to the face of the building. 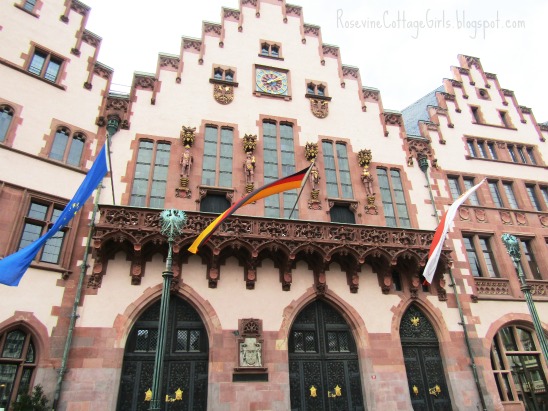 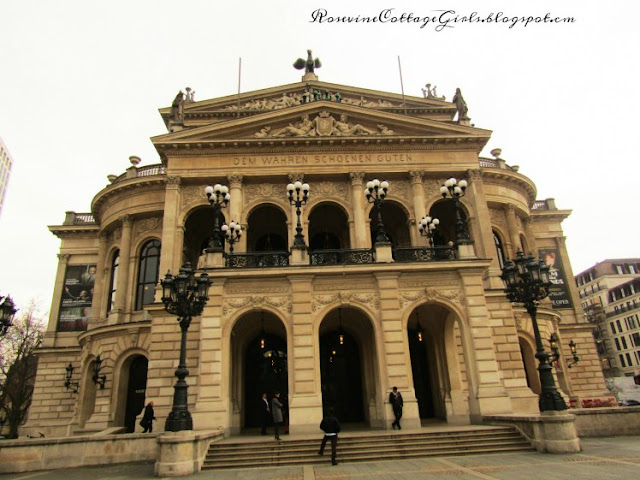 This old opera house is a cherished piece of history in Frankfort.  Bombed down to it’s foundation the people of Frankfurt cried out for this beloved place to be restored to its former glory.  Once again a home for the symphony, concerts, meeting and balls. It is a place of beauty. 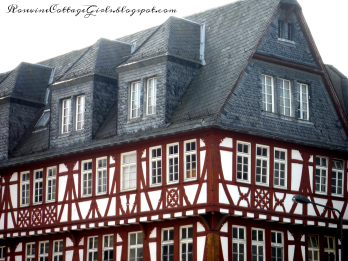 In 1933 there was a boycott in Frankfurt against the Jewish people and as time went on the restrictions on them began to tighten. Nov. 10, 1938 the largest synagogues were burned to nothing. At this time many of the Jewish people living there began to leave the area. Those that did not were sent away notified with only minutes to grab what they could and leave to the Lodz Ghetto in central Poland. The Lodz ghetto was the second to the largest Jewish ghetto’s next to Warsaw. Eventually those were taken off to Dachau and Buchenwald concentration camps. In the year 1933 there were 33,000 Jewish people that lived in Frankfurt as noted by the government records of the area. In 1945 there were only just over 600 that remained in the area.

The Eighth Air Force dropped 12,197 pounds of bombs on Frankfurt’s town center killing 5500 people (see videos here  and here – note  we do not own videos  nor any rights to them, we are merely providing the links so that you can have more information.) they fell in the largest Medieval center in all of Germany.
For more information about the Lodz Ghetto click here: to be taken to the Jewish Virtual Library Site.

Thank you so much for taking the time to read this article about the beautiful city of Frankfurt. Please comment and let us know what you think. Your opinions are so important to us!
Don’t miss our Travel section with our other adventures!
This article contains affiliate links. Affiliate links cost you nothing extra but help to support the Rosevine Cottage Girls so we can continue bringing you recipes, travel posts, garden and farm posts and so much more.