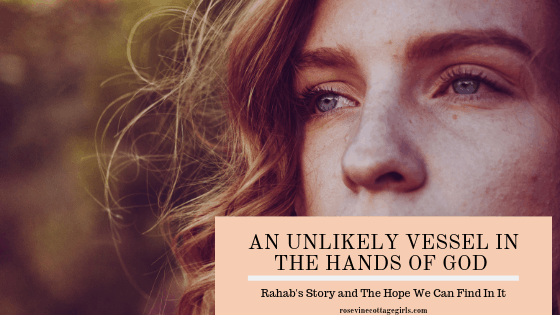 I think for the most part when we come to Joshua 2 we tend to skip over Rahab’s profession or avoid Rahab entirely. She’s an unlikely vessel, we try to whitewash it a bit. Maybe read over that bit of scripture a little faster, the wording can make us feel uncomfortable so we try to soften it.

Contents hide
1 Unlikely Vessels In The Hands Of God
2 Something’s Changed
3 He Knew It Was Coming
4 She couldn’t live like this any longer
5 Finding ourselves in Rahab’s Story
6 God met her where she was
7 The perfect one for the job
8 Related posts:

Unlikely Vessels In The Hands Of God

We have to wonder why God would choose to highlight Rahab in this chapter. Surely there was someone more qualified than this bad girl of centuries past, anyone, more qualified. Less messy. Someone, with a better reputation.

We look for a Snow White or Cinderella or maybe an Esther, but instead, we get Rahab which means insolence, contemptuous, ill-mannered, uncivil, disrespectful, and offensive. Her very name was drawn from a pagan god ra from Egypt, can you find any more of a misfit to take the lead in this story? But God places her in the lead, in all of her unlikely unusable mess.

The Bible doesn’t go into her story, or what brought her to this place, what pivotal thing had changed in her life that when jumping into the story she has hidden the spies on the roof of her house an act that was treasonous and would have cost her life. 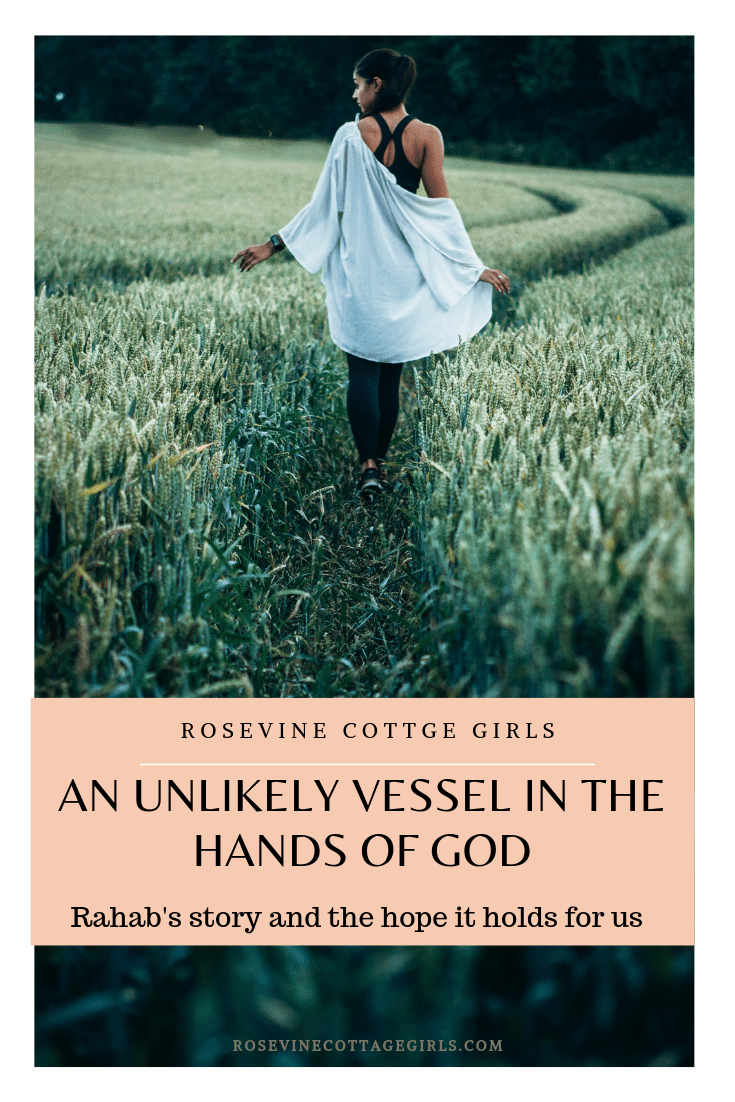 When we reach verse 9 it’s obvious that something has changed as she declares boldly that the Lord has given the Israelite’s this land, but she goes further than that, her eyes could have told her that.

The Israelites have been wandering the desert for 40 years, the stories of the Lord’s provision and protection has been spreading this whole time, so now that we reach this point everyone has retreated in fear to Jericho, Rahab’s town and shut the gates behind them. This is the same Jericho that in just a few chapters it’s walls will fall. She goes on to say, “the Lord your God is God in heaven above and on the earth below.” This is a heart change, not just what her eyes have seen.

Rahab knew what she was, she could have allowed her worth, her identity, to stay chained to that life. She could have continued living the same old way, kept staying in her comfort zone, remained in Jericho, remained just one more woman forgotten in the annals of time.

Something happened in that stronghold, in the walls of Jericho, in the weary hours of the night, so that the idolater could recognize the voice of the one true God. Hear His call and step out of the status quo, come out of the normal she had been living for so long and into His purpose for her life and in the midst all of the generations to come to the end of time. Not by accident, not by chance, but by divine plan. 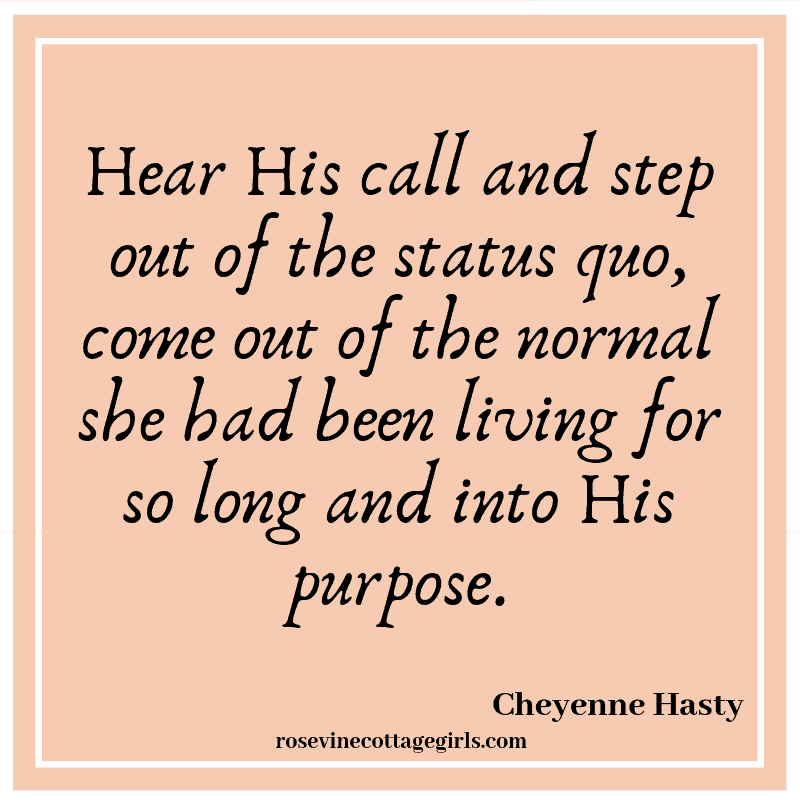 He Knew It Was Coming

This moment is no surprise to God, He knew it was coming since before she was born, every day He looked at her living out of the same mistakes, the same broken choices and He knew that this day was coming. I wonder did He count each step that took her closer to this meeting, did He shush heaven and direct their attention to this moment, this encounter that would set her on a new path?

We are so quick to declare our mistakes, our messy lives unusable. We look at the choices we regret, the places we’ve stumbled, the places we’ve fallen short of the mark and label them too big, too bold, too messy for God. But God doesn’t see it like we do. Have you ever noticed that we tend to be our own worst critic? 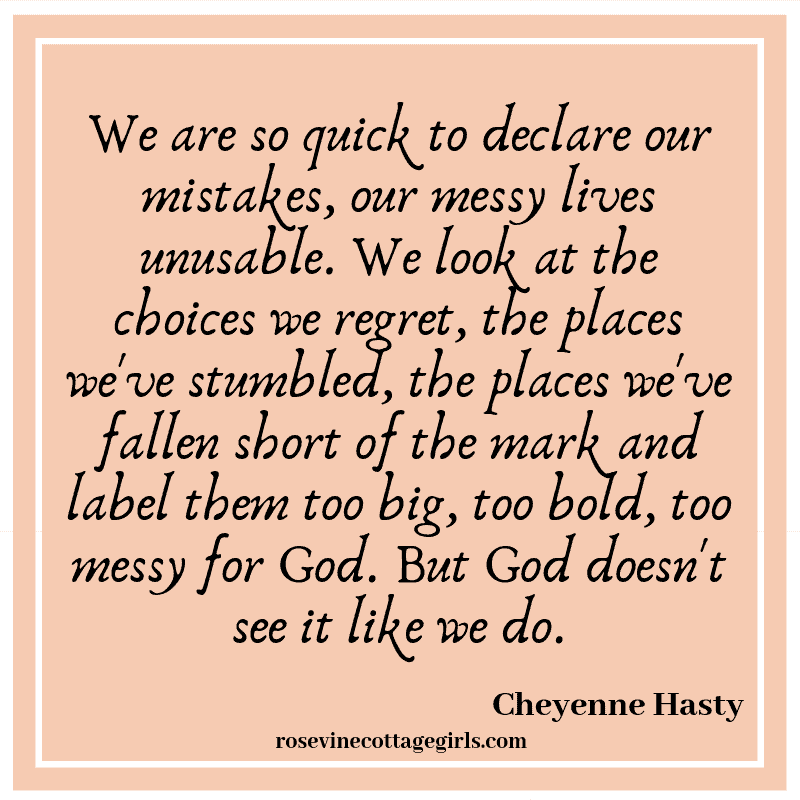 Perhaps like the woman in the New Testament with the issue of bleeding she was desperate, something had to change, she couldn’t live like this anymore. She’d heard the reports of what the Lord had been doing, she had witnessed the terror that went before the Lord’s people- when the Lord is with you it doesn’t matter what is in front of you it will part-.

She knows what’s coming, she’s frightened, she knows what this God of the Israelite’s can do, and she is daring to hope. She can’t see the whole picture, she doesn’t know that she ends up in Jesus’s family line.

If the Israelite’s had entered their promised land with Moses, we never would have found ourselves here looking at Rahab, in all of her messiness setting the record straight once and for all.

Finding ourselves in Rahab’s Story

Perhaps we aren’t told all of Rahab’s story so that we all find a bit of ourselves here. A piece of that insecurity we’ve kept buried for so long whispering doubt to our heart- “He can’t use you,” “You’re too broken,” “Your too messed up,” too “unforgivable” to have worth. Perhaps it’s a word that was planted in your heart as a child, declaring you worthless, purposeless, or unwanted.

We see our messiness and maybe we can identify with this woman. Maybe we aren’t in the same situation, our scars aren’t exactly the same, but we connect with this woman who dared. Dared to challenge what everyone saw her as and instead of being only known as the harlot she steps up and becomes one of the few women known by name in scripture. 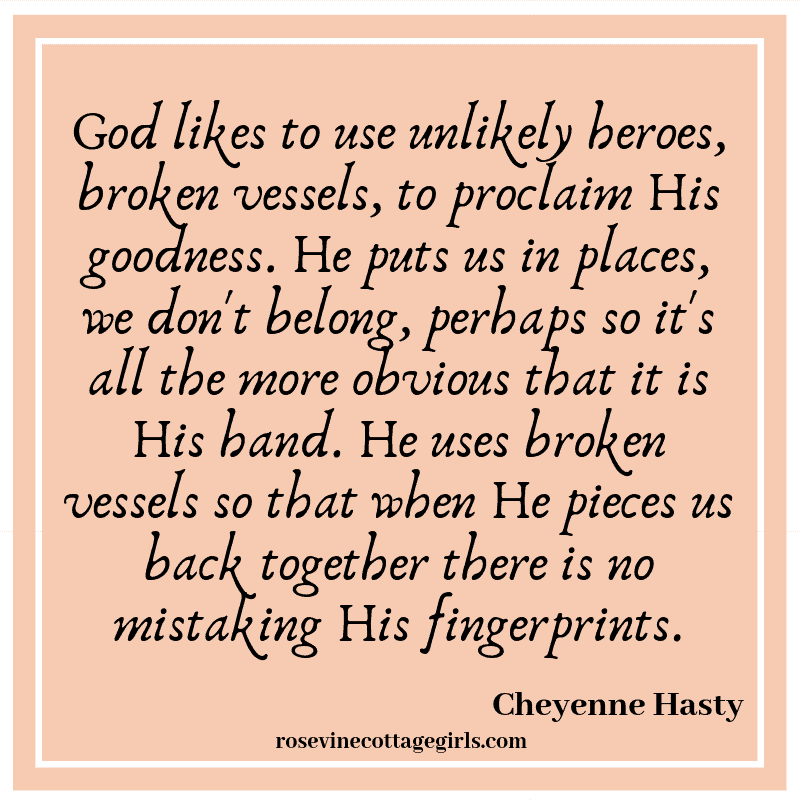 God met her where she was

God didn’t change her before He used her. He didn’t wait until she had cleaned up her act- instead, He meets her where she is, like the woman at the well in the New Testament and draws her into the greatest story. God likes to use unlikely heroes, broken vessels, to proclaim His goodness.

He puts us in places, we don’t belong, perhaps so it’s all the more obvious that it is His hand. He uses broken vessels so that when He pieces us back together there is no mistaking His fingerprints.

Sometimes the very thing we are trying to skip over is what God is trying to use to set the stage. No matter how bad you’ve messed up, how messy your life has gotten, what titles you’ve been carrying like Rahab He can take them all and replace them with a new name, son and daughter. 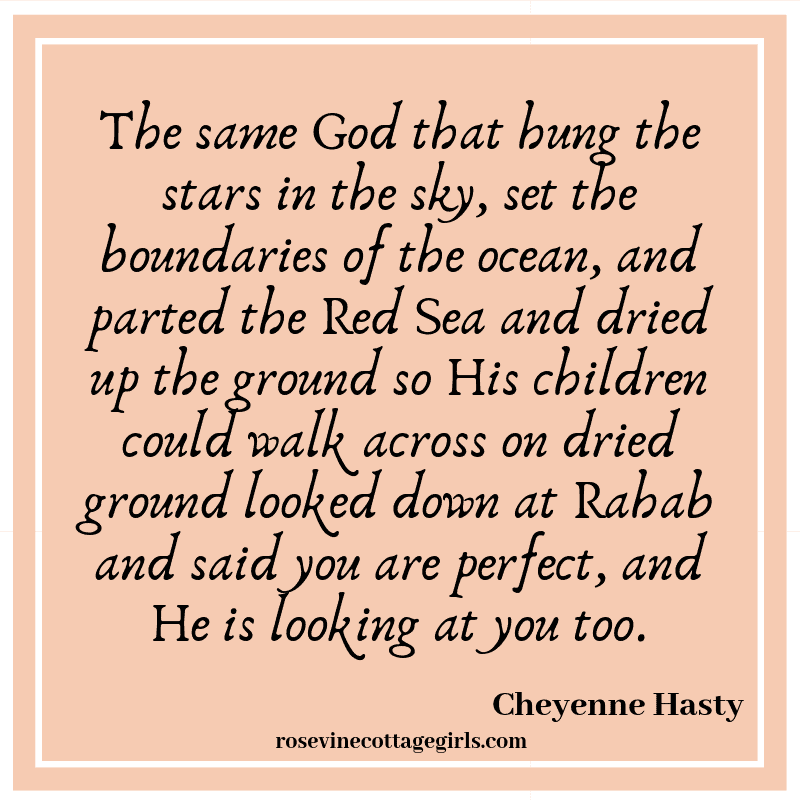 The perfect one for the job

The same God that hung the stars in the sky, set the boundaries of the ocean, and parted the Red Sea and dried up the ground so His children could walk across on dried ground looked down at Rahab and said you are perfect, you are going to take this one, I am going to use you in ways you never imagined and I have a destiny for you that will change the world. How incredible is that?

The creator of the heavens and earth looked down and pinpointed one insignificant, messy woman and placed her in a role that would change the world and He’s looking at you too.

Before you go, check out these other posts!

2 thoughts on “An Unlikely Vessel In The Hands Of God”