Welcome back to journey Germany for yet another trip down history lane… When I got here there were two places I that wanted to go to, the villages of Istha and Weisenheim am Berg. 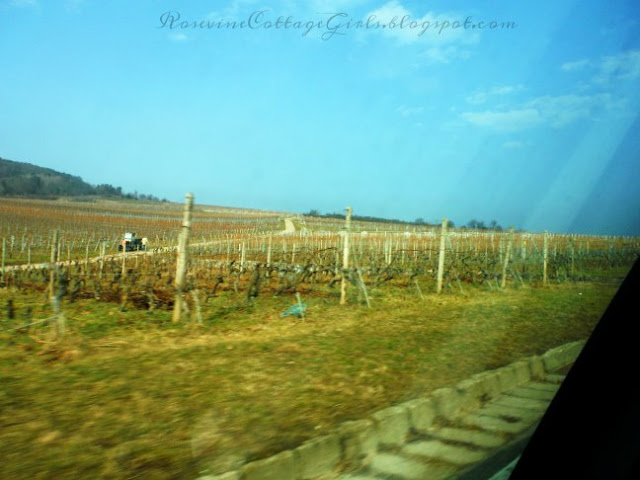 Last week we traveled to the town of Istha, as you recall a very small town northwest of Kassel. That is where my 9X thru 12X great-grandfathers were born and raised. It was an awesome feeling walk the ground that they once did. 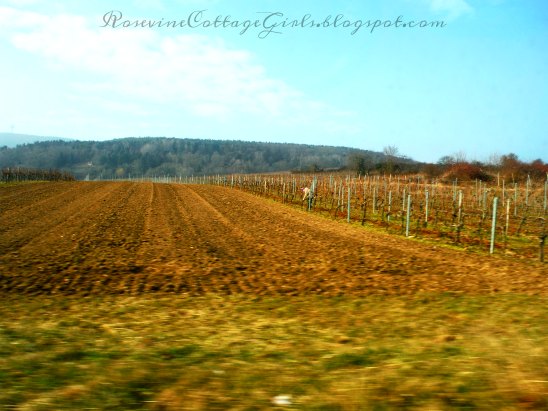 Today we get to go the other city……. Weisenheim am Berg. This is where my 8X great grandfather moved to and met my 8X great grandmother, married her and lived until they made the journey to catch a ship to the United States. 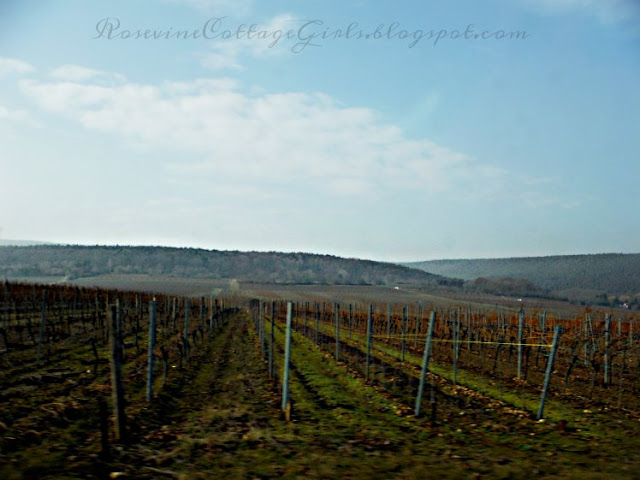 This town when I googled it was just over an hours drive from our hotel.So I planned on hitting this town then drive another hour south and go to Berg (Castle) Klopp. I want to get there even if it doesn’t have anything to do with my family. 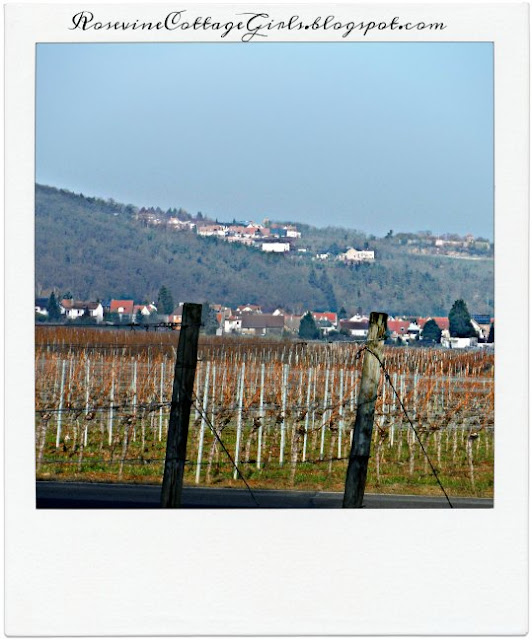 It is around 9 AM here and we are waiting at the hotel to get the keys to the car and then we will be heading out. This trip will take us down south of the hotel. We entered the address into the GPS for the car but it routed us a completely different way. The GPS way took us two hours instead of just one.

Click the photo above to play a video of the journey.

We took the wrong way a couple of times and got turned around a little but it was a beautiful drive. It is still winter here in Germany but it is gorgeous. We continued south towards Frankfurt and then headed west towards Bad Durkheim. 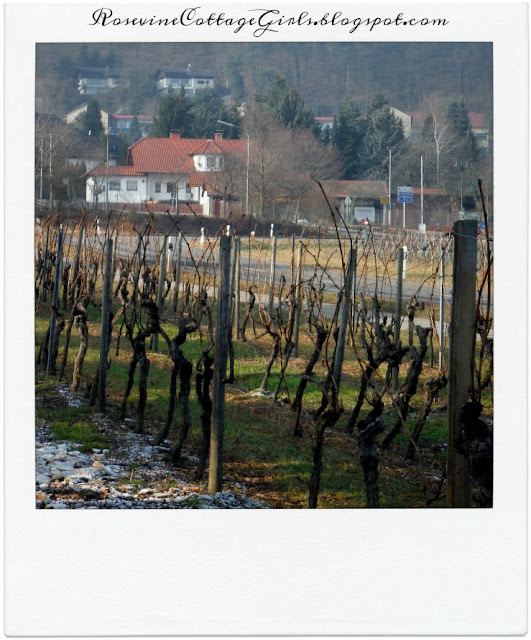 We passed the village of Worms which is where the Protestant reformer Martin Luther was called to an assembly with the Holy Roman Empire called a diet. This meeting was called Diet of Worms and it didn’t have anything to do with the wriggling creatures but with the future of the Protestant church. This took place here, April 16-18, 1521. Pope Leo X had just put out a final ban on Luther and told Charles I to arrest him and be done with the Lutheran movement. Charles I, was a strong Catholic (he ended up giving up the crown and becoming a monk) and wanted the support of the Pope, but also knew to make such a bold move would hurt him politically. The majority of the people of Germany strongly supported Luther. Martin Luther was promised safe passage and that he would not be put to death but would only face excommunication if he didn’t recant his ideas. He came to this meeting gladly, ready to defend his doctrine. It took Martin 10 days to travel the 300 miles from Wittenberg, a town close to Berlin to the village of Worms. At the diet, they placed the 25 books that Luther had written before him and asked him if a) he had written them and b) if he recanted them. The story is an interesting one and I suggest you delve into it further. In the end, Luther said that unless they could refute his doctrines by the Word of God he could not and would not recant.

The diet ended and Luther was given 21 days of safe passage to get back to Wittenberg and then he would be considered an obstinate heretic and that would most likely mean a death sentence. He accepted and made his way back home but along the way, his friend Frederick the Wise of Saxony, arranged for his soldiers to kidnap Luther and bring him to Wartburg castle to keep him safe. He stayed here under the name Junker Jorg (Knight George)

and it was in that castle that Martin translated the entire New Testament from ancient Greek into German in only ten weeks. It was not the only German translation at the time but it was the most used. 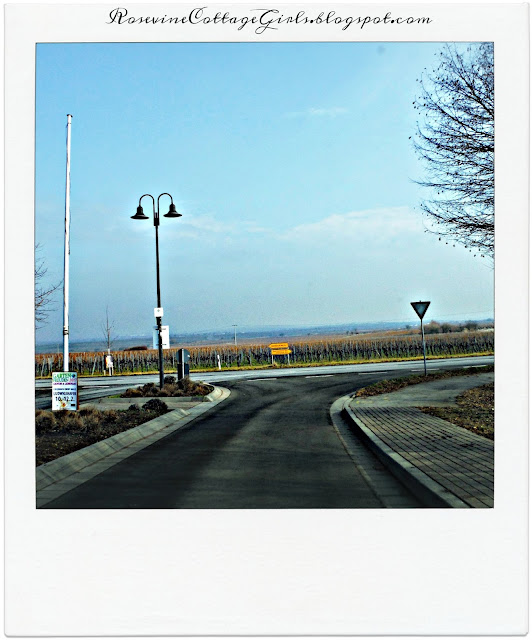 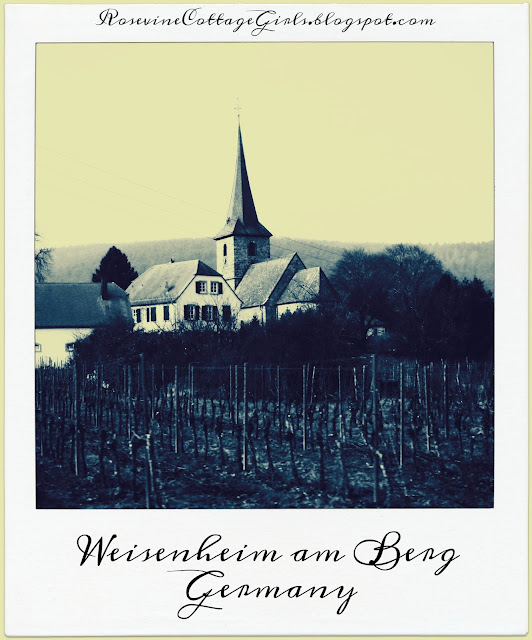 Then there it was the town where they got married. The streets where they once walked and their young children played. 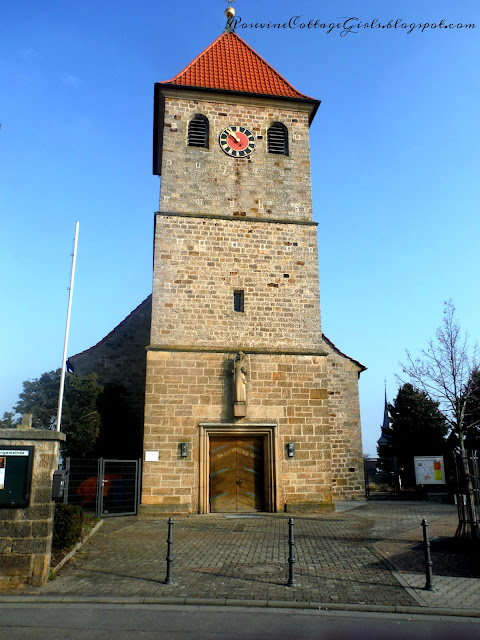 The streets are narrow like most small towns here in Germany. 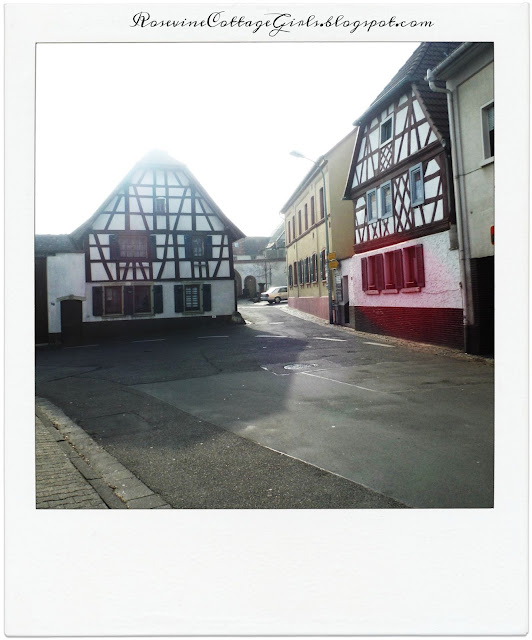 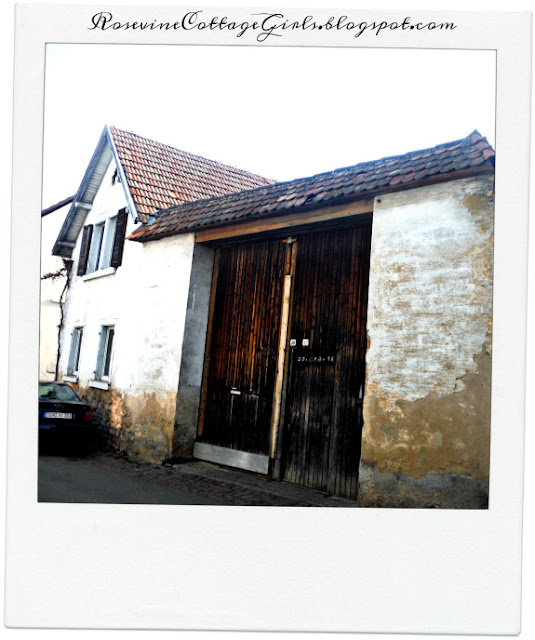 We drove till we found a place to park, right next to a church and a farmers market (there weren’t many set up yet). Could this be the church I am looking for? 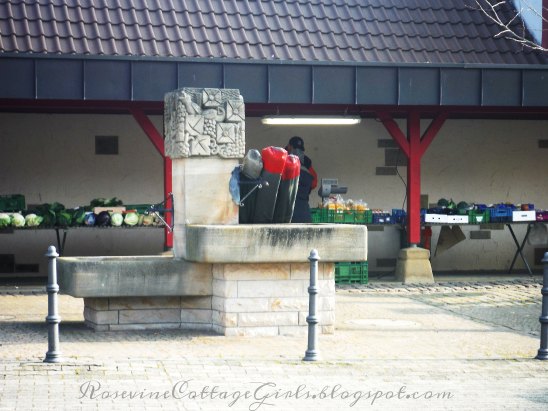 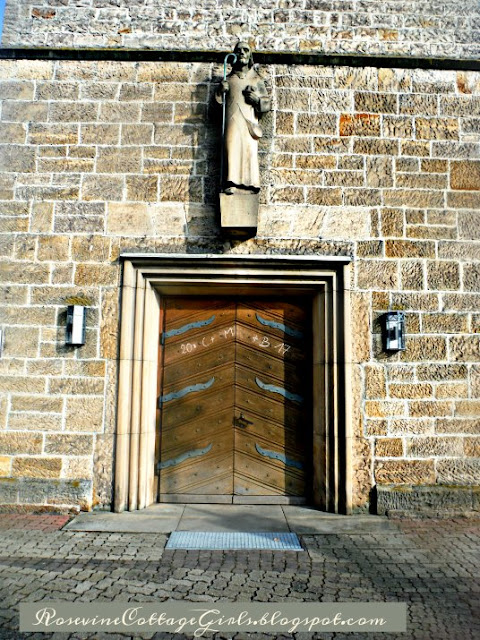 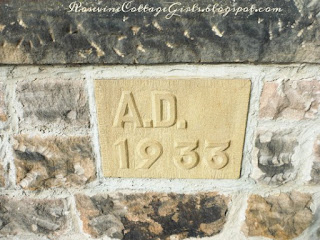 We walked to the church and started looking at it and taking pictures when I came upon a plate on the side of the church….. it read 1933.
So no, this wasn’t the gem I was looking for… so when we were getting close to the town we saw an older church on the outskirts of town. We started walking in the direction of that church. So now here I am walking the streets that 8X great grandfather and mother walked upon. Looking for the church that they were members of and got married in.
We took a left turn down a street and we run into our first winery….. 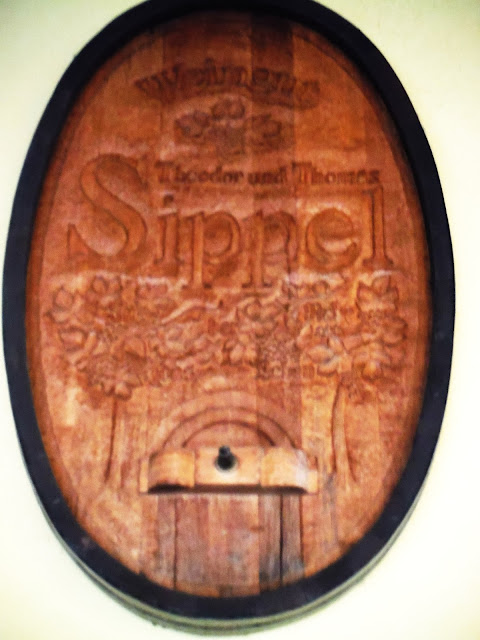 We walked up to the door and a lady came out….. We asked her very politely….. Are you open? (In English) ….. her reply a very stern NEIN! …. so we looked at each other and then asked if we could buy some wine….. again her reply …….Nein….. I don’t think she wanted us there. So after this reception, we went down the street and followed it to the end.

It came to the end of town and we realized we needed to turn right at the last street.We turned around and walked back up to that street and this time we took it. 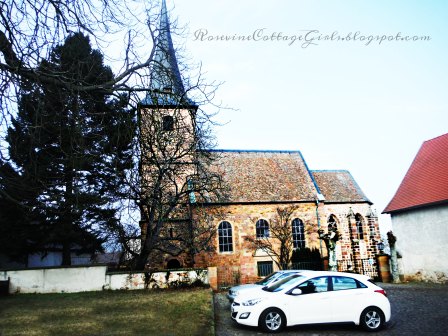 We followed it around a curve and an old church was in our view…. Could this be it? It looked old enough. In the awe and wonder, I started taking pictures of it, spent at least 5 minutes walking around the church looking and taking pictures of the church, the land and anything else I saw. 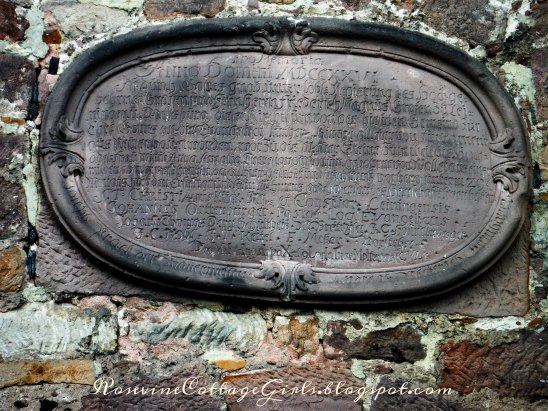 On the side of the church had a date in Roman Numerals  MDCCXXVI…. Yes, this could be the church I was looking for. We didn’t see any other churches old enough to be it…. 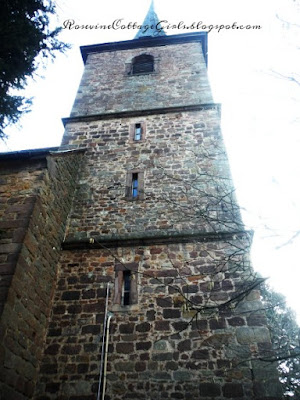 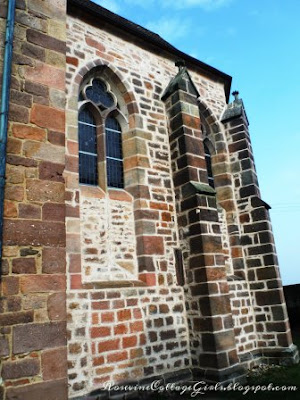 As I walked around the church I wanted to talk to them and see this town thru their eyes. 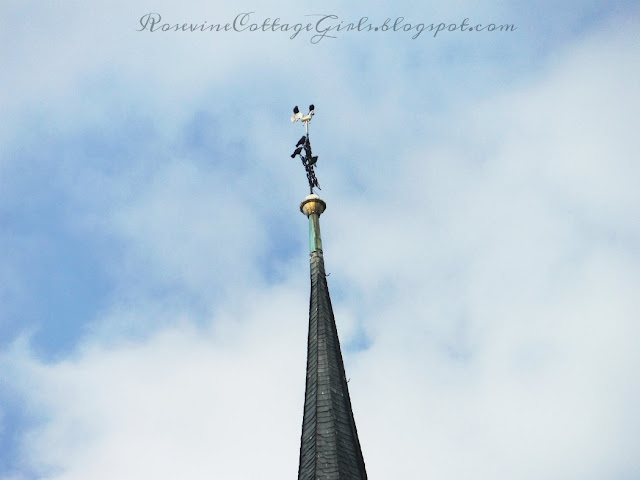 Feel life through them… 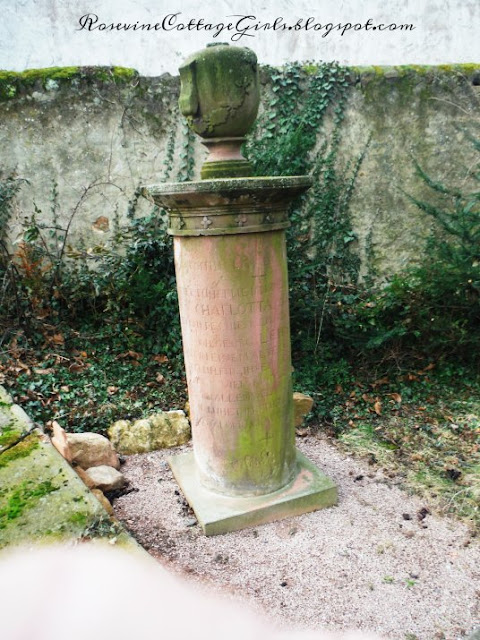 and I prayed for my family back home and wished so much they were on this adventure with me. 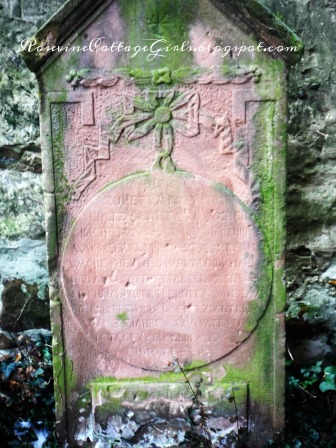 I spent several minutes alone then we started walking back towards the car headed for our next destination. 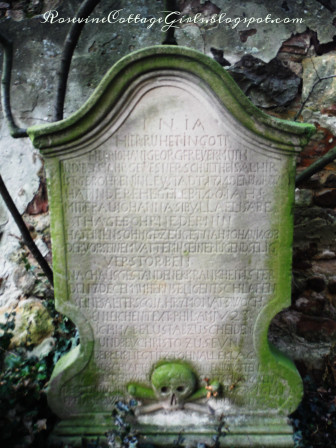 Before we got to the car we asked a gentleman if he spoke English, and of course, he didn’t but a young lady asked us what we needed in English. I told her about what I was looking for and the time period and she pointed at the church we just left saying that would have to be it… 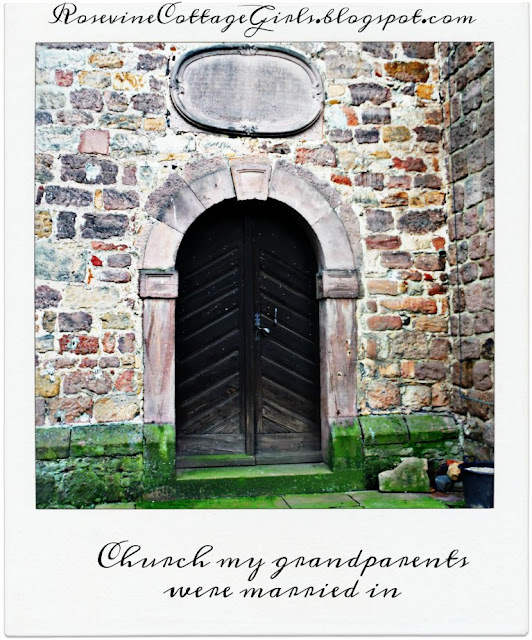 I cannot begin to tell you how excited I was! I had found what I was looking for at last. Here was the church my family worshiped in. The church that my grandparents Jorg Valentine Clapp and Anna Barbara Steiss on August 24, 1723, exchanged their vows and the doors they walked through, newly married and full of hope for the future- surrounded by their family and friends. I cannot believe it! I am here at last! 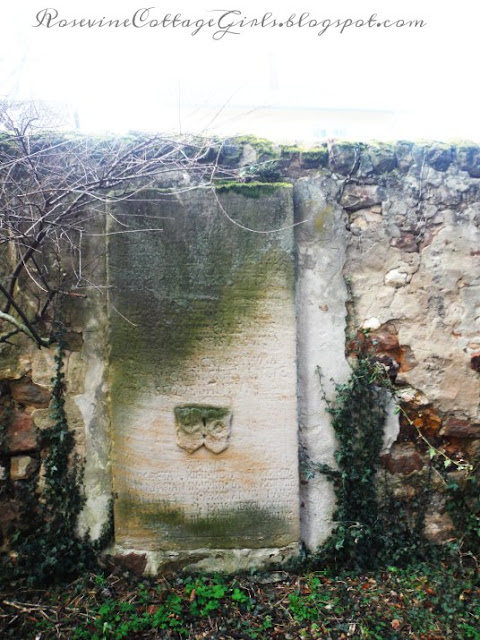 Now I asked her about the last name seeing if there were any left in this little town…. sadly she said she doesn’t recognize it. So the first part of my adventure for the day was complete.
Before I set out for this trip to Germany there were 2 places I wanted to make and now I have done it….. Istha and Weisenheim am Berg have been visited. And for now, the rest of this trip will have to wait until next time we meet again. Thank you and God Bless.
End Of Log.
Mr. Cottage