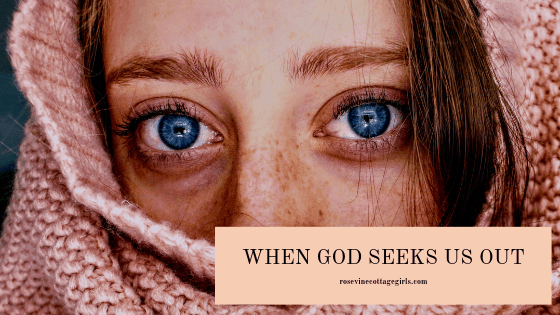 How often I’m surprised by God’s priorities– because I’ve rushed ahead instead of stepping in tandem and letting Him lead. I find myself wordless, breathless, awestruck in the face of His goodness.

They went across the lake to the region of the Gerasenes. When Jesus got out of the boat, a man with an impure spirit came from the tombs to meet him. This man lived in the tombs, and no one could bind him anymore, not even with a chain. For he had often been chained hand and foot, but he tore the chains apart and broke the irons on his feet. No one was strong enough to subdue him. Night and day among the tombs and in the hills he would cry out and cut himself with stones. Mark 5:1-5 NIV

Perhaps… perhaps one night when this man was up crying on one side of the lake, Jesus was up early on the other praying. His cries would have echoed over the water, and maybe hearing his cries Jesus decided to go seek Him out like the woman with the issue of bleeding.
I’m left speechless, as He stops everything for one. One little forgotten, inconsequential, person. And yet we find that he is far from unimportant. As Jesus and the disciples crossed the lake from their home turf to the side of the Gentiles, to seek this man out a storm arose. The waves crashed over the boat, the storm raging around them keeping them from the other side of the lake. I can’t help but wonder if this man sensed the significance of the storm. If hope flickered slightly when he saw that boat tossed by the waves.
Have you ever noticed that hope can be eclipsed by the storm? We know there is land on the other side. We know He’s promised to see us through- but the storm is so big, that we lose sight of the hope coming across the water.
Sometimes the storm doesn’t mean that we are running from God like Jonah, sometimes it means we are headed straight for Him. Sometimes the storm is to keep us from seeing Him on His way across the water for us. Sometimes it’s to take our eyes off grace ready to stop everything to come out and see about us. 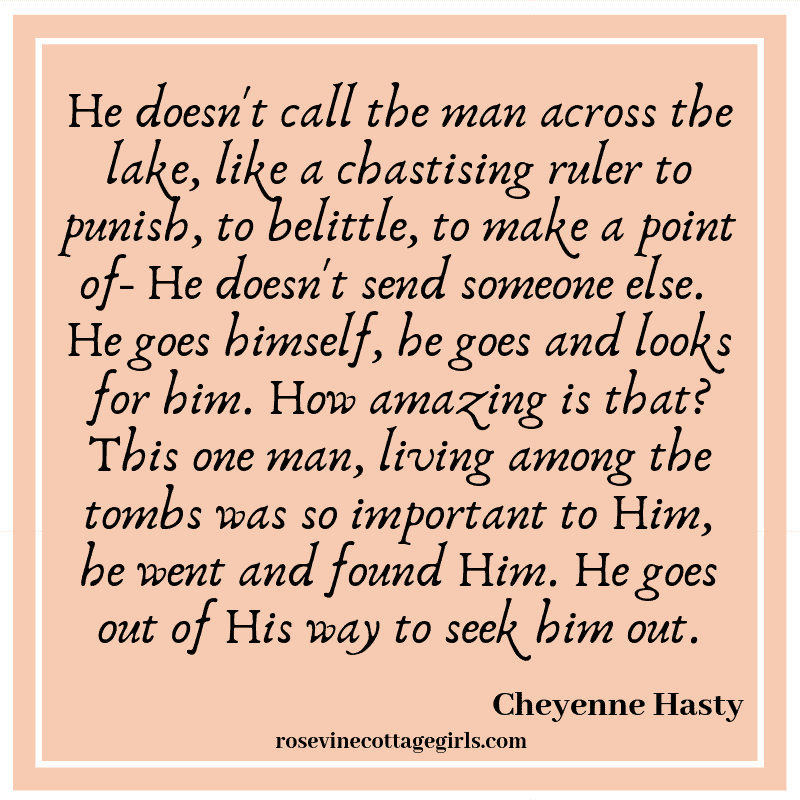 He doesn’t call the man across the lake, like a chastising ruler to punish, to belittle, to make a point of- He doesn’t send someone else.  He goes himself, he goes and looks for him. How amazing is that? This one man, living among the tombs was so important to Him, he went and found Him. He goes out of His way to seek him out.
Sometimes the devil uses the storm to keep us locked away, to keep us tied up, to keep us from His calling. You were on the devil’s hit list before you were born. He doesn’t want that boat to ever reach you. The devil knows where to hit, where to attack to make you push away His presence. There were things strategically placed in your family to keep you from Him. To keep you from that boat, to keep you from the one who will set you free. To keep you from your calling. 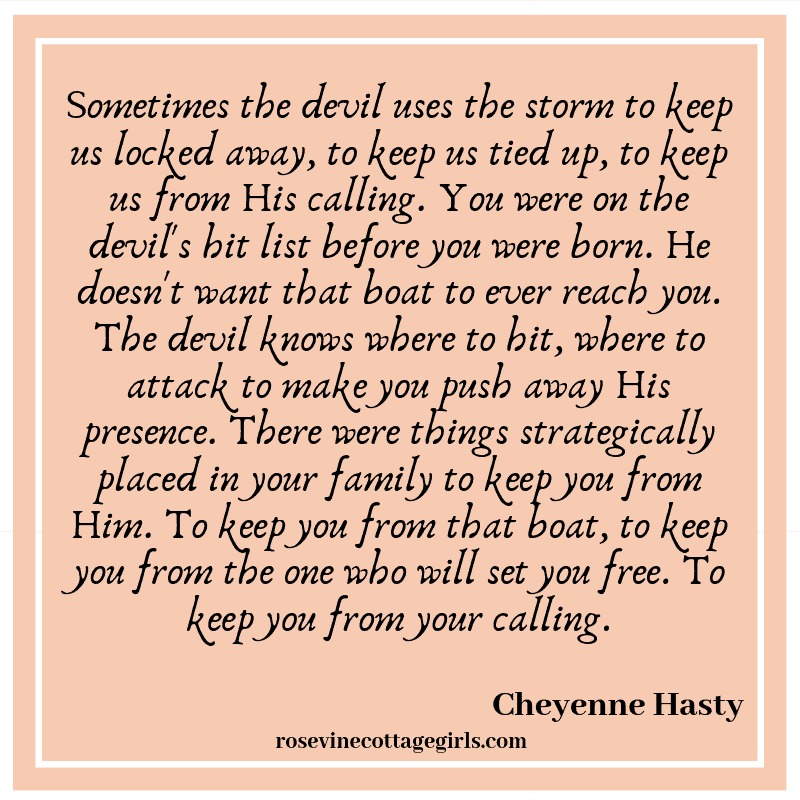 You see there is a more important question than “If you will survive the storm”- He’s already promised you the dry land on the other side. You can’t be lost in the storm because He’s promised to see you through. A more important question is “Why did you survive”. What was so important that the devil sent a storm to keep you from reaching it?
You don’t guard what isn’t important. You don’t buy a safe and then keep trash in it. YOU ARE IMPORTANT. That storm makes you important. The devil doesn’t start a storm for someone he isn’t threatened by. He wouldn’t send a storm if he wasn’t afraid of what would happen if you got loose, and stepped into your calling- your storm proves that. 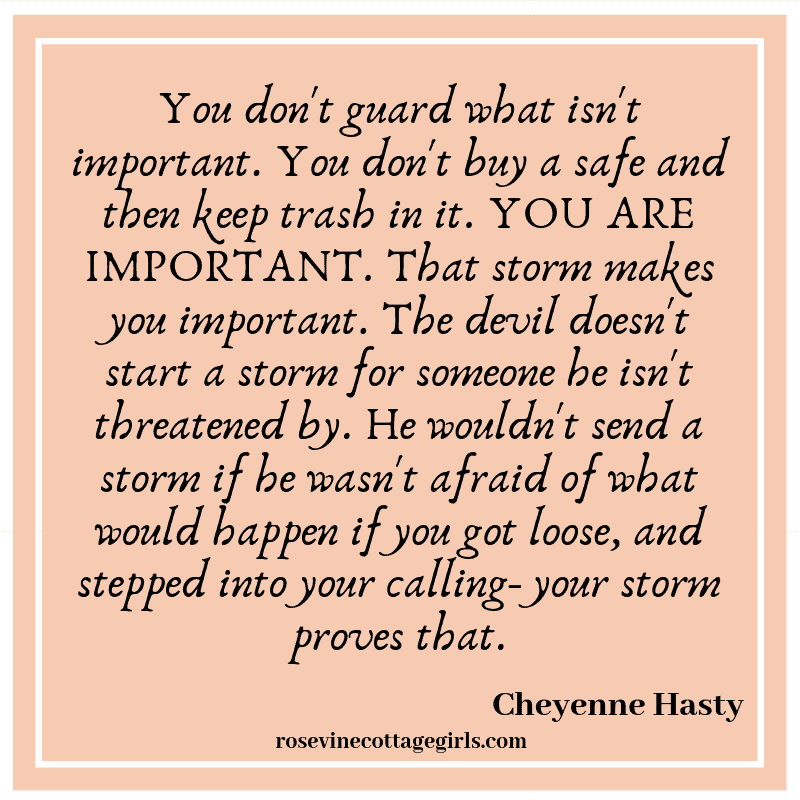 That man crying out day and night, lost, broken, hurting didn’t know that Jesus was on His way. All he saw was the storm raging. All he saw were the waves crashing, and the wind howling. All he heard was the storm. He didn’t know a battle was being waged upon that water for him. He thought he was alone, forgotten, abandoned. The bible says he lived among the tombs, out of control to the point that chains couldn’t hold him, and that he cut himself with rocks day and night.
I’m not sure you can get any more hopeless than this man right here, living among the tombs in the pages of the new testament. It’s easy to gloss over him, it’s so much easier to relate to the woman with the issue of bleeding just need Him, needing His presence- but scared, unworthy to steal his attention from the more “important” things. And yet… and yet… and yet we each have a small piece of this man in us. 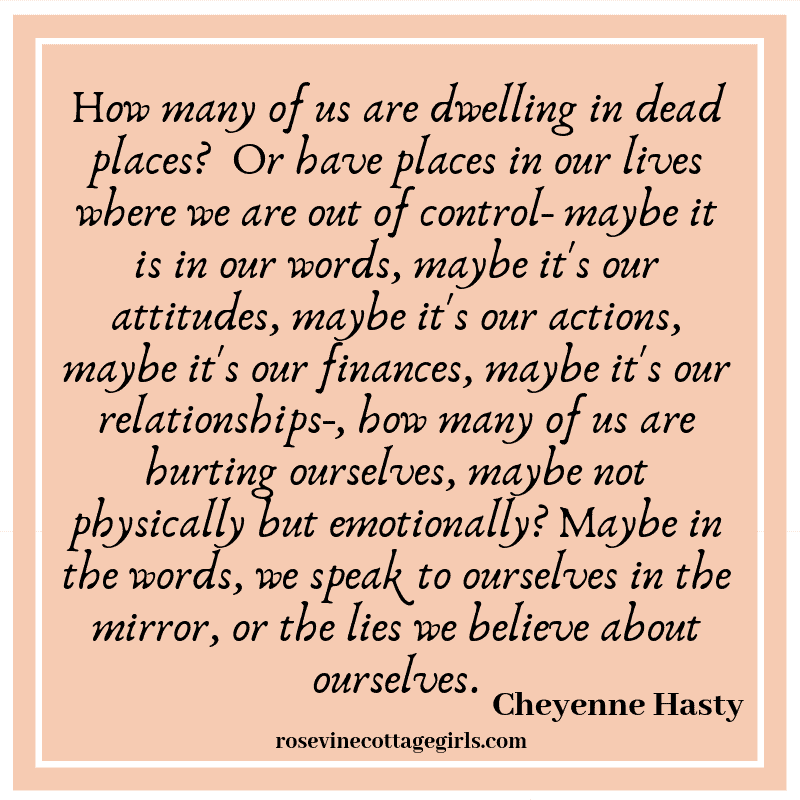 Human chains couldn’t hold him, doctors couldn’t save him, his family, his friends, his neighbors had given up on him. He was beyond human help. It’s easy to miss ourselves in him, to shake our heads and walk away. But how many of us are dwelling in dead places?  Have places in our lives where we are out of control- maybe it is in our words, maybe it’s our attitudes, maybe it’s our actions, maybe it’s our finances, maybe it’s our relationships-, how many of us are hurting ourselves, maybe not physically but emotionally? Maybe in the words, we speak to ourselves in the mirror, or the lies we believe about ourselves.
We may not be possessed,  like this man only identified as Legion, because of the many spirits holding on to him, but oppressed. We all have a little bit of Legion in us, and a storm trying to keep us shackled to it. Bound to the pain and the lies, and the chaos. Trapped in the dead places. But my friend, there is a storm on the lake! 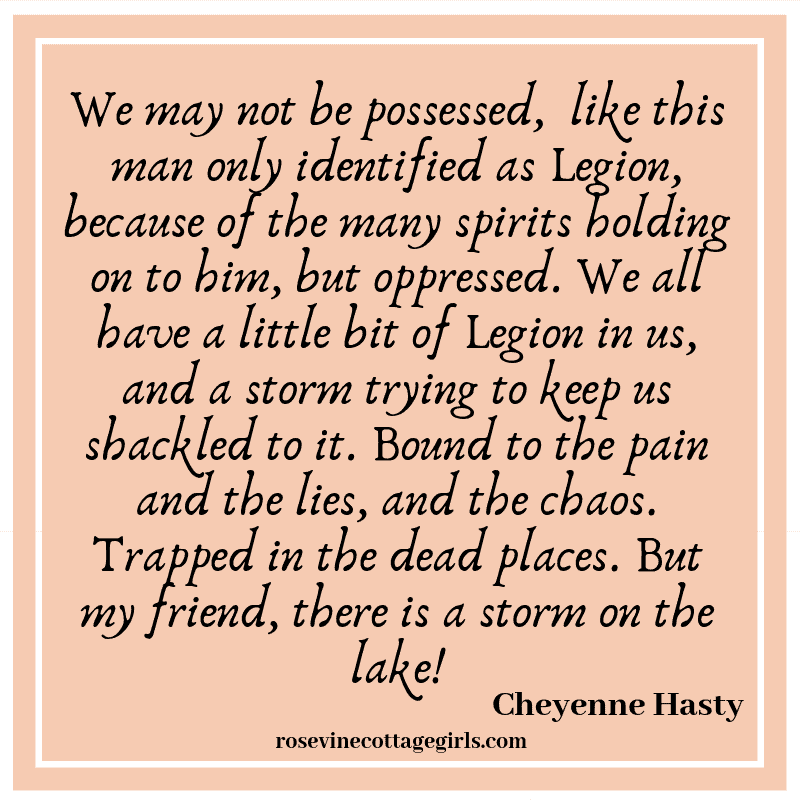 If we back up to Mark 4:39 we find something very interesting about this lake crossing,

He got up, rebuked the wind and said to the waves, “Quiet! Be still!”Then the wind died down and it was completely calm. NIV

Jesus rebuked the storm. He doesn’t rebuke nature for acting as it should, for working as it was created to- and yet this time He does. You are important because of your storm. 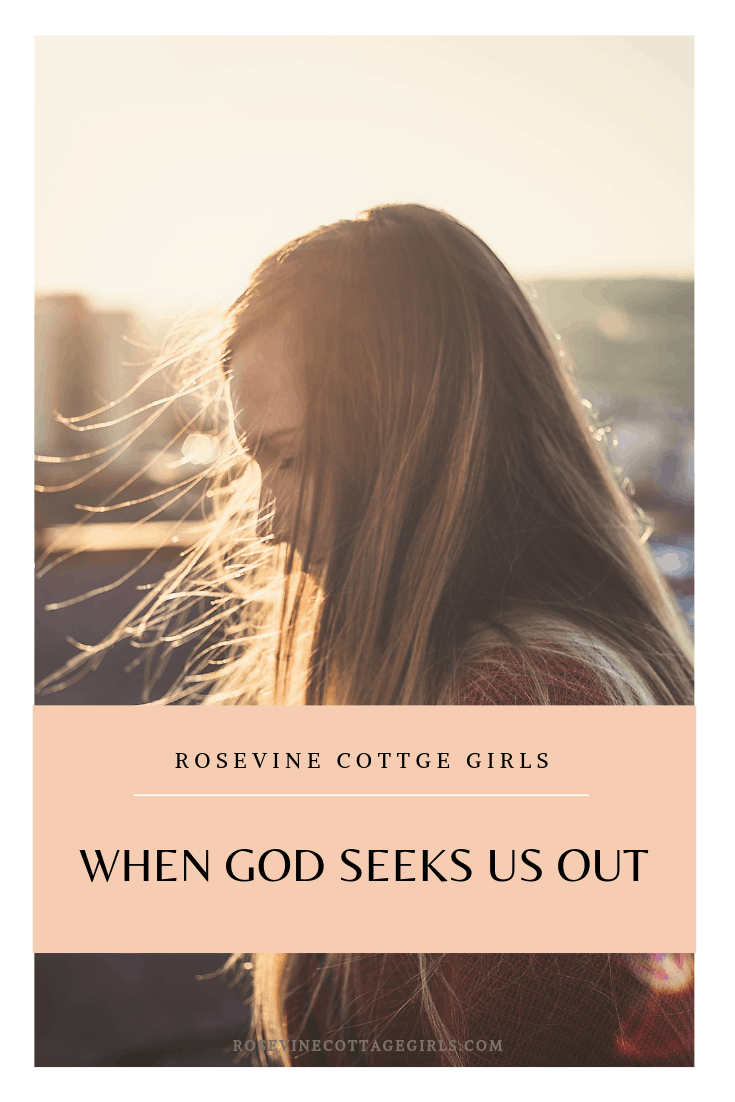 If He went through a storm to save this man, to restore him, to seek him out like a lost lamb and He went to Calvary for you, how important must you be to Him? Grace did what chains could never do. Mercy did what judgment could never do. Love set him free. Love set you free. How valuable you are to Him!

Sometimes God Uses A Sledgehammer
I See You...
Trusting God When Life Is Too Hard